There is a bar far enough away from the Highland Strip to avoid the undergrad crowd, but close enough to find a philosophy grad student boyfriend that challenges your parents' conservative beliefs. It's a bar free and clear of an entertainment district, but still within walking distance of Taco Bell. It's Lucchesi's Beer Garden, and it has some bitchin' neighborhood bar amenities to offer.

The Beer Garden, located at 84 S. Reese, is just off Poplar behind Raffe's Deli. The two were once connected but are no longer affiliated. Raffe's daughter, Basma, now owns the Beer Garden with her husband, Tony Lucchesi. The Beer Garden serves up some awesome food out of a tiny kitchen adjacent to the bar including the Big Bad Blake, a panini that holds the honor of being the most expensive sandwich on the menu, and the Triple H, which the Flyer's own Michael Donahue proclaimed to be the best sandwich he'd had in 15 years.

While we as Memphians always celebrate cheese fries and other cheesy pub fare, a bar menu full of falafel, hummus, and gyros is a welcome change-up. The amenities don't stop with a distinct and delicious menu, either! Pinball is quickly ascending on my list of favorite bar sports, and the Beer Garden has three pinball machines: Batman, No Fear, and The Champion Pub. I've never laid eyes on The Champion Pub anywhere else, and it's just delightful. You get to fight a guy named "Knuckles O'Brien" with a ball. 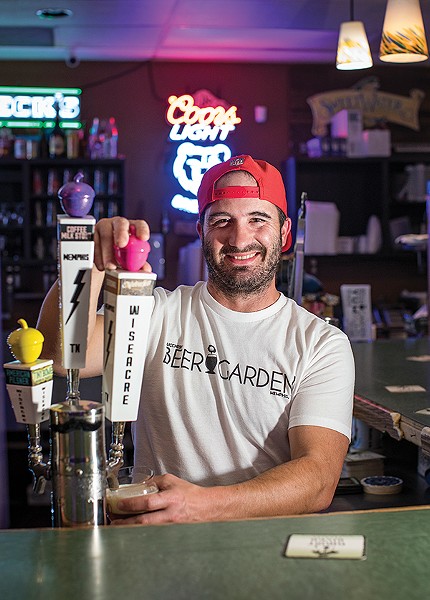 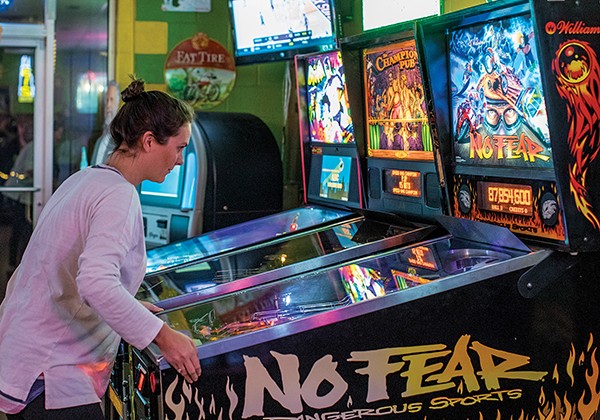 If pinball and gyros don't do it for you, maybe the specials will. Tony has Happy Hour all day on Sunday from 3 to 10 p.m., and Fridays and Saturdays from 10 p.m. to 12 a.m. He and Basma also have a Wednesday pint night and $1 off all bottles and cans on Tuesday nights. Yeah, $1 off bottles and cans! Finally giving the omnipresent "draft night" a run for its money. Of course, the Beer Garden is a beer-only establishment, which is probably implied by the name for the more astute reader. And the beer is everywhere! It's stacked in the corner near a sign that says "Smile, there's beer." It's piled next to the record player where Tony is spinning an Elvis Costello record. They've curated an excellent selection, including local brews, a delicious pineapple cider, and a sour from Earthbound Brewing called "Fuzzy Pickles" that is pretty damn good.

Although the beer selection might be the selling point for someone to visit for the first time, it's the camaraderie that keeps this place busy. Blake, the sandwich's namesake, and Kevin are two of the bar's regulars. Kevin started coming by when he lived in the neighborhood over 10 years ago. He says the Beer Garden is the kind of place where you can make it what you want it to be, whether you want to join in on the conversation or sit alone. That being said, "There are no private conversations at this bar," Kevin adds. He and Tony also told me that a lot of nights when there's nothing else on, they watch all the eclectic sports, like professional darts and curling. For all of us who, during the Olympics, took to Twitter to express our undying love for the sport of curling, this should be welcome news. Wondering where to watch it year-round? Look no further, curling fans.

From the pinball to the food to the pineapple cider and pickle beers, The Beer Garden's amenities offer something for everyone. Tony and Basma allow it to change with the times, too. They've rearranged the kitchen nearly 10 times to better accommodate the ebb and flow of orders. In 2015, they cut out indoor smoking (but still allow it on the patio). They'll put the sound on for some games and then other times, like the night I visited, it's the Grateful Dead that you'll hear. The regulars embraced me, as I get the impression they'll embrace anyone who is willing to join in on the conversation. The conversation is, after all, the most important amenity.