If you want to eat at the newly open Mahogany, it's best that you make a reservation. It's been packed since it opened on November 14th. In fact, one customer has vowed to dine in every seat to take in all the vistas. (It might take a while, as it has more than 120 seats.) It is the place to see and be seen.

Perhaps a more apt word is "scene," as Mahogany is working a movie theme from its name to the decor and menu.

Mahogany is a nod to the movie starring Diana Ross at her (overwrought) chicest. "Rich, dark, beautiful, and rare" is how the day manager Jessica Miller defines Mahogany's niche. 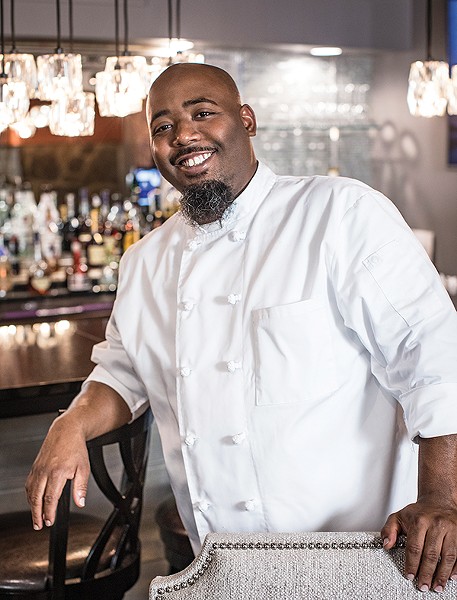 The restaurant is in Chickasaw Oaks Village in the old Just for Lunch and The Farmer space, near La Baguette. The ye olde country look has been ixnayed for something a bit more glamorous — modern grays, a dark bar, pretty green chairs for a touch of pizazz.

That touch extends to the menu, overseen by chef Christopher Hudson. The menu is divided into sections: the Extras (appetizers); the Props (soup and salads); the Wrangler (for kids); the Cast (entrees); the Stunts (sides); and the Finale (dessert).

The Cajun Chicken Egg Roll is among the extras, and it is extra. Hudson describes it as gumbo in an eggroll. The eggroll features okra and sausage. Another dish Hudson is proud of are the oxtails. He takes extra care with these, describing a two-day process that involves braising, then smoking. The Memphis Fried Chicken "feels like home," says Hudson. It has buttermilk, hot sauce, oregano, and thyme.

Also on the menu are the Lasagna Roll; a Grilled Black Angus Burger; meatloaf; catfish; and salmon croquettes.

Hudson says what sets his dishes apart from other upscale Southern places is his gift with spices. He likes to use berbere and Creole spices, to work in Caribbean and African flavors.

Let's move on the cocktail menu. Again, it's a run through Hollywood with drinks such as the Etta James aka At Last, the Tom Jones aka Pussy Cat, and the Pam Greer aka the Foxy Brown.

The Edison aka Black Maria is a luminescent black drink. Vodka is soaked in black rice, which changes the color but not the taste, then a little pearl dust is stirred in. The Idris Elba aka American Gangster is $100 (and worth every penny, I'm guessing). It's Remy Martin Louis XIII Cognac. The Bob Marley aka One Love is a multi-colored delight, which Miller promises will put you in a chill mood.

Mahogany is owned by Carlee M. McCullough, who is a lawyer. She recognized Hudson's talent and wanted to showcase it, according to Miller. Hudson's education was financially backed by Isaac Hayes. Hudson asked him if there was anything he could do for Hayes in return. Hayes' answer? "Do great." It's worth noting that Hayes reached the peak in film. He won the Oscar for "Best Song" for "Shaft" in 1972.

Sierra Nevada is brewing Resilience IPA as a fund-raiser for Camp Fire Relief efforts, with 100 percent of beer sales going to the cause. The brewery has invited their cohort to get involved and have helped with donations of malt, hops, and yeast. More than 1,000 breweries nationwide have answered the call. Locally, two breweries have signed up: Crosstown Brewing and Memphis Made. The beer should be ready in a couple weeks and will be available until it runs out.