Although the Shelby County Commission is relatively bipartisan in its functioning, certainly in comparison to other bodies elected by partisan contest (read: Congress, the Tennessee state legislature), the occasional issue can prompt ideological cleavages to surface.

As circumstances at Monday's regular public meeting demonstrated, there is a Republican hardcore — consisting of (in rough order of ideological purity) Amber Mills, David Bradford, Brandon Morrison, and Mick Wright. The commission's fifth Republican, chairman Mark Billingsley, is a de facto centrist, using his position to mediate between factions of all sorts, including those that are party-based.

The current deliberations on whether and by what means Shelby County government should buttress MATA (Memphis Area Transit Authority) provide a case in point. Support for county financing of MATA is strongest among the commission's city-dwelling Democrats and problematic to the extent that a commissioner's base is in the suburbs, where Republicans dominate. 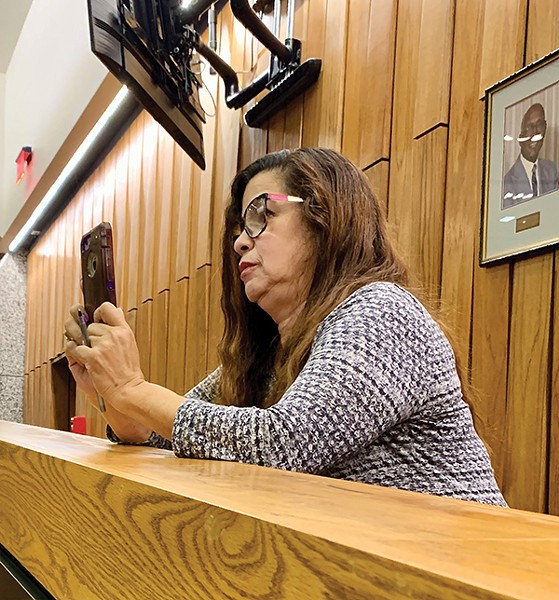 This is especially the case regarding the debate on the county wheel tax, the $50 annual fee assessed on automobile ownership that has been proposed as the basis, via a new surcharge, for financing the county's assistance to MATA. The wheel tax, created in 1957 to aid school construction, has always been controversial, especially as, over the years, it was tapped for purposes rather than education. But this latest proposal to add a $20 assessment earmarked for MATA, has really fired up opposition.

The initial test vote, the week before last, topped off at five commissioners in committee; nine votes would be needed to enact a fee increase, and that first preliminary vote of 5 to 4, with 2 abstentions, clearly indicated there would be very little progress toward approval without substantial modifications.

Further negotiation proved possible, however, as Sheriff Floyd Bonner added his voice to those of county Mayor Lee Harris and the various commissioners, and a hook was attached to the original proposal that gave it immediate relevance to the distrustful suburban commissioners. The recent de-annexation of several territories from the city of Memphis left those areas without claim to Memphis Police Department law enforcement. It was obvious that new sheriff's deputies would be needed in the de-annexed areas and just as obvious that new funding would be needed to pay for them.

Hence the reshaping of the proposed county MATA legislation, earmarking a percentage of the new wheel tax surcharge for the purpose of hiring new deputies. Some version of that concept, with or without specific bifurcation from the wheel tax proper, is currently under discussion both within the commission at large and under the auspices of a new Transportation Ad Hoc Committee created by chairman Billingsley and co-chaired by Commissioners Tami Sawyer and Mick Wright, pillars, respectively, of the Democratic and the Republican base.

Meanwhile, the wheel tax itself is under renewed attack. GOP Commissioner Morrison took the lead with a proposed resolution to subtract an annual $5 from the existing $50 wheel tax, to be offset by eliminating the commission's $2.6 million annual fund for community enhancement grants. Money to make these grants is distributed equally to each member of the commission and then to individuals and a variety of causes deemed worthy by the commissioners. The ability to assign such lagniappe is especially significant for the Democratic commissioners of the economically underserved inner city. They are correspondingly viewed with something approaching indifference in the Republican suburbs.

Morrison's proposal was a nonstarter in committee and, when brought to the floor of the regular meeting on Monday, begat a parade of vocal opponents from an audience jam-packed with spokespersons for the numerous programs, agencies, and causes that have benefited from, and in many cases have depended on, the enhancement grants.

So overwhelming was this response that Commissioner Wright posed the obvious response, an amendment, that passed without objection, to strike all reference to grants from the wheel tax reduction proposal.

As popular (and as inevitable) as that action was, it left the resolution without any visible or obvious means for offsetting the potential loss to the budget, which was recalculated on the spot to be $3.6 million annually.

Even so, the now-denatured measure was submitted to a vote, and four commissioners — all members of the aforementioned GOP hardcore of Mills, Bradford, Morris, and Wright — still voted for it, clearly as a symbolic gesture only.

What all this augurs is the likelihood of vigorous argument over the budget when that process begins some weeks from now, and several ad hoc skirmishes over expenditures between now and then.

• For several years, sentiment had been mounting among local voting-rights activists for new voting machines, and at length the Shelby County Election Commission, county Election Administrator Linda Phillips, and the Shelby County Commission all concurred in the necessity for such refurbishing, inasmuch as scarcely a single election has occurred in the last several decades without some mishap — and often a full-blown scandal — marring it.

The issue is, which kind of new machine. All principals acknowledge that the new machines, which Phillips has said she hopes to have on hand in time for this year's August round of voting, must have "paper trail" capacity, for purposes of accuracy. The main source of debate at the moment is whether the new machines should allow for "voter-marked" ballots, filled out by hand and subject to a verification process including scanning by machine, or rely instead on machine-marked ballots, the printed results of which can be checked before final casting.

Phillips has said she prefers the latter process, maintaining that there is an 8 to 12 percent chance of voter error with voter-marked paper ballots. Proponents of such ballots deny those statistics and counter that the process of machine-marking ballots allows for fraud by means of computer hacking.

Democratic Election Commissioner Bennie Smith makes the latter point and last week conducted a demonstration before the county commission of how just a hacking could occur.

While the commission must approve the final funding for the new machines, it is the Election Commission which will determine the type to be purchased. An RFP ("request for proposal") has been issued by the SCEC, and responses are expected on behalf of both types of voting machine. A group of pro-voter-marking activists turned up at last week's meeting of the Election Commission and were denied permission to speak, on grounds that the RFP process was incomplete, though Smith and Republican Election Commissioner Brent Taylor demurred from the prohibition.

A group of the activists, with Smith in tow, lobbied the county commission on behalf of a resolution backing the voter-marked machines on Monday. Sponsor Van Turner acknowledged that the ultimate decision lay with Phillips and the SCEC but noted, "We can withhold funding." Phillips countered: "And we can sue."

In the end, the county commission sent the matter back to committee for further discussion.