After a struggling start, The Visible School is celebrating 15 musical years — and expanding to other cities.

Having produced business icons like FedEx's Fred Smith and supermarket visionary Clarence Saunders, Memphis' entrepreneurial spirit is nearly as famous as the city's music. As Visible Music College grows its downtown campus by adding a $4 million student housing facility and expands its mission by opening new campuses in Texas and Illinois, it looks more and more like the school's founder, Christian rocker and former Skillet guitarist Ken Steorts, has figured out a unique alchemy for combining the two.

With his long hair, casual dress, and hot-pink sneakers, Steorts doesn't look like a typical college president. Then again, with its focus on modern popular genres ranging from rock and hip-hop to jazz and Americana, Memphis' Visible Music College isn't a typical accredited Christian music school. On Thursday, August 20th, Visible is inviting Memphis to a free, one-day music festival to celebrate the school's 15th anniversary. It's as good an excuse as any to review the history of what appears to be another Memphis success story. But the going wasn't always easy.

In the spring of 2000, Steorts found himself on his hands and knees. As a Christian musician wrestling with some big life decisions, it wasn't an unfamiliar position, exactly. Only this time, instead of praying for strength or guidance from above, the rock-loving guitar player from Bossier City, Louisiana, was scraping dead mice and rancid grease from the floors of an abandoned catfish restaurant in northeast Shelby County, wondering if he might have bitten off more than he could chew.

Steorts had written songs and toured the world with the popular Christian rock band Skillet, and over the years he'd learned a thing or two about how the popular music industry works. None of those things, however, had prepared him to start a music school from scratch.

"We had no resources at all," Steorts says, remembering just how absurd circumstances could be in Visible's earliest days, when it was called the Visible School of Music and Worship Arts. "In our first week, we only had one drum kit, so we used buckets for drums. It was completely ridiculous. It was also, probably, the most punk rock thing we ever did."

Visible has grown significantly since its unintentionally punk rock beginnings in Lakeland. Today, its main campus caters to 150 students and occupies an architecturally distinctive 40,000-square-foot building on Madison Avenue, across the street from AutoZone Park. In recent years, alumni have launched a sister college in Germany's Black Forest, and two additional Visible college campuses have opened in Lansing, Illinois, and Dallas, Texas. If things go according to Steorts' current five-year plan, the music school born in the dilapidated Lakeland Cafe will open 20 campuses in 20 cities.

Steorts was a leader in the Memphis music scene of the 1980s and '90s but not the scene you're used to reading about. Music histories of that period tend to focus on punk, garage rock, and Americana bands playing boozy gigs at clubs like the Antenna, Barristers, and the Hi-Tone Cafe.

But one thriving counterpart to the Midtown/downtown rock scene was Club 704B, an alcohol-free music venue in the basement of the Covenant Community Church on Highland. The church-based venue hosted weekend concerts by Christian rock bands like Tooth and Nail and P.O.D. That's the scene where Steorts made his home, leading Sunday worship services and playing with his punk band, Finger Paint, while he worked to finish his master's degree in music at the University of Memphis. 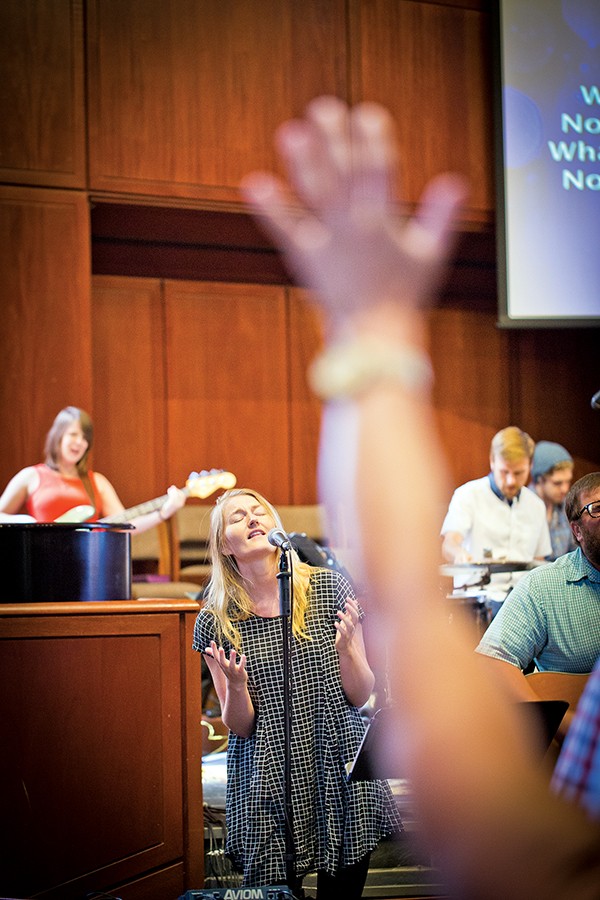 And that's how Steorts first met and started playing music with a group of younger musicians from sonically divergent but spiritually like-minded bands like Urgent Cry and Funky Dynamo. From that mix of prog, punk, and new wave sounds, the band Skillet was born. "We were a little prog-meets-punk and new wave," Steorts says, making fun of his former band's "terrible name" and describing in detail the pop and post-grunge sound he thought would make great church music. "We loved the Cars and Blondie and stuff like that too," he says.

Skillet played one show at 704B and was quickly signed to ForeFront Records, a prominent Nashville-based Christian label. The band would later ink a deal with Memphis' Ardent label. Steorts' vision for Visible Music College arrived shortly thereafter, while touring with the band. He saw a lot of young opening bands and notes, "They were either sweet Christian bands with pretty average music, or they were amazing bands that, I felt, weren't going to be in the church in a couple of years.

"I'd see the same kids in Germany that I saw in Georgia, and for different reasons, none of them were going to make it," Steorts says. "But in my experience, it was possible to love all styles of music and to make music that was intelligent and spiritually grounded. I kept thinking that maybe I could start some kind of one-year school that these bands could come to and learn."

Sensing he was meant to do something else, Steorts left Skillet in 2000 and immediately went out and started recruiting prospective students for his school from Christian music festivals across the country.

Steorts also started making lists. He wrote down everything that he thought a modern music college needed to succeed. "Faculty and staff are all going to be equal," he wrote. "There's no special class. We're a community of musicians doing a college, so why is the janitor different from the department chair? Why do students have to wait till the junior year to do all the really good stuff? If you're studying to be a musician, let's be in bands from the first day. The bands can be our classes. And we can buy and sell and license songs from each other. We can go through the stuff musicians see on the road that nobody ever talks about. You don't have to be a hardcore business type, but if you want to work in music for the rest of your life, you're going to have to know how things work because you don't just go out and 'get a job' in music."

Those lofty ideas about how things should work soon butted up against the harsh realities of payroll and accreditation. Many people didn't understand what it was he was trying to do. During the accreditation process, a visiting college president asked Steorts what he planned to do once the Christian music fad petered out.

"I corrected him," Steorts says. "I told him that pop music is always changing. Throughout its whole history, it's always changing. So, whatever's out there at any given time, stylistically, that's what we'll be teaching. If it's polka, we'll be teaching Christians polka." In 2008, after expanding its faculty and library resources, Visible started granting bachelor's degrees in music.

So why is it called the Visible School? Wouldn't a name like "The Audible School" be more appropriate for music education?

At the time of the school's founding, Steorts was reading The Cost of Discipleship by German theologian Dietrich Bonhoeffer. In a chapter titled "The Visible Community," Bonhoeffer made the case that churches and their good works need to be visible beyond the sanctuary walls. It's a concept the students take seriously. None more so than 2011 graduate Sawyer Schafbuch.

"One of the huge questions you ask at Visible is, 'What does community look like?'" Schafbuch says. "Then we ask what a healthy Christian community looks like. And, then, 'How do you create a community?'"

Inspired by his mentor, Steorts, Schafbuch founded and runs the Visible Community Music School, which is based out of Crosstown and has community partnerships in Orange Mound, Binghampton, Graham Heights, North Memphis, and downtown. 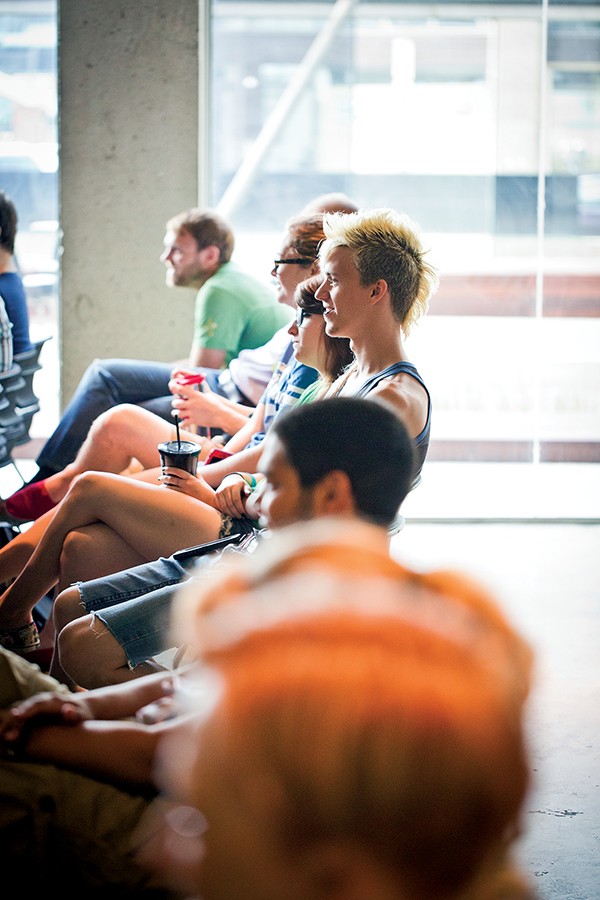 Like so many of the Visible Music College's students, Schafbuch isn't originally from Memphis, though he settled here after graduation and describes the city as his home. He grew up in Iowa, where he excelled in sports and had no idea that he was musically inclined, until an older friend taught him how to play guitar, which changed his life. After graduating from Visible, Schafbuch wanted to keep writing and recording music with the friends he'd made in Memphis, but more importantly, he wanted his musicianship to have some kind of mission or ministry. "And at that time, a lot of funding to do music in public schools was cut," he says.

Steorts says the community school began with a conversation about teaching some music lessons for less money than it costs, so "some kids can learn music." 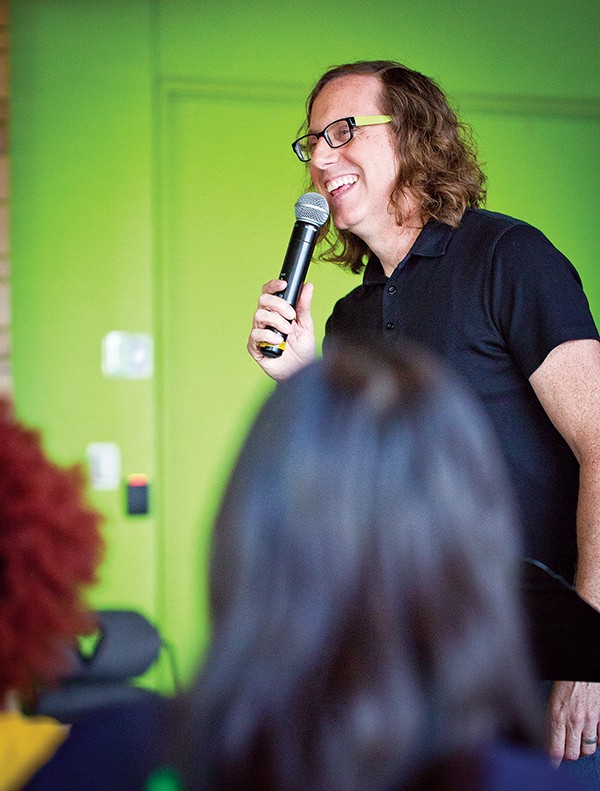 "And our students are learning how to teach in the process, which is the final act of learning," Steorts says. Schafbuch concurs, describing the community school as a way for Visible students to have "an outreach or ministry within the city of Memphis." He thinks it's a good way for the college to be visible and interface with ordinary Memphians and their families.

What is a modern music curriculum? According to Ashley Davis, chair of the Modern Music faculty and head of the school's keyboard division, it's about leveling the playing ground between popular and classical performance.

Before joining the Visible faculty, Davis spent five years as artistic director at the Stax Music Academy and a stint touring in Europe. "One thing was really an epiphany for me when I was touring," Davis says. "In Europe, the lines between what's considered sacred and what's considered secular aren't as defined as they are here. I could play a blues and then 'Amazing Grace' or 'God Looks Beyond My Faults,' and nobody flinched. Because they're all interconnected.

"At the college, we're preparing musicians and business and production people not just to work in the church but to engage in para-ministry, to go out into the world and let their gift shine," Davis says. Although Visible's program is built on a firmly religious foundation, he sees no conflict with a student's "assignment" taking him or her to Beale Street from time to time.

"I'm an ordained bishop," Davis says. "But I'm also a gigging musician. My keyboard's in the car, as we speak."

Steorts' announcement that he wanted to open 20 new Visible campuses in 20 cities by 2020 surprised some faculty members. Simon Alexander thinks his boss is a visionary, but the head of Visible's percussion division candidly admits there was a moment when he thought his boss might be losing his mind.

"We've just gotten into a comfy building," Alexander says about his drum kits and office furniture. "We're not in a catfish restaurant anymore," he adds. "We've got lovely air conditioning and lovely shiny desks and chairs. We have equipment and soundproof rooms and all these things we didn't have before. Everything is so good, and now you want to start a satellite in an old police station in Chicago? Are you crazy?"

They probably said the same thing to Fred Smith and Clarence Saunders.

Visible Music College's "Memphis Is Me" birthday party is being described as a celebration of contemporary Memphis music. The one-day mini-festival features more than a dozen acts on three stages, including performances by Amy LaVere, FreeWorld, Jason D. Williams, Ruby Wilson, and Star & Micey, in addition to several current and former Visible College students.