Maps To The Stars

Among a certain kind of cinephile, director David Cronenberg is a legend. He cut his teeth in the grindhouse 1970s, creating a string of low-budget horror films that revolved around truly disturbing themes: the melding of flesh and machine; the medical terror of your body betraying you; and the existential horror of being a ghost driving a skeleton covered in meat. Classic-era Cronenberg began with 1979's The Brood, a psychedelic horror show in which children turn murderously against each other and their parents. The 1980s for Cronenberg were particularly fruitful, with the head-exploding telepath horror Scanners; the sick TV parody Videodrome; the Stephen King adaptation The Dead Zone; and the definitive example of the body horror genre, his 1986 remake of The Fly. In the 1990s, he made a movie out of the unfilmable William S. Burroughs drug memoir Naked Lunch and the similarly challenging J. G. Ballard adaptation Crash. In the 21st century, he has collaborated with Viggo Mortensen for crime thrillers A History of Violence and Eastern Promises. And now, at age 71, he has turned his dark lens toward Hollywood with Maps to the Stars. 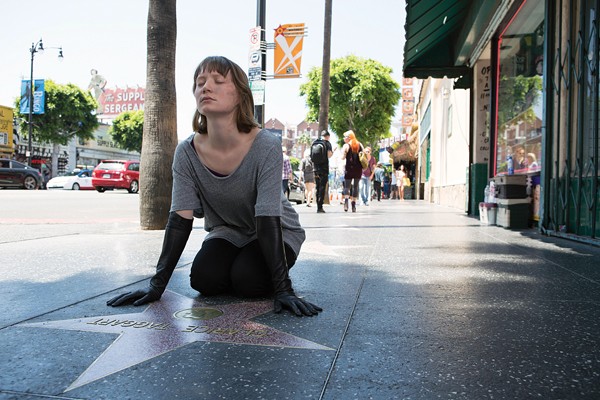 The film begins with Agatha (Mia Wasikowska), a mousy, slightly gothy, young woman arriving in Hollywood, as many young women do, on a bus. The first person she meets is Jerome (Robert Pattinson), a limo driver who takes her to a vacant lot in the Hollywood Hills where she says the home of child star Benjie Weiss (Evan Bird) burned down.

Agatha gives off some pretty creepy stalker vibes — especially when she claims to be internet friends with Carrie Fisher — but the real creepshow starts when we meet Benjie, an entitled Hollywood brat, who is contemptuously meeting with a dying young fan. Benjie's last film Bad Babysitter, he tells her, made $780 million worldwide, and his mother Christina (Olivia Williams), is negotiating his part in the sequel.

Meanwhile, Benjie's dad, Dr. Stafford Weiss (John Cusack), a celebrity masseuse/therapist/guru, is treating Havana Segrand (Julianne Moore), a wildly insecure actress who believes the only way to save her career is to get a part in a remake of a movie that her abusive late mother starred in. It turns out that Agatha did, in fact, know Carrie Fisher, and when Havana runs into the actress (who plays herself) outside a swanky shop on Rodeo Drive, Agatha gets a job as Havana's personal assistant.

Everyone in Maps to the Stars has a secret or two. In the case of the Weiss family, they have several, each more bizarre and shocking than the next. Agatha, a paranoid schizophrenic who carries visible scars on her face and arms from a fire she may have set when she was a kid, is the most sympathetic character in the film. Wasikowska plays her with mix of trembling vulnerability and wonder. Everyone else is a complete, self-absorbed creep. As you might expect from someone who just won the Oscar for Best Actress, Moore is the best of the bunch, nailing scenes where she shows barely disguised glee when a horrible accident befalls a professional rival. Cusack is also well-cast as the charlatan Dr. Phil figure.

The problem with Maps to the Stars is not in its stars, but in its script. Penned by screenwriter and novelist Bruce Wagner, it's morbid and muddled. As with all Cronenberg movies, there are striking moments, but taken as a whole, Maps to the Stars seems to have lost its way.