"Hi, y'all! My name's Marsha and I'm a big Tigers fan! Check out my blue dress! Anyhoo, I'm just wondering if y'all could do me a little ol' favor. Could you just cheer, 'Marsha! Marsha! Marsha!' while my, um, brother films it for Facebook? It'll be so fun and it won't take but a few seconds. Y'all are soooo cute." 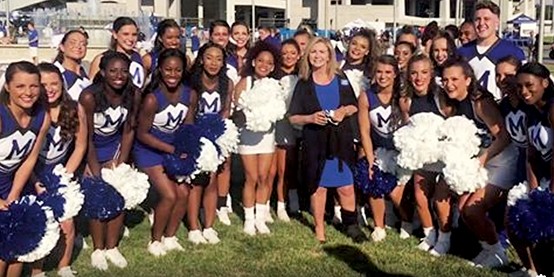 The above scenario is just my guess about what happened at the Liberty Bowl, Friday night, when senatorial candidate Marsha Blackburn showed up for the Memphis-Georgia State game and got the Memphis cheerleaders to "endorse" her. I could be wrong, of course.

State-connected schools are not allowed by law to endorse candidates. The cheerleaders obviously didn't know the law, and apparently neither did Blackburn, unless she chose to ignore it. She then tweeted the video and posted it on her Facebook page, adding, "Marsha Loves Memphis!"

That tactic quickly garnered Blackburn the wrath (and snark) of many Memphians, who prefer Senate candidates who don't dodge a Memphis debate, then show up for a football game and "borrow" our cheerleaders.

The university was not amused: "The Athletics Office was notified that pictures of the University of Memphis Spirit Squads were posted on political social media sites. U of M Spirit Squads do not endorse any candidate(s) for political office in accordance with U of M policies. Political organizers were contacted to remove any and all posts suggesting endorsement by the University of Memphis."

Presumably, the candidate learned that Memphis is not fond of faux fans who appropriate local culture.

Speaking of local culture ... Trader Joe's, opened a store in Germantown last week. The crowds were huge, lining up outside to get a chance to buy the store's signature line of groceries and beverages, including "Two Buck Chuck" wine, which now costs a little more than three bucks. Sadly, "Three Dollars and 47 Cents Chuck" just doesn't have the same ring to it, but who's counting?

The only real snafu was the fact that the store gave out souvenir cloth bags emblazoned with "Nashville! Music City." Ouch. More like "Traitor Joe's," amirite?

In an attempt to quiet the miffed social media masses, a poster on the Trader Joe's Germantown Facebook fan page offered this explanation: "Having a city bag is a legacy that TJ's bestows upon existing stores after they have been around for awhile. New stores do not get their own bags — basically they have to 'pay their dues' before getting a bag (my words, not TJ's). Nashville JUST got their custom bag after YEARS of having a TJ's. Our time will come if we show the store good service and loyalty!"

What else? Oh, Nike announced increased sales and new highs for its stock prices. The "boycott" by angry septagenarian white men apparently fizzled, when many of them mistakenly threw out their New Balance mall-walking shoes, which have a big "N" on the side. It's understandable. Initials can be confusing. For example, did you know that the "N" on the Nebraska football helmets stands for "Knowledge"? Didn't think so.

And speaking of Music City ... Rolling Stone reported that 85-year-year-old Loretta Lynn has released a new song called "Ruby's Stool." Which, it turns out, is about Ruby's barstool and not the first image that came to my mind, considering Loretta's age. Pro tip: Never use the word "stool" in a song title.

And finally, the digital Daily Memphian news-site launched on Monday with stories by, among others, former Commercial Appeal writers Marc Perrusquia, Geoff Calkins, Tom Bailey, and Jennifer Biggs. The site looked good, and I signed up for the $7-a-month subscription. The more reporting we get in Memphis, the better.