Needing nine votes from the Shelby County Commission to save his $20 wheel tax increase to provide for $10 million worth of county funding for MATA (Memphis Area Transit Authority), Shelby County Mayor Lee Harris decided on Monday that discretion was the better part of valor.

Aware that he was nowhere close to expanding on the five votes his proposal garnered in committee last Wednesday (nine votes are needed for passage), Harris pulled up stakes and agreed to defer the proposal for two weeks. He had already bowed to reality over the weekend when he confided at a Lakeland fundraiser in his honor that he hoped to get a yes vote within 30 days.

To get that result, Harris knows — as he conceded in a post-meeting conversation with reporters — that he will have to do some evangelizing with members of the county's suburbanite populations. The commission approved the deferral 8-4, but three Republican members from the outer county — David Bradford, Amber Mills, and Mick Wright — voted along with Democrat Edmund Ford Jr. against it, preferring an immediate vote on the record, one that, there was little doubt,  would have fallen short.

Yet another suburban Republican commissioner, Brandon Morrison, though voting for the deferral, indicated that she had an "original" idea for how to pay for the expansion of MATA through county auspices, and, though she didn't spell it out, it seemed obvious that upping the wheel tax was not what she had in mind.

In a statement before the deferral vote, Harris made a point of acknowledging that he had not consulted sufficiently about the project with suburban mayors, specifically with Mayor Mike Wissman of Arlington. Harris promised to make amends with Wissman and the other suburban mayors going forward. 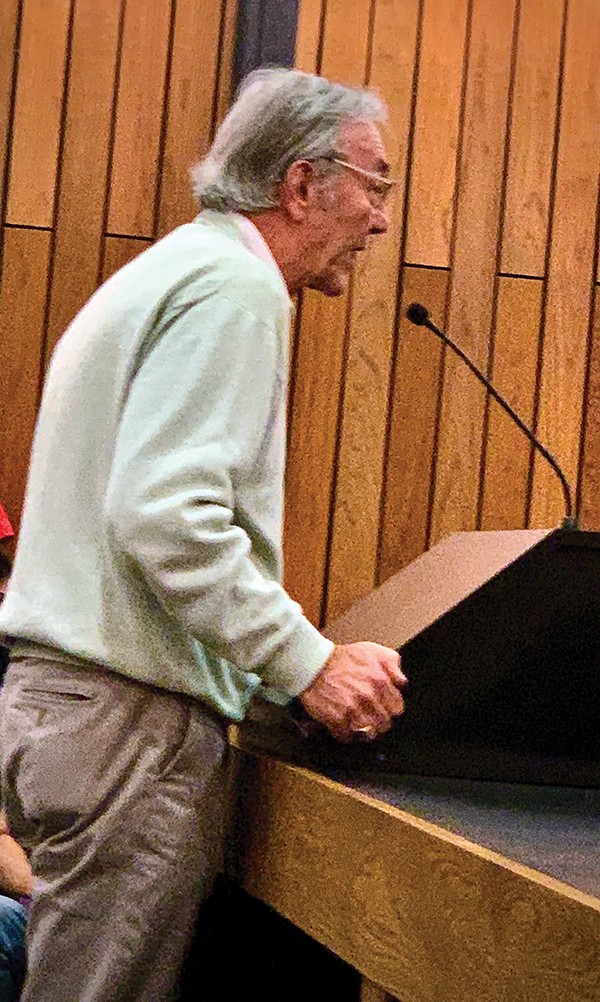 The stubborn arithmetic of suburban resistance on the commission was counterpointed on Monday by speaker after speaker from the audience making the case for a county commitment to MATA. Prominent among them was restaurateur John Vergos, a former city councilman who in recent years has been serving as chairman of the board of MATA.

"My interest in transportation goes back to when I served eight years on the city council and even before that, when we used to struggle cityside to come up with means," he said. "... I know that the fee would be considered aggressive in some regards, but it's also a fair amount, and it spreads across everybody in the county."

Vergos said that, as the owner of the Rendezvous restaurant, he could not count the number of times when, on a busy Saturday night, employees would come to him and say, "'I've got to leave while the buses are running.' What happens to those guys is that many times at the end of the day they're going to lose $30 or $40 in wages."

Vergos said he would "certainly applaud it" if the board of commissioners could come up with a solution, "as close as we are."

Commissioner Tami Sawyer said she was hopeful that a "stronger proposal" could emerge from further discussion, "but I do think that it's important that ... we don't keep kicking this ball down the road."

Commission chairman Mark Billingsley, who kept the discussion within reasonably cordial bounds, announced that, in view of Monday's turnout and continuing community interest in the matter, the forthcoming rehashing of the proposal next Wednesday, January 22nd, would be held in the Commission's first-floor auditorium.

• A weekend meet-and-greet in Memphis on behalf of the presidential campaign of Mike Bloomberg made obvious the all-purpose appeal of the former New York mayor as a focus of anti-Trump political sentiment and boasted at least two major endorsements of Bloomberg by local political figures.

Attendees filled to capacity the Midtown law office of Mike Working in Cooper-Young on Saturday. They heard 9th District Congressman Steve Cohen extol Bloomberg as a candidate willing to lend his efforts and his financial support to a campaign to defeat the re-election of President Donald Trump. While praising Bloomberg, Cohen said he was maintaining his option to support whatever presidential nominee the Democratic Party should ultimately produce.

On hand for the affair was Greg Fischer, mayor of Louisville, Kentucky, and the national chairman of Bloomberg's presidential campaign, who repeated to the crowd what had been assurances of support for Bloomberg's candidacy made the day before by Memphis Mayor Jim Strickland. Fischer said Strickland could not be present on Saturday because he was attending two funerals.

Another outright endorser was present, however, and willing to explain his reasons to the crowd. This was newly elected City Councilman Jeff Warren, a physician, who explained his reasoning this way: "It's really very simple. I've been listening to try to see who is going to come up with the best possible solution for the health care that we need in our country. And I walked across the parking lot from my office and heard Mayor Bloomberg announce his strategy for how to do that. It makes perfect sense. You know, in red states, where we haven't advanced the Affordable Care Act for our poorest people, he wants to federalize that, and that makes perfect sense to me. ... I endorse him wholeheartedly, and I really think his health-care plan is the best thing we can see in our country."

Fischer touted the spillover advantages his candidate's effort had for other Democrats: "He's running, but at the same time, he's running $100 million [in ads] a day in the battleground states to make the case against Trump — not for Mike Bloomberg, for whomever the Democratic nominee is going to be. He's got $20 million to work in those states to increase voter registration, not for Mike Bloomberg. And he said I'm going to keep all my offices open across this country, regardless if I'm the candidate or not, because we gotta beat Donald Trump."

In other words, Bloomberg's free-spending effort would boost the campaign of every other Democrat running for president, and, in particular, the party's nominee, whoever that might happen to be, right up to election day. It was an offer that was hard to refuse. 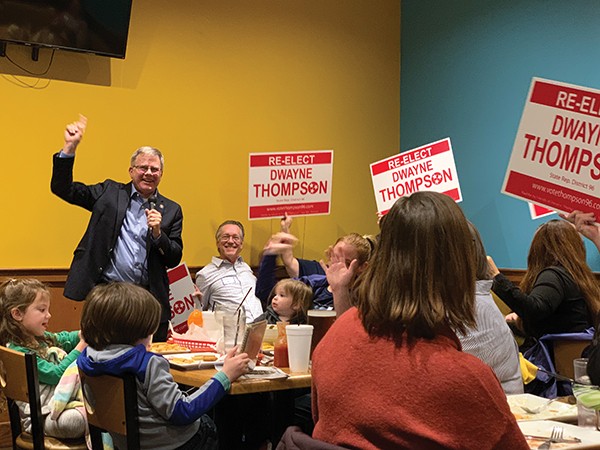