Me And Earl And The Dying Girl

I have to admit I'm conflicted about Me and Earl and the Dying Girl.

On the one hand, Alfonso Gomez-Rejon's debut as a feature director is genuinely fun. The film, which was based on a young adult novel by Jesse Andrews, who also wrote the film's script, pulled off a rare feat earlier this year when it won both the Grand Jury Prize and Audience Award at the Sundance Film Festival.

The "Me" in the title is Greg (Thomas Mann), a film-obsessed teenager. High school is hell, of course, and by his senior year, he's got his survival strategy well-figured out. He's mapped out, in detail, all of the cliques and social groups, and has painstakingly maintained identities in all of them. He's like high school Sweden: He has no enemies, but the cost of neutrality is a lack of friends. He won't even admit that his actual best friend Earl (RJ Cyler) is his friend at all: He calls him a "co-worker", because the hobby through which they have bonded is creating homemade parodies of classic movies. Their movies, which sport titles such as The Seven Seals, A Sockwork Orange, and Death In Tennis, bring to mind the "sweded" films of Michel Gondry's 2008 Be Kind Rewind. The occasional glimpse of Greg and Earl's work is just one of the fun formal tricks Gomez-Rejon plays. 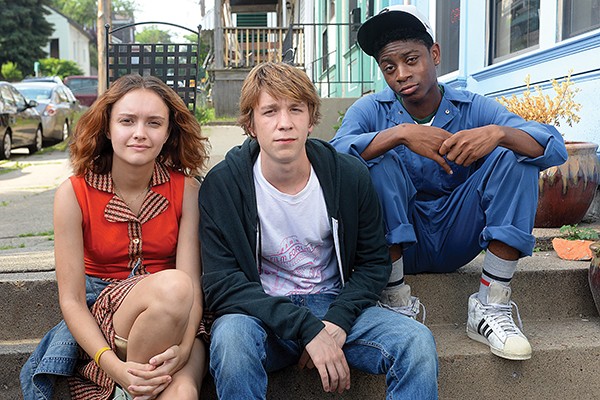 Greg's pretty content to drift through a life avoiding hassles; after all, who needs friends when you've got a killer Werner Herzog impression? But his ironic detachment hits an iceberg when his mother (Connie Britton) forces him out of his room to spend time with Rachel (Olivia Cooke), a girl in his senior class who has just been diagnosed with leukemia. Cheering up a dying girl is dangerously close to actual friendship, so Greg is reluctant, but Mom insists, and so he's soon navigating past Rachel's white wine-swilling mother Denise (Molly Shannon) to hang out with Rachel in her attic room.

This is only Gomez-Rejon's second feature, after last year's remake of The Town That Dreaded Sundown, but he's hardly a greenhorn. He's a veteran of TV's American Horror Story and Glee who has worked as a second unit director for movies such as Argo. He guides Mann through a fantastic lead performance. The supporting cast is full of great turns, such as Nick Offerman as Greg's Dad and Jon Bernthal as the tattooed history teacher Mr. McCarthy. Gomez-Rejon and Andrews adapt the novel's first person perspective into a voice-over narration. Little stop-motion animation bits give insight into Greg's state of mind as he and Earl set out to make a movie for Rachel, the filmmaking duo's sole fan.

But about three-quarters of the way through the movie, I had one of those moments when you realize that, even though Ferris Bueller is a funny guy you're supposed to root for, he's also kind of a sociopath. For most of its running time, Me and Earl and the Dying Girl is one of those movies where all of the other characters only exist to teach the protagonist a lesson. Earl is basically a Magical Negro character in the Bagger Vance mode. Rachel is only defined by her advancing illness. Viewing everyone around you only as a prop in your story is not only a bad way to go through life, but also bad writing.

Ultimately, I think the movie redeems itself. Its first-person perspective is in the first word of the title: "Me," and the "Me" in this case is a clueless 17-year-old boy. In the voice-over, Greg outs himself as an unreliable narrator, and little details throughout the movie show that the people around him know that he's being a jerk, even when he can't see it himself. Rachel is ultimately revealed to be a much deeper person than Greg could see, and it's Earl who finally delivers a much-needed gut punch to his friend. Gomez-Rejon and Andrews walk a thin line between deploying and subverting tired tropes, but their message is ultimately one of empathy, which makes Me and Earl and the Dying Girl worthwhile.