The brewery has collaborated with Old Dominick Distillery to make something special: bourbon barrel-aged beers.

"Alex Castle, head distiller of Old Dominick, is a friend of ours, and it just made sense," says Richie EsQuivel, co-owner of Meddlesome. "It's like, 'You've got bourbon barrels. Let's put beer in those.'"

EsQuivel and his team decided to try aging five different beers in the used bourbon barrels for nine months to a year. 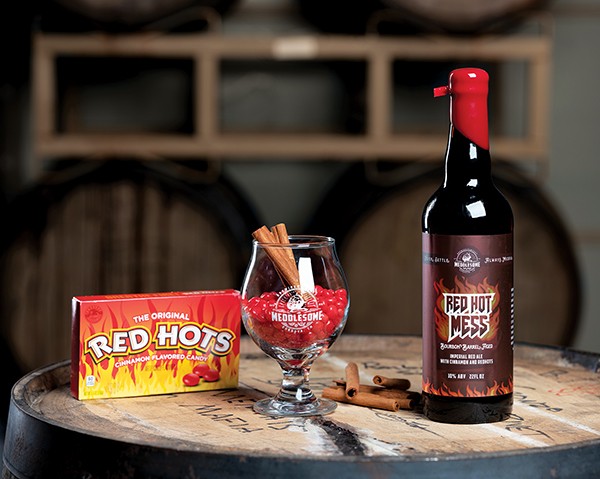 "When it gets cold or when it gets hot, the wood expands and contracts," says EsQuivel. "And when it has liquid in it, it draws the liquid in and then pushes the liquid back out. So, by aging a beer in the wood, a whole bunch of processes go down. Not only are you getting flavors from the wood character of the oak barrel, you're also getting flavors from the bourbon that was in it before."

Each Saturday in November, they're releasing them one at a time as the brewery's first series of packaged (and giftable) beers.

This week, they're releasing Red Hot Mess, inspired by Old Dominick's Memphis Toddy, made with cinnamon sticks and Red Hots candies. And at 10 percent ABV, each two-pack of beer is perfect for sharing.

"You can drink one by yourself, but you might be a red hot mess when you're done," EsQuivel jokes.