If the city's MEMFix program is a day spa for neighborhoods, the Edge District is next on the list for a massage.

The district, located inside a quarter-mile radius around the Marshall and Monroe intersection between downtown and Midtown, is scheduled to host the next MEMFix neighborhood revitalization festival on October 18th. Last Saturday, a "build day" was held  — one of many planned over the next few weeks — to clean up the area with the help of 20 volunteers. 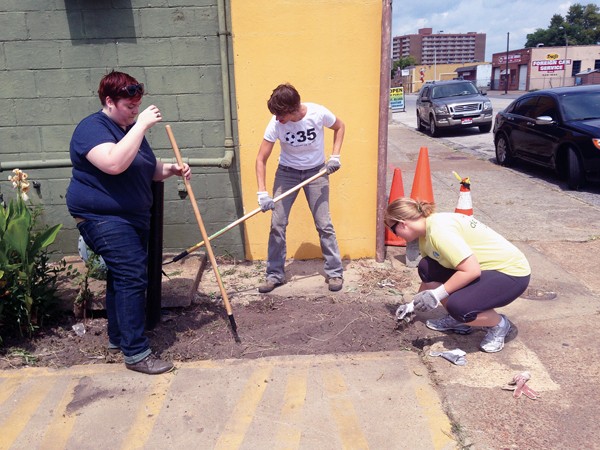 The MEMFix program launched in Crosstown in the fall of 2012 when the Mayor's Innovation Delivery Team held a one-day neighborhood festival with DIY bike lanes, pop-up retail shops, and public art to kick-start revitalization in the area. Since then, the mayor's team also launched an off-shoot program, MEMShop, offering short-term leases to pop-up businesses willing to set up in long-vacant storefronts in up-and-coming areas.

Subsequent MEMFix events have been held in Soulsville and on the Highland Strip near the University of Memphis.

MEMFix: Edge is a joint effort by Livable Memphis, the City of Memphis, and the Downtown Memphis Commission (DMC) to reimagine the district as they have done with other neighborhoods.

"It's the perfect storm of natural things bubbling up from new businesses moving in or existing businesses," said John Paul Shaffer, the new program director for Livable Memphis. "It's got a rich part in history. It's started to get a lot of attention from the DMC. It's the missing link between downtown and the Medical District that just looked to us as the perfect opportunity."

Shaffer previously worked on "New Face for an Old Broad" in 2010, an urban revitalization experiment predating the mayor's MEMFix program that focused on bringing attention to the Broad Avenue Arts District. The "New Face" event inspired the MEMFix series.

Livable Memphis applied for a $40,000 grant from the Environmental Protection Agency for the Edge's MEMFix event, and it's also working with DMC funding. In addition to putting on the Edge event, the organization is working on writing an instructional guide to running events like MEMFix.

Shaffer said the Edge District could use some street improvements, in particular, something tangible and permanent that could come out of the temporary event.

"Obviously, anything we can do there to make it a friendlier pedestrian environment is something we'd like to accomplish," Shaffer said. "We're hoping to do some [sidewalk] bump-outs and create some plaza-type spaces in the street. MEMFix itself is a more temporary event, but we want to leave behind some actual physical improvements."

Like the other MEMFix projects, Shaffer is optimistic about the Edge District and the effect the event will have on the neighborhood.