Club will host a series of curling classes for beginners.

Curling hooked the Memphis musician a decade ago and he's now looking to hook locals on the sport, too.

Americans typically only see curling during the Winter Olympics, during which they'll see a player slide a large, rounded stone down a long lane of bright, white ice. Then, two other players will sweep the ice in front of the stone, hoping to land it onto what looks like an archery target at the other end of the lane.

"I find that people have seen it on the Olympics, but they don't quite understand it," said Roberson. 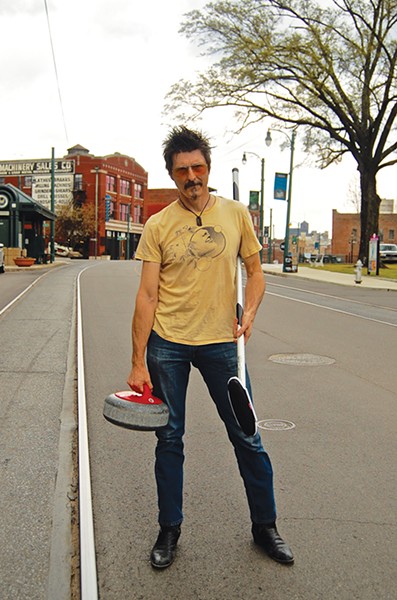 But he's hoping to change the minds of Mid-Southerners with a series of Learn to Curl events that get underway this weekend at the Mid-South Ice House in Olive Branch. The first two Saturday events (April 11th and 18th) have sold out. But slots are still available for Saturday, April 25th. The two-hour lessons cost $15 per person.

Roberson hopes the events (which have been hosted at the Ice House since 2012) will jump-start the curling scene in Memphis as feeders into the Memphis Curling Club. The club's spring league begins at the end of April and the summer league will run from July to August. Roberson hopes these leagues will snowball Memphis curling into an avalanche.

"The Atlanta club started with eight people four years ago and now it has more than 100 people in it," Roberson said.

Curling is certainly not mainstream in Memphis or the South, for that matter. But it got an acknowledgment here as a sport (or at least a healthy activity) from the Church Health Center (CHC). The clinic recently added curling to its list of approved activities for its employee wellness program. If employees go to a Learn to Curl event, they get points that could earn them an extra paid day off.

"Curling is an Olympic sport so it would definitely qualify for physical activity [in our program]," said Kimberly Barksdale Baker, a manager at the CHC's Wellness Center. "We know that curling increases your strength, flexibility, and your overall endurance."

Roberson is aware that curling has a ways to go in Memphis. But for anyone on the fence about getting started, he offered this advice:

"I'd tell them to spend $15, bring a clean pair of shoes [no leather soles] and maybe a windbreaker and come on out and learn to curl," Roberson said. "We'll spend two hours, give you some instruction, we'll play a short game, and you can actually get a chance to do it."