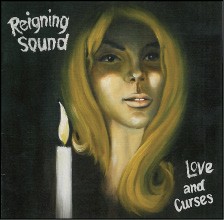 The first Reigning Sound studio album in five years isn't as sonically arresting as 2004's Too Much Guitar. It isn't as covered in record-shop pixie dust as 2002's Time Bomb High School. And it isn't as compellingly moody as 2001's folk-rockish Break Up, Break Down. In other words, it's the most mundane Reigning Sound album ever. Or it would be if one simple, gorgeous song after another is "mundane."

If Greg Cartwright had been fortunate enough to come of age in the late '50s or early '60s, he might have been the equal of Buddy Holly or Roy Orbison. As it is, he'll have to settle for being the most musically skilled, least affected, and most soulful purveyor of pre-Beatles-style rock-and-roll the world now knows — in other words, a cult artist. I think his new band lacks the snap of the Memphis version, but the singer and the songs are still exquisite.

Most of Love and Curses treads standard Cartwright territory: '50s/'60s pop/rock with nods to soul and Dylan/Byrds-style folk rock. And there are great new songs in this vein:

"Call Me," with its insolent delivery and surf/rockabilly riff; "The Bells," which wraps elegant wordplay in a tight little melodic package; and "Broken Things," a new Cartwright classic with Dylan organ, subtly revving garage-rock rhythm, and a slippery lyrical delivery that twists into bolder-than-usual territory ("And when humanity fails/They won't cut and run/Cause they can't even tell/When the damage is done").

But there are also a couple of unexpected detours. The stomping "Stick Up for Me" sounds like Cartwright's going topical: "Don't you think that the millions/Are getting tired of being governed by so few/They send you out to fight their war/While they stay home to control you." Except it's the album's only cover, of a garage-rock obscurity (original band: the Glass Sun), and it's actually more than 40 years old, which I suppose is part of the point.

The album-closing "Banker and a Liar" is an original and one that references gypsy music before launching into mid-'60s Dylan imagery and delivery ("And if their money don't fulfill you/There are medicines that will do/All the thinking for you so you can relax").

Cartwright has been in town over the past few months playing reunion gigs with his earlier Memphis bands the Oblivians and Compulsive Gamblers. It's been awhile since the Reigning Sound returned, but Cartwright & Co. will look to rectify that with a November 14th gig at the Hi-Tone Café. — Grade: A-

Though you can hear echoes of hand-me-down Big Star or the Beatles in the mix if you really try, local four-piece Rainy Day Manual is really a thoroughly modern band, their lack of grounding in any kind of roots, punk, or classic-rock tradition distinguishing them from most of the rock bands plying their trade in Midtown clubs.

The band's official debut, the five-song, 22-minute EP Vox a Copia, was recorded primarily at Ardent Studios and boasts a cleanness and density of sound designed for commercial radio. That's a difficult place for new rock bands to end up, but it wouldn't be surprising if Rainy Day Manual made it.

I like the guitars on this record most when they're bright (as on the opening to "Speak and Stand") rather than when they get heavy, and I like the music better generally when it winds up in a tight rhythm rather than when it spreads out into atmospherics. In these moments, with Chris Faulkner's powerful, versatile vocals up top, the band reminds me a little of Maroon 5, one of the better recent Top 40 guitar bands. — Grade: B