Steve Harvey isn't terrifying, says Cassie Smith Ellis. In fact, he's pretty easygoing. Ellis and four of her Tennessee relatives (two of whom — Natalie and Ryan Jeans — are from Memphis) recently competed on the long-running televised game show Family Feud. The episode airs on February 19th at 2 p.m. on WHBQ, and Ellis was barred from giving away too many details. Ellis did, however, tell the Flyer that despite the pressure of having to think on her feet, the show was a rewarding experience. And she said Harvey, the broad-grinning comedian and host of the show, offered an array of "teachable" moments. 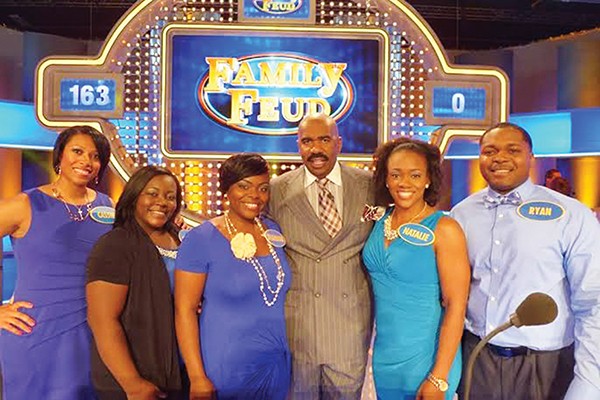 Flyer: How did the opportunity to be on the show come about?

Cassie Smith: [My cousin] heard there was an audition in Nashville. We were the first contestants of the day [at the audition]. Immediately after we got off of the stage from the mock Family Feud, they called us right back to meet the producers. They just wanted to know about our personalities and a little more about us.

How did you prepare for the auditions?

We watched a lot of Family Feud. We downloaded apps on our phones and played the games together. We just kept our minds wrapped around the whole concept of the show and thinking out of the box.

Did you guys talk about how you would use the prize money if you won?

We would all just split it up among the family and do what we need to do for our own families. If I were to win, depending on how much I win, I would probably pay off my house and put a little back for my son. He's 7 years old, and his name is Jordan William.

What was your favorite aspect of being on the show?

We got to be a part of the studio audience as well. There is a guy who comes on before Steve Harvey to get everyone warmed up. Throughout the whole show, even while we were in the audience before it started, there was always singing and dancing. We were clapping or we were yelling and chanting something. It was a lot of fun. But meeting Steve Harvey was what topped it off.

Do you have a memorable experience from meeting Steve Harvey?

He's very easygoing actually. He's comedic and liked to joke with the audience a lot. It was like he was part of the family. He would give advice to the audience as a whole. He would have a teachable moment where he would tell about his life and things he had gone through.

What was the most challenging aspect of the show?

Thinking on your feet — if you have so many answers on the board and your family has gone through them, if you're here, and all of your answers have been called out. It's hard to think on the spot to get something a little different from what [was already] said.

Are there any other game shows you'd like to be on now that you've got Family Feud on your resume?

I've always wanted to be on Whammy. I've watched it since I was little.