With the race tightening, none of the candidates are above simple grunt work.

There will be two more joint appearances by mayoral candidates this week. And, as if any more proof were needed that the mayoral race is a tight, tense affair, there was incumbent Mayor A C Wharton out there on Saturday, with the temperature in the 90s, going door to door and asking Whitehaven residents for permission to put his signs in their yards.

This was two weeks after the mayor's opening of a Whitehaven headquarters on Elvis Presley Boulevard (followed a week later by his opening of a Poplar Avenue HQ).

To hear the mayor say it, Whitehaven has always been a proving ground for him in his various elections, especially when, as in 2011, when one of his opponents was a Ford — in that case, former City Councilman Edmund Ford Sr., a member of the prominent South Memphis-based political family. 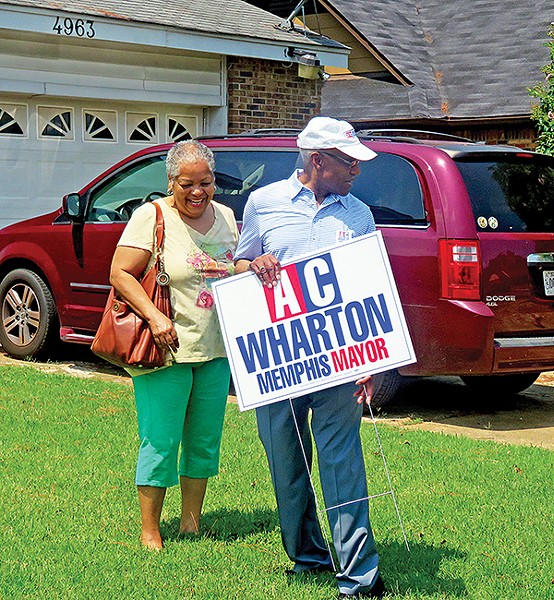 "They've always said I'd have trouble with Whitehaven, but I always do okay," said Wharton, as he trundled up Whitworth Road, waiting to rendezvous with an aide in a car, headed his way with more signs. "All you gotta do is look around here and see how many signs we've already put up."

Whitehaven has the potential to be a problem area for Wharton this year, inasmuch as one of his opponents, City Councilman Harold Collins, represents the area on the council. That morning, even as Wharton was doing his door-to-door in Whitehaven, Collins was having a formal headquarters opening at Southbrook Mall, mere blocks away on Shelby Drive at Elvis Presley.

The mayor did not minimize the Collins threat, but, as he said, "Only a Ford is a Ford," meaning, presumably, that in his view the councilman lacked the well-known political clan's lingering mystique in the area.

And, as it happens, only days before, Edmund Ford Sr., Wharton's former opponent, had released to the media a scathing letter accusing Collins of running a diversionary campaign designed not to win but to siphon African-American votes away from Wharton to help the mayoral candidacy of Councilman Jim Strickland.

And, meanwhile, Edmund Ford Jr., who succeeded his father on the city council and represents a part of Whitehaven adjoining Collins' bailiwick, is one of the mayor's major backers, speaking on his behalf at various rallies. That sort of help will surely prove useful to the mayor's reelection campaign.

Although nobody, as of yet, is releasing poll results, those you hear about are said to confirm the fact that Wharton is indeed involved in a competitive race — with Strickland the major threat — and has to meet various percentage figures among both black and white voters in order to prevail.

Wharton and Strickland have enormous campaign treasuries and are in a position to spend anywhere from $200,000 to $300,000 on their campaigns between now and October 8th — much of that on print, radio, and TV advertising. Collins and a fourth candidate regarded as serious, Memphis Police Association director Mike Williams, don't have resources on that scale, but both got positive exposure on last Monday night's debate on WMC-TV and stand to claim an ever greater share of public attention, with several more mayoral forums yet to come. 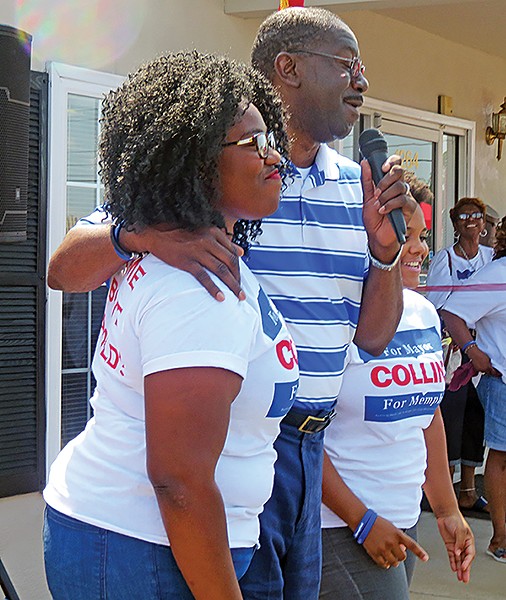 Collins' headquarters opening on Saturday took place in a former bank building in the parking lot of Southbrook, the down-at-the-heels shopping mall which has been the subject of an on-again/off-again renovation project that was shelved back in June by the mayor. Days later, Wharton proposed a commission to look into a more ambitious $50 to $70 million renovation of the entire area, though there were cynics who saw that move as purely hypothetical and designed only for its short-term P.R. value.

The mayor has been nothing if not candid about what he sees as the priorities of the city's voters. Some weeks ago, speaking to women supporters at Waterford Plaza, he expressed regret at the benefit cuts imposed on city employees this year but said polling showed that voters overall were not exercised over the matter, whereas they expressed a great deal of anxiety about the city getting its financial house in order. Recalling the matter on Saturday, Wharton mused, "'Getting our financial house in order' got a 9.4 rating on a scale of 10."

Both Southbrook and the benefits cuts are integral matters to Collins' platform and got due mention on Saturday — the former with the councilman's promise to come to the rescue of local entrepreneurs; the latter, when local Firefighters Union president Tommy Malone told the crowd that fire employees had "lost everything that we've gained for 30 years" during the Wharton administration.

By contrast, Collins had been the "only candidate who has consistently supported the firefighters," Malone said. "We've got to work this man into office. Or we'll get four more years of the same thing, and we can't stand that in this city."

Collins had been preceded to the mic by his two daughters, who told the crowd how they had been reluctant to return to Memphis after college elsewhere because of limited, low-pay job opportunities back home. The councilman elaborated on that, one of his basic themes, saying that Memphis' young people "see no future in ... pull-it, pick-it, and push-it jobs" at $9 or $10 an hour. He promised, as mayor, to bring in well-paying finance, engineering, and technology jobs.

Recalling last year's youth mob attack on shoppers at the Poplar Plaza Kroger, Collins cited the specter of urban "terrorism" and said he would "work with the Juvenile Court system to deal with violence, making sure the perpetrators were detained and subjected to a judicial hearing within 24 hours. We will determine whether somebody is the head of some gang or if the valedictorian is at the wrong place at the wrong time," Collins said.

After pledging, "We won't have all these CEOs and COOs in our administration," an obvious dig at the incumbent mayor, Collins ran a few stirring phrases up the flagpole and, in an oblique reference to the Edmund Ford Sr. letter, declared, "We're in this race to win it. Nor in this race to do anything else, but win. But win. But win!"

While all this was going on, Strickland, like the Mayor, was going door to door, something he does on weekends with fair frequency. The simple yard signs saying "Strickland" are beginning to appear in quantity along such high-visibility thoroughfares as Poplar and Walnut Grove, as are those for Wharton. Collins, too, has a fair number of signs out.

With both Wharton and Strickland about to turn loose gobs of money (their first TV ads have already appeared) and Collins stepping up his fund-raising efforts, the campaign of Williams remains a true variable. He doesn't yet have anything like the public presence of the others, but last week's agile debate performance, which seemed to disprove that he's a one-trick pony, has people watching.

Williams spent most of Saturday at the Agricenter attending a "Pet Expo." He materialized late in the day at a location off White Station Road, where the Police Association was collecting donations for the family of slain MPD officer Sean Bolton.

Williams and the others were scheduled for a debate at the University of Memphis' Rose Theater at 6:30 p.m. on Wednesday and at Central High School for an Evergreen Historic Association forum on Thursday at 6 p.m. We'll be watching.