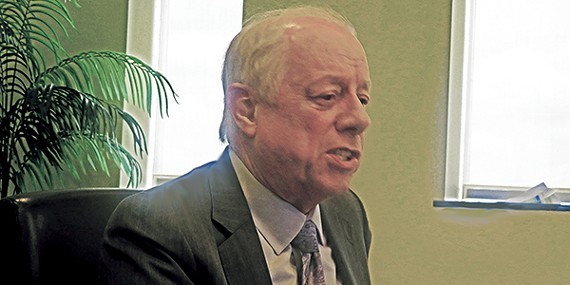 This week was destined to see large and distinct choices, forks in the road for the politically minded.

Be this a blue-wave year or not, the Shelby County Republican Party still has to be considered the county's dominant political unit, on the strength of its success in the last several election results. And what is arguably the lynchpin organization of the SCRP, the East Shelby Republican Club, scheduled its annual Reagan Day Master Meal for Thursday night at the Great Hall of Germantown, with state treasurer David Lillard as the featured speaker.

The occasion is one of two during the year (the other being the GOP's February Lincoln Day Dinner) that generally brings out the Republican brass, who will sing such praises as they can for the Trump administration.

• Former Governor Phil Bredesen, a conservative at heart, might be considered an unlikely avatar of the aforementioned Democratic blue wave, but that he is, as the party's standard-bearer for the U.S. Senate seat being vacated by the GOP's Bob Corker. Bredesen was in town for a Monday night fund-raiser, which followed up on an earlier meeting Monday with representatives of the Memphis Bioworks Foundation about the effect of Trump's tariffs on entrepreneurial initiatives being midwifed into being by the foundation.

"Too early to tell," was Bredesen's finding about the fledgling medical enterprises under discussion, though he told reporters afterward that the president's tariff policy would give a hard hit to the state's agriculture and possibly its automobile industry — as well as to Tennessee whiskey, which Bredesen described as one of the state's major exports and one wide open to other countries' retaliations.

As Bredesen said, "You can't hurt Elvis, and you can't hurt Dolly, but you can definitely hurt Jack Daniels." Bredesen had harsh words for the president's hard-line policy on immigration. "Child abuse," he called it.

That may end up being the mildest epithet bestowed this week on President Trump's "zero tolerance" border policy toward immigrants seeking asylum. A massive demonstration protesting that policy and its results, notably the separation of parents from their children and the scattering of both to various detention camps in the country, took place Sunday at Lindenwood Christian Church, under the auspices of MICAH (Memphis Interfaith Coalition for Action and Hope).

Yet another demonstration took place Monday evening at Shady Grove Presbyterian Church under the auspices of the activist group Indivisible Memphis and the non-profit Showing Up for Racial Justice. Both assemblies numbered in the several hundreds and, at both, plans were launched for aiding the afflicted asylum-seekers and countering the border policy.

Yet a third such gathering, a "Families Belong Together Memphis Action Rally," hosted by Latino Memphis and Tennessee Immigrant and Refugee Rights Coalition [TIRRC], will convene on Saturday, June 30th, at 10 a.m. at Gaisman Park.

Political candidates, mainly Democrats, were observed at the first two rallies, and doubtless will be at the third, but ordinary citizens, expressing extremes of both outrage and compassion, are the main players in this drama, a continuing one that could well transform the ongoing course of the year and trump politics as usual.

And yes, that pun was very much intentional.