MEM’s the Word: A Defense of the City’s Airport

Please buckle your seat belts, put away all large electronic devices, and return your seat backs to the upright position as I deliver what might be deemed a highly controversial opinion. Having landed at 14 different airports this year, I can say with confidence that I actually kinda like Memphis International Airport.

Note that I said "I like it" and not "I think it's good." Because all airports are terrible by nature; each differs only in its individual brand of terribleness. MEM's is about 65 percent cosmetic, and they're working on it. I know this because a massive sign advertises that fact just past the TSA screening area. It's easy to miss if you're busy congratulating yourself for forking over $85 and your fingerprints for the privilege of keeping your shoes and belt on. "Best decision I ever made," I mutter as I watch some barefoot chump fumble to extract his carefully-packed laptop from his roller bag. That poor sucker is going to spend 10 whole minutes in security. He couldn't cut it at a place like DFW, where the line sometimes snakes out the door like the world's most stressful nightclub. And if you're unlucky enough to fly out after peak hours, it doesn't matter if you have TSA PreCheck or not. Hope you're at the right terminal. 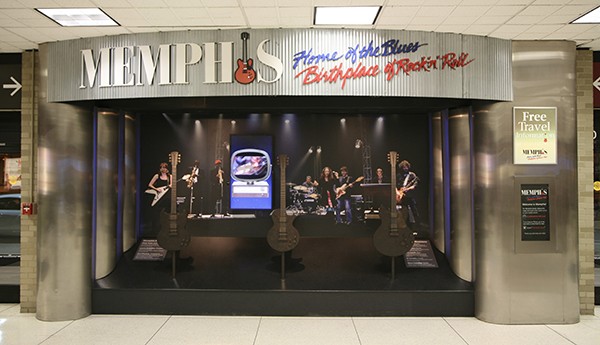 Our airport feels small and quaint and, frankly, barely deserving of the word "International" in its name, but I'm not sure that's the worst thing ever. Gate C22 may seem like a haul, but at least you don't have to navigate a series of escalators and some internal tram network to get to it. Heaven forbid, the "AirLink" or "SkyConnect" or whatever name marketing chose in hopes of making the experience feel a little less like the inside of a bank drive-through canister is out of service and you have to squeeze your body and your baggage into an overstuffed shuttle bus. You'll be longing for the simplicity of MEM, where a moving sidewalk is the most sophisticated form of transport we need. When it's out of service, the floor's still right there.

I am aware that if not for lack of busy-ness and its perceived smallness, I wouldn't have so many airports to compare to MEM — because I'd be on way more direct flights. But until very recently, MEM was no smaller than it was in the 1990s — back when Northwest Airlines had the place humming all the time. Twice this summer I had to park on the top level of the economy garage and thought, "Hell yeah, girl. The airport is back, baby." If you're there at the right time on a Monday morning, it's legitimately busy. But there's a middle ground between our relatively chill experience and the bedlam one encounters at Newark, where panhandlers (Like, how? Did they buy a ticket?) roam the food courts.

I would give just about anything for a nonstop flight to New Orleans, and yes, I know the drive is easy but that's four hours I'd rather spend eating. And how about direct flights to Boston and Seattle? A transatlantic flight would be cool, too. The traffic could quadruple and I'm not sure passengers would even notice. Maybe travelers would have to start arriving 30 minutes before their flights instead of 15. The airport's biggest problem is that it looks like a 1970s airport movie set — honestly, who cares, as long as the WiFi works? Natural light and quiet places to work are cool, but who's trying to hang out at the airport long enough for those features to matter? You will never complain about the walk to the garage after you've taken a shuttle to the cab stand at LaGuardia, where you'll next wait in a line of a thousand cabs for what feels like an eternity before you even begin your journey into the city.

Memphis is one of the few places in the country, possibly even the world, where you can practically just roll up to the front door and catch a flight. More airports should be trying to be like ours, not the other way around.

Jen Clarke is a digital marketing specialist and an unapologetic Memphian.

The Rant MEM Memphis International Airport air travel in the US