Don Cheadle proves his virtuosity as the director and star of Miles Ahead.

Don Cheadle's performance in 2004's Hotel Rwanda is one of my all-time favorites — and by "favorite," I mean "he reduced me to a shivering mess stewing in a puddle of my own tears."

Cheadle's been working regularly the last few years as War Machine in the Marvel Universe — you'll see him taking sides in Captain America: Civil War this summer. He does a fine job, but let's face it, an actor of his skill is meant for better things than the Marvel C-list. Now, 12 years after Hotel Rwanda, he has another iconic performance in a role he created for himself.

Miles Davis, the architect of bebop, towers large in the history of 20th century music. His cultural influence is so deep, it's sometimes hard to perceive. After all, his 1949 album Birth of the Cool is one of the reasons we still use "cool" as a positive adjective. He has never had a biopic, because his mercurial personality and extreme appetites made him a hard figure to get a handle on. How can you sum up such a huge personality in a two-hour movie?

Cheadle's been trying for a decade to bring Davis' story to the screen, ambitiously, not only taking on the role of the legendary musician, but also making his directorial debut at the same time. The struggle and time invested has paid off big time with Miles Ahead.

Wisely, the film does not try to outline Davis' entire, eventful life, nor does it, like Walk the Line, focus on the artist's most productive creative period. Instead, we meet Davis around 1980 in the middle of one of his famously contentious interviews. The intro, while visually interesting, is my only real quibble with the film. The rest of the movie flashes back and forth between an eventful couple of days in 1978 when Davis ran around New York with Rolling Stone journalist Dave Brill (Ewan McGregor), and the decade-long story of Davis' relationship with his one true love, his first wife Frances Davis (Emayatzy Corinealdi). These parallel story lines create a perfect couplet of cause and effect, deftly drawing us inside Davis' point of view. Late '70s Davis is a self-pitying, cokehead burnout who hasn't recorded music in years. '50s Davis is a self-possessed man of fierce talent and laser focus whose self-destructive tendencies are baked into his creative personality. But the intro and outro framing disrupts that symmetry and threatens to derail the blue train before it leaves the station. 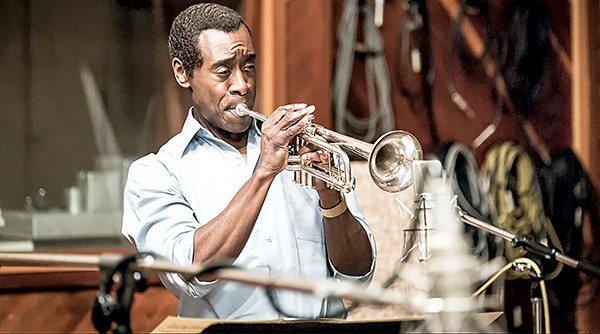 Once over that minor bump, the film opens up into a rich, deep portrait of a genius worn down by time and trouble. Cheadle doesn't shy away from the central contradictions of the man. After he is beaten by racist cops on the street outside the Harlem nightclub where he's headlining, he immediately turns around and demands that Frances give up her promising career as a dancer because she is a woman and it offends his sense of proper gender roles for a wife to work outside the home. This is devastating to Frances and has the effect of poisoning their marriage from there on out, but Davis is as blind to his own sexism as the white cop is to his racism.

Cheadle is an empathetic director of actors, drawing out Corinealdi's love for Miles and the pain it causes her. At the same time, he and McGregor are in some kind of demented buddy cop movie as they float from a coke dealer's dorm room at NYU to a back alley shootout with record label heavies. Cheadle's heretofore unseen directorial skills extend into the visual and conceptual, as he proves in a hallucinogenic climax at a boxing match that recalls Scorsese's fight scenes in Raging Bull. But the most important element is Cheadle's titanic acting performance as Davis, which transcends mere imitation to give us a glance of a tortured genius' inner life. When next we see Cheadle, he'll be spouting a couple of cheeky lines as part of a too-large ensemble cast of costumed crusaders. With Miles Ahead under his belt, he can cash that paycheck knowing he's got nothing left to prove.