Despicable Me gets a phoned-in cash grab prequel

Let's start with what Minions gets right: It's a mercifully short 93 minutes long.

But even at that length (which, in my book is about right for a comedy), it still feels padded. The story, such as it is, is patched together out of a disconnected batch of ideas via rote formula straight out of the screenwriting manual Save The Cat!. If you've noticed some startling similarities in Hollywood product in the last few years, it's because the cult of Blake Snyder's book, which boasts the subtitle The Last Book On Screenwriting You'll Ever Need, has become ubiquitous among studio producers. When the victory celebrations of Minions Kevin, Bob, and Stuart (all identically voiced by Despicable Me co-director Pierre-Louis Padang Coffin) are interrupted by a sudden and inexplicable re-emergence of vanquished villain Scarlet Overkill (Sandra Bullock), I groaned audibly in the theater. The "false ending" beat is right out of Save The Cat!, and it's become one of my biggest pet peeves.

I'm not really spoiling anything by telling you about the ending, because Minions is a prequel to Despicable Me, the sleeper hit of 2010 that starred Steve Carell as a sympathetic supervillain named Gru who is assisted in his plot to steal the moon by a pack of strange, Simpsons-yellow blobs with goggles and overalls. The success of the Minions as a pop-culture icon is a tribute to the power of neoteny, the display of traits associated with babies. With their big, goggled eyes, bulbous heads that double as bodies, and pre-vocal gibberish vocabulary, the Minions are essentially abstracted toddlers. Aiming the character design straight at the audience's mammalian brain has paid off big time for the studio in the form of stuffed doll sales. The one-joke supporting characters got their own vehicle. 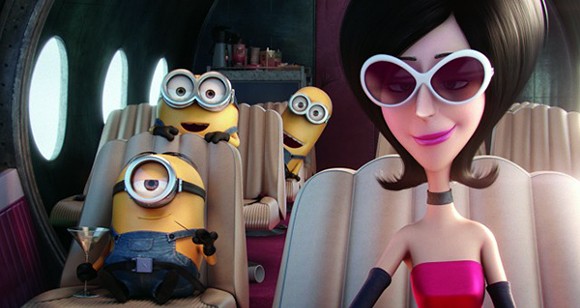 The joke pays off best during Minions' opening sequence, where the little yellow fellers are given a backstory that reaches back into geologic time. Apparently indestructible and immortal, the Minions served T. Rexes, Neanderthals, and Dracula before being forced into hiding in an arctic cave because they got on Napoleon's bad side during the retreat from Moscow. When three of them finally emerge in 1968 to look for a new villain to serve, they end up at a supervillian's convention that looks like a rejected sequence from The Incredibles.

The charms of the Despicable Me franchise lie in its subversion of comic book superhero tropes, but nearly everything it does was done better in the 1990s by Ben Edlund's The Tick. Minions also borrows heavily from The Venture Bros., and if I were the showrunners, I would sue for the blatant lifting of the character design of Scarlet Overkill from Dr. Girlfriend. But in place of brainy jokes about failed heroes and villains that makes The Venture Bros. consistently one of the best shows on television, Minions offers half-assed Three Stooges re-treads, phoned-in performances, and unimaginative animation.

There are two numbers that sum up Minions: The production budget was $75 million, less than half of what Inside Out cost. But, as an unnamed insider leaked to Ad Age, the promotion budget was a whopping $593 million. If you think you've been seeing a lot of Minions lately, that's why. The advertising medium is the message. The film is just an afterthought.