"Master of the house isn't worth my spit. Comforter, philosopher, and life-long shit. Cunning little brain; regular Voltaire. Thinks he's quite a lover, but there's not much there." — Madame Thénardier, Les Misérables

Madame Thénardier is one of the all-time great musical theater characters. She's vile, but in a show as relentlessly bleak as Les Misérables, she provides much-needed comic relief. "It's dark," says Allison Guinn, who's been touring in the pivotal role for more than a year and describes the opportunity as a lifelong wish fulfilled. 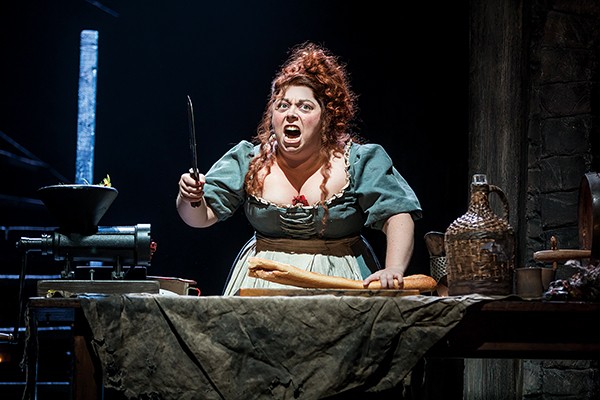 "I've wanted to play this role since I was a child," says Guinn, who grew up in East Tennessee and describes her first encounter with this epic musical of revolution and social injustice as a life-altering event. "We lived near Johnson City. There wasn't a lot of opportunity to see live theater, so my mother took me to see Les Miz in Knoxville when I was a pre-teen," she says. "She thought I'd connect with little Cosette, the 'Castle on a Cloud' girl, because I was about the same age. But I was instantly attracted to Madame Thénardier. I wanted to be the one who makes people laugh."

Guinn grew up in a literate and musical family. Her mother was a public school teacher who read Hugo's novel aloud. Her grandmother was Daisy Dean Sherrill who played mandolin and sang in The Ladies Homeland Gospel Quartet. "Carter family songs were some of her favorites, and she taught them to me," says Guinn, who learned to accompany herself on autoharp.

Victor Hugo never developed a knack for making music. He got super excited when he learned to peck out Beethoven with one finger. But the poet had other skills, and his moody, nearly expressionist drawings served as the principle inspiration for Les Misérables' 25th anniversary remount.

"It's gorgeous," Guinn says. "And what really moved me is that the designer didn't just take the time to pay homage to the art, he animated it."