MLK’s Challenges Are Still Before Us

Close to 30 congressmen visited Memphis last week as a part of a yearly civil rights pilgrimage.

Led by Representative John Lewis of Georgia, the group usually stops in Alabama to commemorate "Bloody Sunday," a day in 1965 when peaceful protesters were beaten by police during a march from Selma to Montgomery.

This year, in light of it being the 50th anniversary of Dr. Martin Luther King's assassination, the legislators made a special stop here at the Mason Temple, where King gave his final speech, and then at the Lorraine Motel at the National Civil Rights Museum, where King was shot and killed a day later.

Both of the local spots are being added to the U.S. Civil Rights Network, a collection of places deemed significant to the narrative of the civil rights movement.

The network was recently established under President Donald Trump to demonstrate a "commitment to continue telling these stories for generations to come." But, as we look back and tell these stories, we must ask ourselves if we are being retrospective for the sake of being retrospective, or are we looking back with the intent of progressing forward? 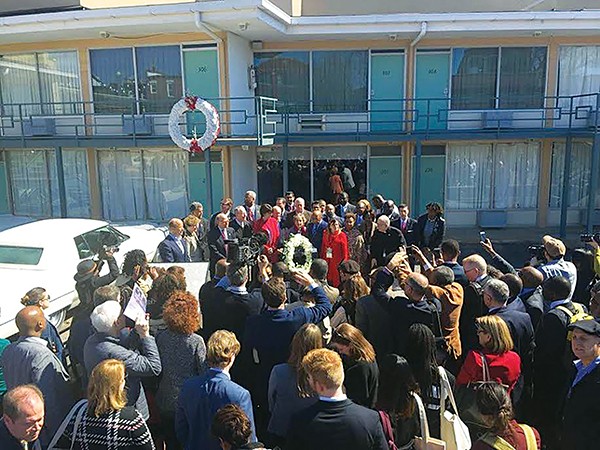 Will these same legislators take the actions necessary to keep progress alive?

Dr. King knew taking on the battles of the future was more crucial than dwelling on those of past. His message was always forward focused.

In his final book Where Do We Go From Here?, he presented an analysis of the country's race relations in the wake of the Civil Rights and Voting Acts passing. He talked about what it would take to guarantee that the rights won under these acts would be enforced by the government. He foresaw the social and economic struggles that would arise post-civil rights movement, but I wonder if he thought most of those obstacles would still stand tall today.

Attaining better jobs, higher wages, decent housing, and equal education are all the challenges King talked about in his book and the ones that still ring familiar to so many in 2018.

King's life ended right as he was turning his attention from fighting for civil rights to economic rights with the "Poor People's Campaign." His next fight was going to be against poverty. That was 50 years ago, and we're still fighting economic disparities today.

This became even more evident when the findings of a poverty report done by University of Memphis professor Dr. Elena Delavega in collaboration with the National Civil Rights Museum was presented last week.

The Poverty Report: Memphis Since MLK takes a look at poverty rates and other economic indicators since 1968, comparing African Americans and whites living in the county. Though it shows African Americans have seen growth economically, educationally, and vocationally, the 27-page report is full of startling statistics about the current poverty rates in Shelby County.

Here are a few of the most disturbing findings:

• The poverty rate for African-American children in the city is 48.3 percent. That's higher than it was when this data was first collected by the Census Bureau in 1980. Meanwhile, only 11.4 percent of white children grow up in poverty here.

• The median household income for African Americans here is half that of white households.

• In the county, only 8 percent of whites live below the poverty line, while 29 percent of African Americans are living in poverty.

The report also cites that the incarceration rate for African Americans has increased 50 percent since 1980. Twice as many blacks are going to jail and prison, and the negative effect this has on the unemployment and poverty rate of African American communities is no surprise. Taking a black man from his home only compounds high childhood poverty rates in those communities.

It all has to change — the wealth gap, the disproportionate incarceration rates, the inequality. It's been 50 years since King led thousands of sanitation workers through the streets of downtown Memphis, demanding better working conditions and higher wages. Half a century later, Memphians of color are still fighting.

Something's got to be done to reverse the generational cycle of poverty in this city. Because like King said, economic rights are both civil and human rights.