"If you wear a dress and have an animal sidekick, you're a Princess," says Maui, demigod of land and sea voiced by Dwayne "The Rock" Johnson, of Moana, the eponymous heroine of the new Disney animated extravaganza.

Moana, voiced by a high school freshman named Auli'i Cravalho, is not technically a princess, but rather the daughter of Chief Tui Waialiki (Star Wars veteran Temuera Morrison), leader of Motunui, a picturesque village on a lovingly rendered Polynesian island. But those are just details that have been temporarily glued to the ever-evolving ideal of the Disney Princess. Snow White, Belle, Jasmine, Mulan, Pocahontas — the stars of Disney's animated musicals are all gathered under the same corporate banner at princess.disney.com. They're the bait that hooks the young girls into the Disney corporate synergy machine: See the movie, buy the merch, ride the ride. It's easy to get cynical about all of it (and if you're not feeling cynical yet, don't worry, I'm cynical enough for both of us), but the truth is, Disney's just really damn good at making these movies. 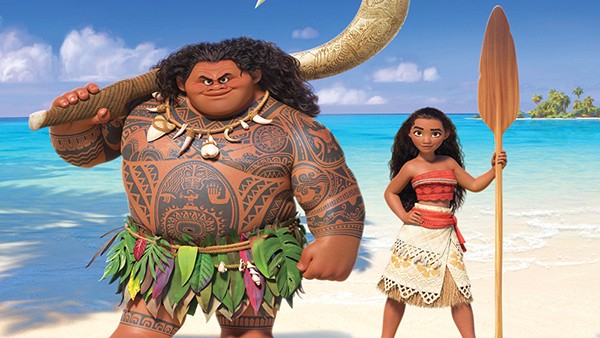 From before Homer told the story of Achilles setting out across the wine-dark sea, we've understood that kids need heroes. Stories of trials, bravery, and purpose help us fill in the blanks of who we want to be and, thus, who we become. In the past, Disney's youngest female fans had Sleeping Beauty as a hero: a character whose best qualities are her utter passivity and attractiveness to men. Now, they have Moana, and it's a big improvement as role models go. Instead of waiting for a man to come save her and drag her off into domesticity, Moana makes her own decisions. The only men in her life are her stalwart but overprotective father and the vain, tempestuous demigod. Moana is bereft of romance, and it's all the better movie for it. Instead, it's the story of a young woman trying to cajole the men around her into doing the right thing and then giving up and just doing it herself. But in stripping the patriarchy from the Princess, all that's left for directors Ron Clements, John Musker, Don Hall, and Chris Williams is a pretty straightforward Hero's Journey, complete with an eccentric, elderly mentor (Gramma Tala, voiced by Rachel House); a descent into the underworld (for a musical number with a hostile giant crab); and a good, old fashioned leap of faith.

Did you catch that there are four directors? I think that's a record for a non-anthology movie. But that's Disney under the direction of John Lasseter, who brought the fluid, iterative, team-based creative process with him from Pixar. There's one official screenwriter (Jared Bush), but at least seven people get "story by" credits — and yet the film still steals beats from Raiders of the Lost Ark and Mad Max: Fury Road. There are no missteps, but no big chances are taken, either.

The number of animators stretches well into the hundreds, and the evidence of that investment is up on the screen. Moana is one of the most gorgeous pictures Disney has ever produced. Nevermind the onslaught of stunning technical achievements, from Maui's unruly locks of curls to the nonstop water effects that would have been impossible just a few years ago — Moana is a brilliantly designed animation. The human characters balance on the edge of the uncanny valley, and they are often interacting with backgrounds and objects that are as photorealistic as anything in a Marvel movie. The visuals are more inventive than the storytelling, and the most impressive moments come in the musical interludes. There's one moment where Moana and Maui sing their way into an environment inspired by the impressionistic animation of Song of the Sea, and the contrast between the full rendered 3D CGI characters and the 2D backgrounds are like nothing I have ever seen before.

The songs, written by a team that included Hamilton scribe Lin-Manuel Miranda, are unfortunately not as memorable as the visuals. There's no "Let It Go" or "Be Our Guest" here. With the exception of "Shiny," sung by Flight of the Conchords Jemaine Clement as the aforementioned giant crab monster, the songs all kind of melt together into an unoffensive Disney goo that will one day seep through hidden speakers outside the Moana Outrigger Adventure ride at Disney World.

If you need me, I'll be in the tiki bar.