Modernizing the Vote; Bogus Ballots; and a Judgeship Kerfuffle

Shelby County should be able to hold elections with paper-trail capabilities by August 2020. Or so opined County Election Administrator Linda Phillips last week. In a pre-election speech to a luncheon of the Kiwanis Club of Memphis at the University Club, Phillips said the county is in the process of acquiring equipment that would make possible a process combining electronic scanning with paper trail records.

Phillips said, however, that there would be disadvantages to any return to voting by paper ballot alone, a course advocated in some quarters. The chief problem, she said, would be the high rate of voter error. As an example, she said that "4 to 5 percent" of absentee ballots, which are executed on paper, contain some kind of error. "And how many elections can you recall in which the margin of victory was 5 percent or less?"

The administrator said one of the biggest challenges faced by her office is that "we don't have enough full-time employees." Shelby County has 18 full-time employees but needs at least 26, she said, pointing out that Davidson County (Nashville) has 29 employees to service a voting population two-thirds the size of that of Memphis. She plans to transition her office away from what she considers its present over-reliance on temporary workers. 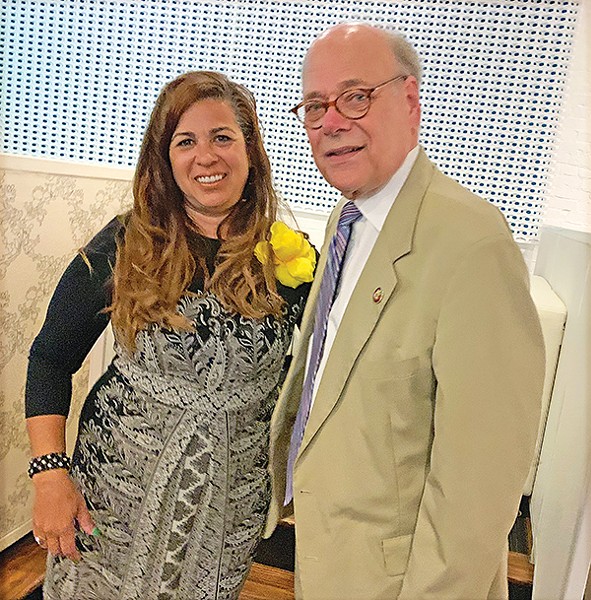 Another need is more pollworkers, she said. Shelby County employs 1,800 pollworkers at present, but their average age is 70-something, and "each year we lose more of them."

Asked about the efficacy of Instant Runoff Voting (IRV), also called Ranked Choice Voting (RCV), Phillips said the county has the capability to use the method, in which voters specify their ballot choices in order of preference, so that resampling of the votes can designate a majority winner without need for a runoff.

"The biggest problem is that the city council has not given us guidelines," she said. Shelby County voters have twice approved the process via referendum vote, and her office was prepared to use RCV in the current election, but a council majority, in tandem with the state election coordinator's office, has by one means or another managed to forestall use of the method so far.

At some point in the future, technological advances such as facial recognition could be employed to enable voter check-ins, Phillips said. "That's probably several decades away. That's not because the technology isn't there, but because it takes the legislature a long time to embrace change. Some day we'll have it."

• Ballot Battles (cont'd): It wouldn't be a local election without at least one sample-ballot kerfuffle. And, sure enough, alarms have been raised, especially in local Democratic circles about a ballot being mailed to households and passed out at early-voting polls bearing the imprimatur of the "Greater Memphis Democratic Club," a shell organization that apparently exists only to turn out sample ballots at election time.

The ballot in question, whose chief proprietor is entrepreneur Greg Grant, is one of several such ballots that appear at election time, and it is no secret that many, if not all, of the endorsees for office listed on them paid good money to get there.

City Council candidate John Marek, who first called public attention to the ballot last week, says, in fact, that he himself was solicited to purchase a place on the ballot and declined.

Despite being designated as being under "Democratic" auspices, the ballot features several candidates with known or suspected Republican identities — including council candidates Chase Carlisle, Ford Canale, and Worth Morgan, the latter, an incumbent, being Marek's opponent.

Grant's sample ballot also pictures several of the favored candidates with facsimiles of the city of Memphis official logo on their mugshots — a possible violation of city and state laws, Marek says.

Along with several pay-for-play ballots in circulation, there are also, as was noted in this space last week, various not-for-profit sample ballots in distribution locally, including a familiar one published online by Paula Casey, Jocelyn Wurzburg, and Dottie Jones (successor in that regard to her late mother, Happy Jones).

And 9th District U.S. Representative Steve Cohen, in a manner somewhat reminiscent of sample ballots put out in years past by congressional predecessor Harold Ford Sr., is a party to one —  "The Most Qualified Democrats for Change" voters' guide — expressing his preferences and those of County Commissioner Van Turner and former local party chair David Cocke, all bona fide Democrats. Cohen has in the past backed litigation against misappropriation of the name "Democratic" by purveyors of the pay-for-play ballots.

• As noted this week in the "Politics Beat Blog" at memphisflyer.com, sparks flew during a weekend forum featuring candidates for the two contested races for municipal judge.

Unexpectedly, incumbent Division Three Judge Jayne Chandler charged her opponent, Magistrate David Pool, with "dishonesty" in alleging that she was "unfair" in her conduct of her court, and that that was a reason for his several endorsements by various organizations. Pool denied making any such insinuations.

Chandler also denied rumors that she had a hand in making sure that her Division One counterpart, Judge Teresa Jones, had an opponent — lawyer LaTrena Davis-Ingram. Judge Jones, for her part, launched an attack on Davis-Ingram, who had, she said, resided, worked, and voted in Collierville right up to the point of declaring her candidacy for the Memphis judgeship. Davis-Ingram did not directly respond to the charge.

The forum fireworks seemed to  constitute a confirmation of sorts that bad feelings persist between Jones and Chandler. The third municipal Judge, Tarik Sugarmon in Division 2, is unopposed.