It may be off-season for the Grizzlies, but Memphians can still get a monthly dose of their favorite NBA team.

At Grizz Essentials, fans can receive a box filled with merchandise and team-themed items for $35 per month, available throughout the year and cancelable anytime. The price goes down to $29 a month for those who pay a year in advance.

What do you get? Past items have included scarves, pint glasses, sunglasses, posters, and T-shirts. 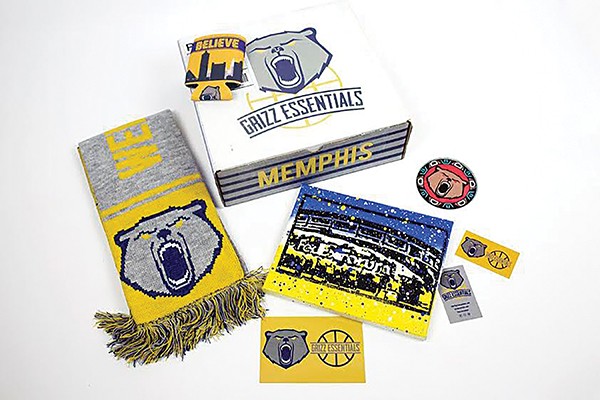 The monthly Grizzlies box is somewhat akin to a subscription to Birchbox, LootCrate, and other monthly providers of goods for various niches of culture. There are boxes tailored to vegans, beauty buffs, tech geeks, vinyl music enthusiasts, to name just a few.

Mark King, who owns Grizz Essentials with his wife, said the items are hand-picked. "When we first started, we just tried to pick things we thought people would like," he said. "We've been partnering with businesses every month. It's things I like, really — what I personally would like to have."

As Memphis moves into summer, so does Grizz Essentials. In March, when it was still a bit blustery outside, the monthly box featured a scarf. During Memphis Beer Week in April, pint glasses were delivered. It depends on the month, the season, and what the fans want, King said. A piece of artwork featured in the May box was limited to a run of 250 copies.

"We have a set budget for each box," King said. "We wanted one big item, like a T-shirt or scarf; two medium items that we try to make custom [like artwork]; and one small item. There's so much that people are doing locally that it's easy to have a variety of options."

King got the idea for Grizz Essentials from seeing his wife's subscription from ipsy, a $10 monthly bag of sample beauty products. King — a TV producer by day — joked about bringing a Grizzlies-themed service to the market. His friends thought he was crazy, but King persevered. He shipped his first boxes in February.

So far, business has been good, King said. In addition to Grizz Essentials, King is starting a project with some universities to build monthly college-themed boxes.

To learn more about Grizz Essentials, go to grizzessentials.com.