More Than a Game

How the Rhodes-Sewanee football rivalry, renewed this weekend, has shaped lives.

My son-in-law went to Ole Miss. He expects heaven to resemble the Grove on a Saturday in October. My cousin who played for Bear Bryant extols the Tide on YouTube. As for me, when I had to put a Tennessee tag on my car, I placed a small, tasteful, chrome Razorback beside it. We know the world of big-time, Division I football, with its glory and scandal. But there is also another world of college football.

On fall afternoons across the country, teams composed of regular students play good football, for the love of the game. This integration of football into the lives of serious students frames the 113-year-old rivalry between Rhodes College (formerly Southwestern at Memphis) and Sewanee, which will be renewed on Saturday, October 27th. 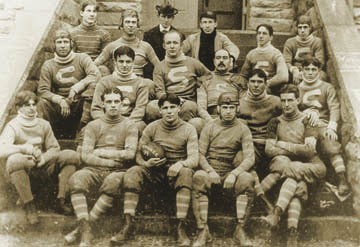 Memphis city attorney Herman Morris, Rhodes, '73, said, "It was the best of college football. We were real student athletes. On road trips, there were always books." Morris still cares deeply about those years and about one rivalry in particular. "I never lost to Sewanee," he said.

On August 19, 2012, Sports Illustrated reported: "The longest consecutively played college football game below the Mason-Dixon line (since 1899) has the manners and traditions of the South without the excesses of big-time conferences."

The games run to drama. Sewanee's Don Rodgers, a lawyer in Louisville, blocked three Rhodes punts in 2002. "It tied the record," he told me. A teammate, Nate Murphy, scooped up all three for touchdowns. "That set a record," said Rodgers, wearily. "The third one almost bounced my way, but Nate got to it first."

Rodgers, an English major, with minors in History and Spanish, told me, "I was lucky to go to a place like Sewanee, where the emphasis is on education." All his life that football will turn in the air beyond his reach.

Dick Heien, Rhodes '71, teaches at Catholic High in Little Rock. He recalled preparing for Sewanee's single-wing offense. The blocking scheme isolated the defensive end. Multiple blocking backs and two pulling guards came at a devastating angle. By game's end, defensive ends cluttered our bench, hors de combat. But they would be studying on the ride home.

How does this football compare to, say, the SEC? Mike Palazzolo, a Rhodes star in the 1980s who flirted with a pro career, told me: "Size, speed, and strength are different. But the courage, the heart, and the passion are the same."

Passion. In 1969, Sewanee had a first down on Southwestern's one yard line. From linebacker, I looked across at Randy Love and Nathaniel "Bubba" Owens. One is now a businessman; the other a judge. That afternoon, one of them would bring the ball. Teammates in front of me were Louisianans, Mike DeSalvo of New Orleans and Bill McBride of Alexandria. Three downs we held. On fourth, they scored.

Love said of Sewanee: "That's where I learned how to think and live life. I got a sense of curiosity about the world." We shaped each other's learning, as we collided over the tangled bodies of our teammates.

We want vivid experience and wholeness of life that means something. Intensity can let one dimension outbalance everything else. We need wholeness that combines intensity with proportion. In 1983, the game clock ran out with a tie on the scoreboard. A penalty gave Sewanee one last play.

Palazzolo recalled that they completed a short pass. Lynx defensive backs converged: game over. No! Out of the backfield streaked a man for the pitch. He sped into the end zone. Sewanee supporters shrieked. The rest of us knew, silently, that we had witnessed something unforgettable in this long struggle between students who also play football.

John Churchill is secretary (chief executive) of Phi Beta Kappa in Washington, D.C. From Little Rock, he played football at Southwestern (now Rhodes College) from 1967 to 1970. He attended the University of Oxford as a Rhodes Scholar and earned a Ph.D. at Yale. His knees hurt.