Mike Leigh is one of the indisputable titans of contemporary cinema, but his latest film — which shows us 19th-century England (and a bit of Europe) through the eyes of acclaimed landscape painter and grunting, ill-natured ogre Joseph Mallord William Turner (Timothy Spall) — is an altogether less pleasurable affair than either 2010's Another Year or 2008's Happy-Go-Lucky.

Mr. Turner is a long, lumpy, and weirdly dull film; for nearly half of its 150-minute run time, period details, production design, and first-rate location scouting threaten to trump any of the half-formed human and social drama on display. You find yourself thinking things like, "Oh, so that's what a pre-Victorian British art-supply store looked like!" or "Ah, so that's how the locomotive that inspired the painting Rain, Steam and Speed sounded!" or "Did John Ruskin really have a speech impediment?" 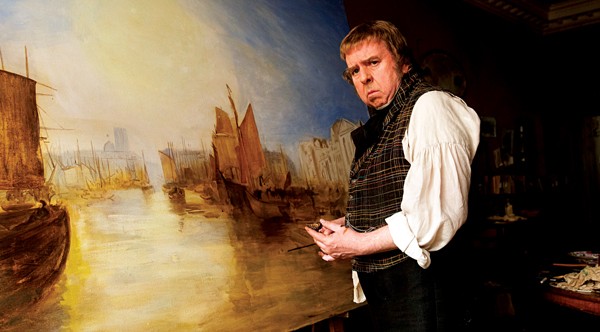 Natural-light cinematography so vibrant it looks artificial is more immediate than Turner's troubling interactions with his estranged family, his grotesque maid, and his doting dad. Eventually, though — and it took me awhile to step back and see this — these scattered, seemingly disconnected scenes add up to a full, sympathetic portrait of an irascible artist who was alive to something inside himself that others simply could not reach.

Once you realize that, Leigh's methods and techniques reveal themselves more forcefully than ever before. He and his collaborators don't forge iron links of cause and effect; they stack great and small blocks of incident on top of each other until they form something like a tabernacle for the souls they've chosen to observe and preserve for the British nation — and for us.