by Edited by Flyer staff

Since it's Burger Week and many Memphis restaurants are selling great burgers at a great price (see page 17 for details), we decided to ask a few local notables to tell us about their favorite burger. They gave us some very mouthwatering choices. Enjoy.

"Our favorite burger in town is the WJ Burger at Acre, a re-enactment of the original burger sold at Wally Joe restaurant that closed in 2007. Acre now offers these on Thursday nights. Beef dry-aged and ground in-house, confit tomato, roasted garlic mayo, truffle cheese, frisée on a house-baked horseradish bun — it's just the best. Get it medium rare." 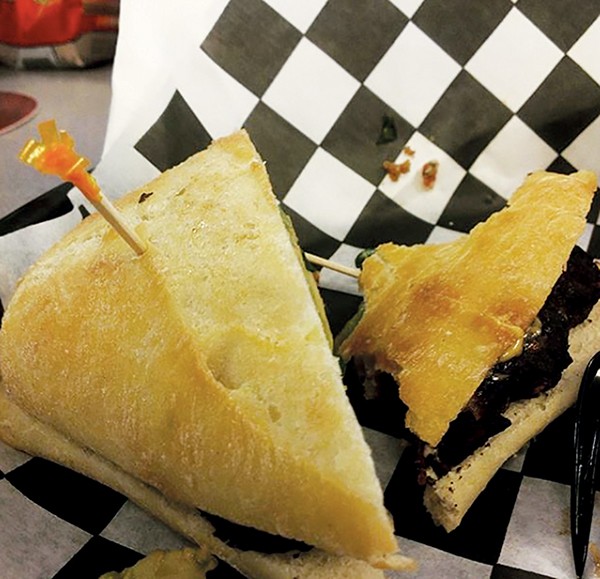 "My favorite? The black bean burger at The Office @ Uptown. I'm a new vegan, and having veggie options around town is helpful. With more Impossible and Beyond options popping up around town, this particular take on a black bean patty stands out for its taste and texture. Not quite like meat, but still flavorful enough to hold its own."

"LBOE has a garlic burger. It's no longer on the menu, but if you ask for it, they'll make it. It has so much garlic, I can't be around people after I eat it. But it is just divine. Not only is it flavorful, I love the smell of garlic. It's just so relaxing. In another life, I would be a garlic farmer. Sometimes I get it as a turkey burger, too. And it's consistently good."

"I don't eat hamburgers very often, but I am partial to the one served at Libro, the restaurant attached to Novel. A chance to browse at an actual brick-and-mortar bookstore is an increasingly rare treat. And then, to sit down to lunch over a new book and a delicious burger — perfectly cooked and covered in caramelized onions and melted cheese — makes for a perfect afternoon."

Al Kapone's favorite hamburger is a toss-up between a Tops and a Dixie Queen cheeseburger. In both cases, he says, "There's something about their cooked-to-order burgers. They both have that same almost diner burger thing about them. It's the type burger you find in any mom-and-pop store that cooks burgers. And I want my onions grilled. Something about the grilled onion flavor I can't explain. When they grill the onions, it gives a flavor the raw onions don't give. I love that flavor. I think raw onions sometimes can be too strong." And make sure and toast those buns. "If they toast the fresh bun and brush some butter on it as they toast it — oh, my God. I'm getting hungry. I want one right now."

"I have to admit, my favorite burger is generally my most recent burger. Take last night, for instance. It was 9:30 p.m. and I was starving. Tops BBQ and Steak & Shake were closed, and the golden arches were as dark as burnt french fries. I found myself in the drive-through at Krystal on Poplar. I soon realized that I was having, perhaps not a favorite burger, but rather a most-ironic burger, a burger based in deep-rooted Memphis memories — yet no different than any other Krystal burger in any other American town. As I waited in line, I saw Krystal's large poster advertising 'The Hangover' burger, which, naturally in these trying times, is now served 24-7.

"But I chose the No. 1 combo. I pulled into a parking space and began the time-honored process of getting shades of red and yellow all over my pants. I thought about how my parents would always eat at this particular Krystal when they would visit from Mississippi and how we process memories through physical shapes. But those dang Krystal marketing folks kept interrupting my thoughts with their class-struggle advertising: Each individual box containing my four burgers boasted the phrase 'IF IT AIN'T BROKE ...' — which might really mean 'If only we weren't so bankrupt (in all meanings of the word), we could be eating somewhere else or enjoying a better life.' If only Krystal restaurants looked as cool as they did in the 1950s, then I'd be feasting on Memphis history and I'd be doing it 24/7."

Graham Winchester loves Memphis food as much as he loves Memphis music. His Instagram account has been his outlet for "Poor Man's Food Reviews," which he calls "30-second bursts of mania and sloppy eating. I love putting in my two cents about some food."

Winchester won't commit to naming an all-time winner but says his favorite burger "right now" is the B-Side Memphis Burger. "It's new," he says. "It's kind of in that classic Soul Burger style, like Earnestine & Hazel's, but it's a little bit bigger. It's a flat-top grilled burger. You get pickles and cheese and onions, and they give you mustard and mayonnaise on the side, so you can dabble with it as much as you want.

"It's perfectly cooked, perfectly greasy so that the cheese and grease just kind of fill up the front of your mouth. It definitely reminds you of that Soul Burger flavor, but it's really hardy. And it comes with fries, so you're pretty fulfilled."

Memphis writer Mark Greaney (whose Bond-like Gray Man series of spy novels is now a staple on bookshelves everywhere), has two favorites: the house burger at Maximo's on Broad for high-style days, and for everyday meals, the ever-popular Dyer's burgers, famously marinated in their own ancient grease.

About the latter he says, "They are the perfect thickness, and the texture is amazing. (Anything fried is amazing!) They have an incredible beef flavor that blasts past the tanginess of the mustard and pickles."