They say that everything you read on the internet is true. I just read that country music legend and famed toupee wearer Hank Snow was onstage in the middle of a song when fiddle player Chubby Wise got his bow poked into Hank's hairpiece. (I mean that literally.) The tale goes that that the hairpiece was freed from the country legend's dome and went for a ride around the stage on Wise's bow. According to the internet, Snow screamed, "Chubby, your ass is fired!"

Snow's toupee is only part of the country bounty you can see and hear on Friday evening in Handy Park on Beale as Nancy Apple brings her Rhythm and Roots Revival to Beale Street. Apple is an essential ingredient to the Memphis music scene. She ran the local chapter of the Recording Academy for a couple of years in the 1990s and was appointed an Emissary of Memphis Music by the Memphis Music Commission. Apple has appeared in film, on television, and on countless local recordings as a back-up singer and cut records in her own right. She has some mighty cool guests with her for this show based on old-time revues. 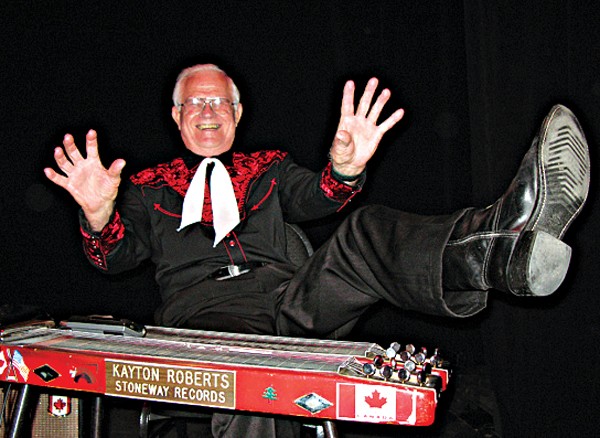 Kayton Roberts was Snow's pedal-steel guitarist for 30 years. He's along for the ride. He may know the truth about the toupee-fiddle incident. Roberts is a member of the Steel Guitar Hall of Fame. He's 84 years old. Since Snow passed away, he has played with John Fogarty, George Jones, Alison Kraus, and Hank III, among others. Rob McNurlin, Jay Ruffin, and Kenny Hays are on the bill too.

Also of interest is Dulaa, a country rap artist who has worked with Apple. The crunk raper and the Cadillac Cowgirl combine for Crunktry, a hybrid musical form that could only come from Memphis.