The city of Memphis will soon “own” the legendary downtown tourist attraction. What happens after that is still to be decided.

There's a new deal on Beale. Or there soon will be.

Final papers are expected to be filed in bankruptcy court this month, and if they're approved, city leaders — the mayor and city council — will hold full sway over Beale Street, one of the biggest tourist draws (and moneymakers) in Memphis and Tennessee.

Indeed, the sky will soon clear over Beale Street, but no one is quite sure what lies beyond the parting clouds, a fact that leaves many hopeful, anxious, or both.

But Wharton knows one thing: City officials will not run Beale Street, not in the long-term anyway. A company will be hired to manage all of the city's properties there, to develop new attractions to draw even more people to the spot, and to generally "out" Beale Street, Wharton says, "because we've simply not done that."

Of course, no one yet knows which company will be hired. Requests for proposals will be sent out from city hall, and they'll be vetted and approved by the mayor's staff and the Memphis City Council. But high on the lists of many is a company that already lives on Beale in that big Grizzlies den.

How We Got Here

This final hurdle with Performa has been a long time coming. 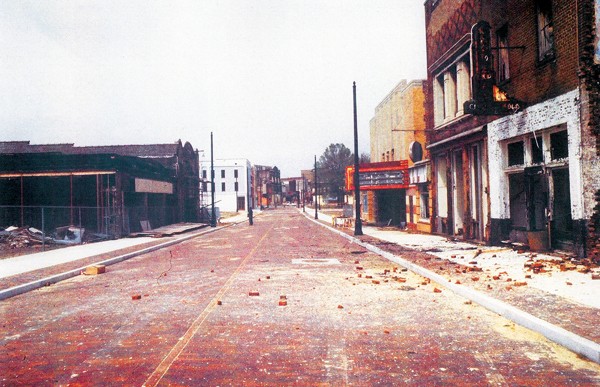 City officials decided to revitalize the abandoned street in 1982. And the city now owns most of the buildings in the Beale Street area, the same way it — and its taxpayers — owns trash bins, police cars, and copy machines.

But city officials didn't want to run Beale Street back in 1982 either, so they assigned the master lease of the property to the Beale Street Development Corp. (BSDC), and that group approved a 52-year sublease for the buildings with Performa. Performa would collect the rents, take a cut, and pass the rest to the BSDC, which developed business on the street, took a cut, and passed whatever was left over to the city.

The city claimed it wasn't getting paid by the BSDC and sued them in 1999. Then the BSDC sued Performa for the money. Performa then sued both the city and the BSDC. In 2010, Performa and the city came up with a deal to transfer management of the street back to the city. But the BSDC fought it.

Then in October 2012, U.S. bankruptcy judge Jennie Latta ruled that Performa did not owe any money to the BSDC, a decision that gave the company a clear path to transfer Beale Street operations back to the city.

City and company officials have spent the past year finalizing the details of that transfer. The last outstanding bit of work is for the city to pay Performa $600,000 for amphitheater upgrades made to W.C. Handy Park. City attorney Herman Morris has said that money will come from taxes collected on Beale Street.

Performa was expected to file the documents about the payment and the final transfer in Judge Latta's bankruptcy court earlier this month. But the company asked for a delay and is now expected to appear in court again on November 27th.

If the deal is done, Performa will be released from the turbulent deal, and the company will get 5 percent of all Beale Street rents until 2032.

"At least that [deal] has brought certainty, and you can always hope for a better deal, but this nightmare, this long nightmare, had gone on long enough," Wharton says.

The four-block strip has been called the soul of Memphis, a historical treasure, a gold mine, a sinners' den, and a tourist trap. No matter what you call it, get used to it. As long as Beale's music booms, its neon blinks, and its libations flow, it will be the Memphis icon out-of-towners will ask you about — and what the world will continue to see of the city as televised basketball games cut to commercial.

It's important to the city's history, both as a onetime thriving African-American business district and a music magnet. The latter set the stage for the explosion of music for which the city would become world-famous.

Beale is certainly a key player in drawing tourists to Memphis. But more than that, it is a strong card in the hand of those who woo event planners shopping cities for their next big conference.

Also, Beale makes money, a lot of it. And that money ripples through the entire Memphis economy. A 2011 report estimated the street's annual gross revenue to be in the $30 million to $40 million range. That money has produced more than $50 million in state, local, and federal taxes in the past 15 years, the report said.

The most basic roadmap for the future of Beale Street is a 2011 report from a blue-ribbon panel of Beale Street business owners, corporate executives, professors, politicians, and others organized by Wharton. The panel devised and published dozens of ideas about the direction of the entertainment district.

Chief among those ideas was that the city should get more control of the district as it is "an indelible part of the Memphis image to people around the world and a powerful engine in the local economy."

But the panel also recommended new directions for what Beale should be. For example, they said the street should get back to its roots, historically and musically, by better telling its history, by having more African-American-owned businesses, and by playing more "historically pure" blues music.

But even playing the blues, just one suggestion from just one of the panel's committees, exposes a reality on Beale Street and possible difficulties for more civic influence on the district: Most of those on the street now run businesses, not state-funded museums.

"We love the blues, but what's happened is that people have done what they have to do to pay their rent," says Ty Agee, president of the Beale Street Merchants Association. "So, if people play dance music at this club and that's what works for them to pay their rent and utilities and employees or if they play rockabilly at another, it's all music, man, and that's the way it is."

But day-to-day decisions like what kind of music to play are a ways off. The street is in a holding pattern until the property and decision-making power is transferred. Anything new won't emerge on the street for some time. But that hasn't stopped those involved from dreaming about the wide-open possibilities.

Wharton has said publicly he'd like to see an expansion of Beale Street but says he fears he was misunderstood.

"They thought I meant we need to build some buildings and lay down some more asphalt, but anybody can do that," Wharton says. "They got those knockoff places in Vegas that are fake, but we got the real thing. It's not a matter of growing more buildings, as it is a richer, broader depth of experience, and getting down to the taproot of what Beale Street is all about."

Wharton says he'd like to see a sign at Beale and Riverside that would help tourists find the place or to "see" Beale Street the way some "see" Hollywood by its iconic sign, a visual marker to set the place in people's memories.

But more than anything, Wharton wants to expand the offerings on Beale Street, showcasing the street's history in music and in story and drawing more people to the street. He says he's inspired by what he's seen in other cities, like the planned Great Chicago Fire Festival, which is expected to draw thousands to the Windy City.

Kane says Beale needs more daytime attractions. Agee says more live entertainment is needed in Handy Park. But basically all ideas are aimed at achieving the same goal: get more people to Beale Street, where they'll hopefully leave some of their money behind.

But one thing that likely won't change on Beale is the thrill of drinking outdoors on a public street. The seemingly simple idea is so powerful that other cities are looking to add it in their own recipes for urban revitalization.

Ohio legislators will soon consider giving the state's bigger cities the legal right to organize open-air public drinking districts. So are government bodies in Las Vegas, Nevada, Lincoln, Nebraska, and other cities. Many of these cities point to the success of Beale Street and New Orleans' Bourbon Street.

Wharton admits he only has vague notions of what new things will work on Beale or how to execute those ideas.

"That's why they have folks who do this professionally, and that's why it's best not left up to me or others," Wharton says. "We need professionals who know how to do this, and travel every day, and see what they're doing in the world."

Companies that do this kind of work will be front-runners in the hunt for a new Beale Street management firm. A deal to let the Beale Street merchants run the street was raised earlier this year but failed. Agee says they deserve a shot to manage their bread and butter.

"There are people here who could run the street better than anyone they could bring in," Agee says. "Bring someone else in, and they're going to get paid. If we did it, it'd be a glass box — everything would be aboveboard, and it would wipe out the middleman."

City council member Lee Harris says he'd like a quasi-public, not-for-profit organization like the Downtown Memphis Commission or the Memphis Convention & Visitors Bureau to manage Beale Street. He does not want another for-profit company to get a long lease.

"The interests of those parties are sometimes incompatible with those of the city," Harris says. "[Private organizations] want to risk-seek and swing for the fences, and I don't think that works in most cases."

But a new Beale manager may, indeed, already be on Beale. Wharton says he is in talks with the Memphis Grizzlies about a possible management deal. He says nothing is finalized and won't be until the city council has their say and a vote.

"The destiny of Beale Street and the destiny of the Grizzlies are inextricably tied together," Wharton says. "It's only natural that we talk long and hard with them, and we're definitely interested in that."

The Grizzlies organization did not make anyone available for questions on the topic. But Grizzlies and FedExForum COO Jason Wexler sent a statement: "In our discussion with the city and mayor, we have expressed our interest in participating in the continued visioning for Beale Street and Downtown. We understand how important Beale Street is to Memphis, and as a key stakeholder in Downtown, we want to be part of the process."

Aside from the behind-the-scenes legal battles, most agreed that there's not much wrong with Beale Street the way it is right now. Visitors can usually find something they like, whether it's daytime tourist shopping or late-night partying and dancing. The merchants make money. The city has an ace in the hole for tourism and conferences. And the Memphis economy has a strong tourist engine.

"Beale Street is a success right now, where it sits," Harris says. "It is successful and stable, and we need an operator down there who knows what they're doing. Beale Street needs a steady hand."