WMC's Fit It & Finish It will feature 10 local families.

It's around 7 a.m. on a Friday morning, and two cameramen for Fix It & Finish It are sneaking through an East Memphis yard. They settle behind a bush, and the camera guys aim their lenses at the home's front door.

Seconds later, the reality show's hunky host Antonio Sobàto Jr. pulls up in a shiny black pick-up truck. Wearing a snug green ringer tee and crisp dark denim, Sobàto hops out and heads for the door. He rings the doorbell and is quickly greeted with an enthusiastic hug from homeowner Anna Beth Studdard. 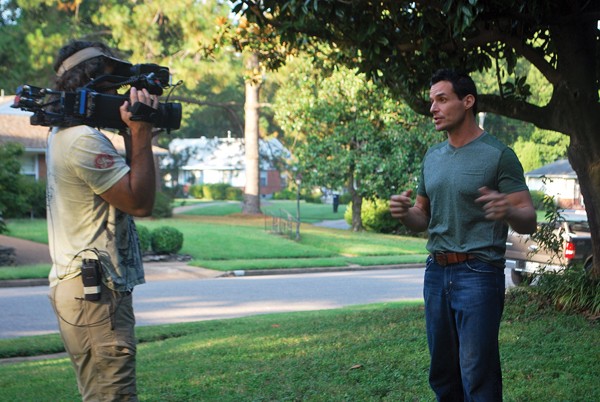 "I'm so excited!" she screams. Her husband Daniel, positioned next to her, is grinning ear to ear.

"Why are you excited?" asks Sobàto, flashing a smile.

"Because we're going to get a new backyard!" Anna Beth exclaims.

The Studdards are one of 10 Memphis families chosen for home (or yard) makeovers on Fix It & Finish It, a new reality show that began airing five days a week on WMC this past Monday.

"Antonio and his team of local designers and contractors ambush the chosen family in the morning, and we finish the entire project in one day," said the show's executive producer Colleen Snyder.

In the Studdards' case, it's a backyard project — cutting down tree limbs over the roof, installing new plants, and building an arbor-covered patio. Doing the bulk of the dirty work are local contractor Darin K. Halford and his crew and Memphis-based Summit Landscapes.

"We've never had this much rush in one day," said Summit Landscapes owner Jason Budinsky, who brought 12 guys to help pull out and replant vegetation.

Anna Beth entered the casting call after seeing a mention on Reddit. Some of the show's families have dealt with major hardship or loss, such as another episode's subject, Beverly Shelley, the widow of a local contractor who was murdered last year. But Daniel, a chef at the Tower Room, says the main reason they need help with the backyard is due to the expense.

"We just don't have the money to redo our backyard," Daniel said.

"Working on a home is a hard job. It takes time, and some people just can't get to it, whether it's because of work, finances, a new baby. We've seen it all," Sobàto said. "We did a bedroom for three boys who had taken turns trading off between one bed and the couch in Jackson, Mississippi. We gave them a new bedroom with a pirate design."

Sobàto got his big break as an underwear model for Calvin Klein, and he later starred on General Hospital and Melrose Place, among other projects. This week, Sobàto began juggling both daily Fix It & Finish It shoots and practicing for his role on Dancing with the Stars, which will premiere on Monday, September 15th. Since he'll be shooting more Fix It episodes in Memphis this week, he's practicing for Dancing at a local studio.

"It's a crazy schedule, but I've worked it out," Sobàto said.

Once they leave Memphis, the Fix It crew will head to Louisville. They're shooting 150 episodes in total.

Fix It & Finish It airs Monday through Friday on WMC at 11:30 a.m. and on Sundays at 6:30 a.m. Snyder said they do not know yet when the Memphis episodes will air.