Not very long after Marialys Gonzalez and her husband, Pedro Pena, opened Havana's Pilón on Madison in downtown Memphis three years ago, the requests started pouring in for a more eastward representation.

They kept busy serving up Cuban sandwiches, empanadas, and tres leches desserts in their small downtown eatery, eventually expanding into the bay next door and acquiring a catering job for the Memphis Redbirds.

"There are a lot of Latinos on the teams, and they get tired of the same food when they're traveling — hamburgers and that sort of thing," Pena says.

Recently the couple took the plunge and opened a second location in Bartlett.

"There are a lot of Latinos in the community there," Pena says in answer to why they chose Bartlett.

The new spot is smaller as far as table tops, but what they traded in for seating they gained in kitchen size.

"It's almost twice the size [of our downtown location]," Pena says.

The menus are almost identical, offering Ropafongo, which is Mofongo with Ropa Vieja, or shredded beef over mashed fried green plantains with fried pork skin, garlic, and olive oil ($13); Bacalao Guisado, or codfish stew, with dried codfish mixed and tossed with onions, garlic, bell pepper, olive oil, and boiled potatoes ($10, including two sides); and the prettiest little empanadas this side of the Gulf ($2.75). I had the guava and cheese. I will never be the same.

In the coming weeks, they will offer daily specials just as they do downtown, which includes two sides and a drink for only $6.95, and they are in the process of hiring a delivery driver.

"We will have catering and delivery at the new location just like [downtown]," Pena says. "It's doing excellent," he says. 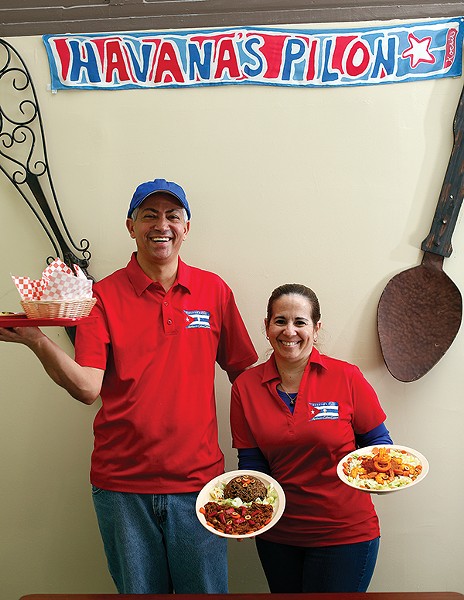 The goal was always to expand for the Kloos family, the wizards behind the Gooey Butter cookies sold at their bakeries, Frost Bake Shop.

They opened first as a wholesaler to local restaurants, including Jim's Place, Fleming's, Dixie Cafe, and Soul Fish, in 2004 out of their Bartlett baking facility.

Their first retail shop opened in Laurelwood in 2013.

Recently they spread the sugary, buttery love to Collierville, opening their second retail location this week at 1016 W. Poplar, Suite 107.

The new shop is nearly double the size of the Laurelwood mainstay, with 3,400 square feet to play with.

The menu is pretty much the same — red velvet, banana, caramel, and chocolate cakes, cupcakes, pies, cheesecakes, and, of course, the habit-forming Gooey Butter cookies, but they plan to offer wedding consultations and classes at their most recent incarnation, something that before was offered only in Bartlett.

"We love the Collierville area," owner/operator Kristi Kloos says. "I was a teacher at Bailey Station Elementary, and the city is very family oriented. They made me feel included and involved in the community."

She hopes to return the favor.

"We want to do more things that involve kids and the family in the shop, and we look forward to ways to get involved in the community," Kristi says.