‘Daily Memphian’ will launch this fall.

The Commercial Appeal came to "feel like we had a Nashville publication in town," according to the paper's former columnist (and probably most well-known face) Geoff Calkins.

He came to Memphis to write for The CA 22 years ago. He fell in love with writing about Memphis, he said, and planned to do it until "I was in my rocking chair."

"That job changed, and I found instead of focusing on journalism, I was focusing on clicks," Calkins said of the web strategies of the paper's new owners, Gannett Co. "I was writing for bosses in Nashville for a publication that was produced, laid out, printed, directed all outside the city of Memphis."

But that all ended in May. Calkins left the paper. His was one of three high-profile CA departures around the same time; food writer Jennifer Biggs and columnist Chris Herrington left about the same time. That all signaled that the rumors of some new media venture in town weren't just true, the owners had money, and meant to compete with The CA.

Official details of the venture emerged Monday. The Daily Memphian will launch this fall as an online-only news source, "grounded in the high-quality traditions of the printed word," according to the organization's president and executive editor, Eric Barnes. 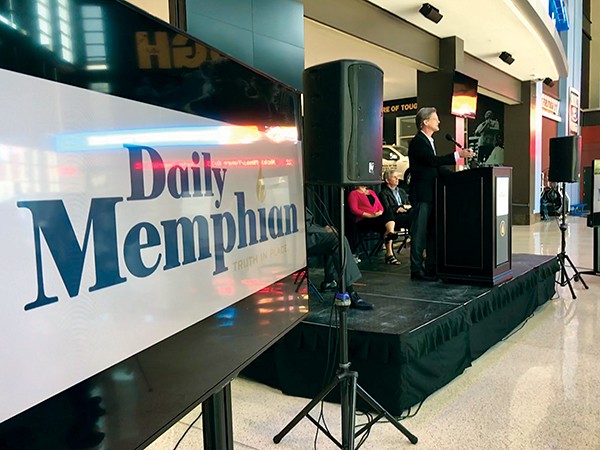 Barnes, publisher of The Memphis Daily News, joked that the Memphian project was "the worst kept secret in Memphis media." He said Memphians have jokingly approached him for years about the opportunity to compete with The CA. But in the "last three years, people have come to me with a real sense of desperation."

"It's important you understand this is about Memphis, focused on Memphis," Barnes said. "We intentionally hired people who have experience in Memphis, who could hit the ground running in Memphis, who know their beats and their people, and can deliver high-quality news on day one."

For now, the Memphian has a staff of about 25. That staff includes seasoned CA reporters like Clay Bailey, Tom Bailey, and Wayne Risher. Memphis Business Journal reporters Elle Perry and Michelle Corbet have also joined The Memphian. The current editorial staff from The Daily News will join The Daily Memphian as well.

The Memphian will be $7 per month (with your first month free). The source will also have sponsorships, events, advertising, and more. But its paywall, Barnes said, is integral to sustain the organization's business model.

"I think what we've all seen nationally is what happened when you don't pay for journalism," Barnes said. "The CA, some 15 years ago, had a newsroom of over 200 [and now has about 20]."

While Cates said it has "significant capital in the bank," Barnes noted that the organization won't be "living hand-to-mouth and donation-to-donation."