After working through some internal miscommunication, closing the doors during holiday season for inspection, operating two months without a liquor license, and weathering other tweaks and construction, Bluefin's new owner James Woo is excited about what he has to offer his customers.

Woo purchased the Main Street sushi restaurant in December after visiting the Bluff City on vacation and chatting up his friend and the eatery's former owner Jimmy Ishii.

"He was talking about selling, and I thought this was a very nice town and a very nice restaurant," Woo says. "It is similar to my hometown in South Korea, Kongju. We had a river in the town similar to here where after school we would go and fish and swim."

Woo, who has worked in the restaurant business since childhood — his great-grandfather, grandfather, and father were all in the business — endured a staff walk-out two days into his new ownership because of miscommunication concerning the staff reapplying for their jobs and working for lower wages.

He overcame the complications of living in a new city with no connections and managed to bring in some star sushi chefs, including Sang Park, who worked at Robert De Niro's famous Nobu restaurant in New York and Nishino in Seattle, as well as Brian Seo from California and two new kitchen chefs.

"One is from Japan and the other worked at the casinos, preparing Korean, Chinese, Japanese, and Thai food," Woo says. 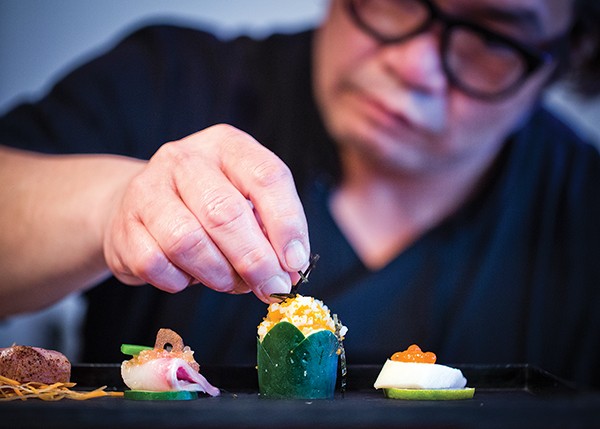 Woo has launched a new menu that includes a hibachi grill and a continuation of its edgy sushi, and, after rebuilding the lobby bar, also has plans for the small side bar north of the restaurant.

There he plans to open a coffee and tea bar that also offers healthy smoothies and other alternatives.

"I want everyone to know we are ready and open for business, and we have a new menu," Woo says.

Sean's Cafe and Smooth Moves is also getting an overhaul under new ownership, and even getting a new name.

Californian Rickie Valentino took over the Mediterranean deli and smoothie shop eight months ago and has slowly and quietly added a few new menu items while tweaking some of the old standbys.

"I love this area, Midtown. The restaurants are so eclectic with so many options and styles and cultures. The opportunity came up for this place, and that attracted me," Valentino says.

With a lineage of Lebanese, Sicilian, and Indian, Valentino has put his own stamp on some of the familiar dishes.

The swordfish, served either as a wrap, $7.99, or a platter, $11.99, which comes as a kebab with rice and two sides, is dusted with jerk seasoning, lemon juice, and peaches.

The turmeric rice is cooked in a chicken base and tossed with celery and carrots, and his shawarma, with either chicken, beef, or leg of lamb, is prepared with red wine vinegar, oregano, lemon juice, olive oil, paprika, and cardamom.

"Essentially, I wanted to create an atmosphere that offers light, good food," he says.

He's even come up with an alternative to French fries — zucchini fries served tempura-style and dusted with panko.

And vegans, take note. Balewa will be back, with his own room on the west side of the shop.

"I think he complements what I'm trying to do with my place really well. He has such extraordinary vegan cuisine, and I think the best-tasting wheatgrass in town," Valentino says.

As of now, you can still find the restaurant in the e-world under Sean's Cafe and Smooth Moves both on the web and social media, but not for long. Soon Valentino will see his own name in neon lights over the establishment under the moniker Rick's Cafe Americain (yes, just like in the movie) and Smooth Moves and in all the incarnations online.

"There's been a little buzz going around. I'm excited," he says.

Rick's Cafe Americain and Smooth Moves is open Monday through Friday, 9 a.m. to 9 p.m., and Saturday and Sunday 10 a.m. to 9 p.m. Valentino plans on extending his hours and hopefully including delivery.