New management is risky business. Just ask Louis XVI. When he was crowned king of France in 1774, the country had been ruled by guys like him — fat guys with rosy cheeks and beautiful blond wigs —for more than 1,000 years. Then the National Assembly came along, and — it was the darnedest thing — people's heads started coming loose from their bodies! Poor King Louis was among those whose head was misplaced.

Change can also be good. Case in point: Three Angels Diner. Jason and Rebecca Severs, the husband-and-wife team behind Bari Ristorante in Overton Square, did a culinary 180 when they opened this restaurant four years ago in the Broad Avenue Arts District. They chose the diner format for its flexible menu with dishes agreeable to both parents and kids and for its late-night hours to serve restaurant workers, artists, and musicians. Since then, it has consistently won acclaim, including being featured on Food Network's Diners, Drive-Ins and Dives with Guy Fieri. 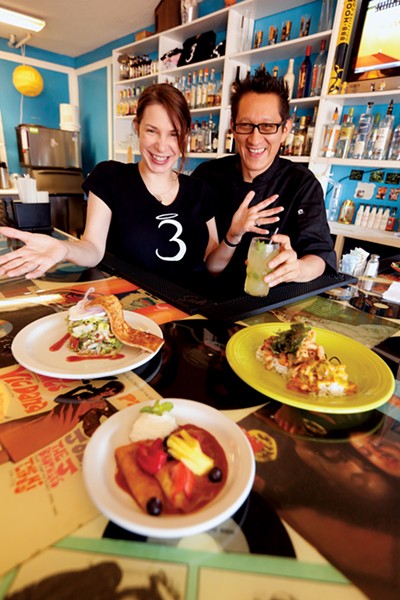 Now Three Angels is under new management. In June, the Severses sold it to Rebecca's sister and her husband, Amy and Julio Zuniga. Which begs the question: Can the new owners maintain the reputation for quality and consistency established by their predecessors?

The preliminary signs are good. On a recent Tuesday, the Carrot Ginger Soup ($3.50) was spot-on: rich and creamy with just the right amount of gingery tang. It neatly complemented the Second Angel Salad ($8), which combines grilled Portobello mushrooms, roasted red peppers, and goat cheese over romaine, drizzled with lemon vinaigrette.

On the whole, the dishes were like the restaurant itself — outside: minimal and stark-looking; inside: surprisingly tasty. And that's the idea, says chef Julio. He says he wants to steer Three Angels away from a "diner" aesthetic and more in the direction of a tapas and wine bar.

The Zunigas have opened a brand-new patio, and they plan to start serving breakfast soon. They've also renovated the menu. They're keeping customer favorites like the Colossus Burger ($9), a veritable mountain of ground beef, bacon, gouda, fried onions, and slaw. But they're adding lighter fare like the Angel Wraps ($4), crisp lettuce wraps full of panko-crusted beef and Korean slaw with ponzu sauce.

It's a revolution worth watching.

Growing up in Chickasaw Gardens, my friend Dan and I used to walk to Raffe's Deli, just down the street from Poplar Plaza. The reason was simple: They had Bomb Pops. You remember those red, white, and blue popsicles that tasted like cherry, lime, and blueberry? And melted into sticky, multicolored sludge on the back of your hand?

Back then, Raffe's was a bit of a dive, but these days a new wind is blowing at Raffe's. On May 1st, it was bought by Sean Feizkhah, who says he plans to transform it into a proper restaurant and beer market.

Just two months later, the place is hardly recognizable. For starters, Feizkhah has torn out the chunky wooden bar and the heavy curtains. The floors have also been redone. The result is a light, airy space where you might actually want to...oh, I don't know, eat.

Feizkhah says that over the next few months, he plans to continue his overhaul, which will include adding a growler station and expanding the menu to include Persian and Turkish fare. In the meantime, Raffe's continues to serve its signature Greek food.

Wanna make an afternoon of it? Buy a six-pack of Tiny Bomb Pilsner ($8.99) sourced from Memphis' own Wiseacre Brewery. Pair it with a Syrian Gyro ($6.50), a flatbread sandwich made with roast lamb and tangy Syrian tabbouleh. All right, it's no Bomb Pop; but then again, we're not 12 any more.