The days of stale beer and vodka dregs leaking all over your foot as you carry the city's small tan recycling tubs to the curb are almost history.

Earlier this month, the city's Division of Public Works began the rollout of large, wheeled recycling carts, with the hopes that the easier-to-use cart will lead to more recycling citywide. 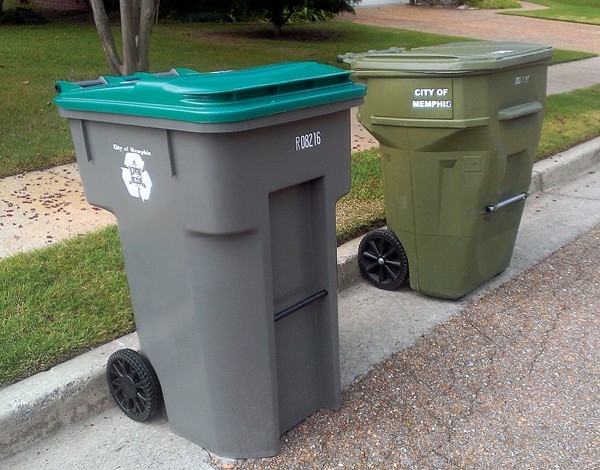 The new 96-gallon carts are five times larger than the old bins, and the recyclables no longer need to be separated before going into the container. The first 15,000 carts were distributed to residential customers in areas of the city served by the city's sanitation contractor, Inland Waste. Those include Hickory Hill, Eads, and Cordova.

Budget constraints kept the city from distributing all carts at once, but they should be given out citywide over the next three years.

In the spirit of "reduce, reuse, recycle," Maitori Spencer, a spokesperson from the Division of Public Works, said customers may keep their old bins for other uses.

After partnering with the North Carolina-based recycling company ReCommunity and making the switch to a single-stream recycling system, Public Works Director Dwan Gilliom said recycling in Memphis is now easier than ever.

The city partnered with ReCommunity in 2013 to create a single-stream recycling program, which eliminates the need for separation of paper, glass, and plastics.

ReCommunity has invested more than $5 million to retrofit their Materials Recovery Facility into a single-stream operation. The $5 million also went toward purchasing new recycling trucks. According to Karl Robe, a representative of ReCommunity, the old recycling trucks were badly in need of repair.

"The old trucks were in need of replacement, and because single-stream recycling requires trucks with less complexity and specialization, the city saved money," Robe said.

With the new bins, both the city and ReCommunity are hoping more people will be inspired to recycle. They're hoping to triple the amount of recycling the city does annually. Last year, the city's Solid Waste Management department recycled more than 9,000 tons.

ReCommunity will pay the city of Memphis for each ton of recycled material. Robe said that an increase in recycling could have a direct effect on new jobs in the area.

"Recycling brings more jobs to the region because industries throughout the southeast are relying more on recycled materials [as opposed to] mining raw material to create products," Robe said. "In addition to creating local jobs, the larger carts will help divert more recycled materials from landfills and reduce landfill tipping fees."