Nick Pena’s “Processing the Ideal” at the Dixon

Artist Nick Peña recently ordered a house online. It is a tiny house with pre-war moulding, bigger than a milk crate but smaller than two milk crates. It looks as if it was drawn directly from the Top Ten Suburban House Plans of 2003 and called something like "Timeless Country Victorian."

For his installation, Our Xanadu, Peña surrounded his miniature exburb home with orange construction fencing and placed it atop a fabricated rock ledge — one of several that he bracketed to the wall of the Mallory/Wurtzburger Gallery at the Dixon for his exhibition, "Processing the Ideal." He calls the foam ledges his "glorified shelves" and positions them much higher than eye level. 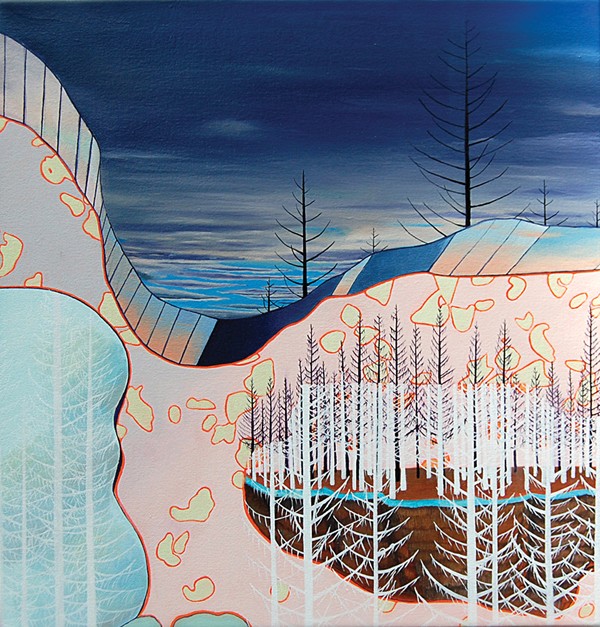 Xanadu is an entry point for the larger exhibition of Peña's recent paintings, works that combine disorienting psycho-spatial patterns with hemmed-in depictions of lifeless, middle-class American houses. In addition to creating his shelves, Peña painted the Wurtzburger walls to look as if paper is being peeled back from them, as from a half-destroyed billboard. White sections of the wall are disrupted by frenetic, line-heavy patterns, the inspiration for which Peña drew from WWI ship camouflage.

Elements of Xanadu (the bloated and dissociated landform, the unfinished and partially invisible home, busy and angular patterning) also make up the basics of Peña's paintings. Arrows to Atoms shows a brutal concrete building beneath a flat green sky in what looks to be the arid west. Beneath the building, the landscape gives way to a false, half-revealed space made from black and pink lines. Black smoke, issuing from the painting's foreground, is obscured by a line of rocks and resolves itself into clouds toward the top of the work.

In What Lies Beneath (The Perfect Cul-de-sac), two rows of blue houses recede into an orange beyond. The homes are pitched on top of open, eroded earth. The viewer sees them as if from below, from the inside of a zero-space sinkhole. Green sod is barely visible on top of the open ground. Most of The Perfect Cul-de-dac is painted flatly with the exception of the homes and a line of sediment, which collapse into the chilly neon background.

The Dixon's literature on Peña's work tells you that his paintings are about the failure of the American dream, shifting "cultural structures," and "the struggle of society to define and redefine what those structures look like in an increasingly fragmented social order." This might imply that Peña is painting nostalgic works about the failure of suburbia and the problems of "today's digital age." This is not the case. If the houses in Peña's paintings are half-built and the landscape is fragmented, it is because Peña has deconstructed them and Peña has fragmented them. The artist celebrates in the fractured spaces.

If there is a mournful note in "Processing the Ideal," it is about a lack of imagination in American design. Peña paints boring houses —Victorian country homes, stilted beach getaways, and identical cabins, and then he fixes them up with neon skies, collapsing driveways, and transcendently manipulated foundations.

Peña's work is about disorientation, but it is not exactly disorienting. The elements of each piece don't make a traditional whole, but they are combined in a way that feels complete and satisfying. Peña paints angular and silent houses and then resolves the visual problems of a plain house on a flat landscape with layers of manipulated space. His work is not "design-y" in a reductive way, but it is sensitive to composition and style.