Condo conversions take a bite out of downtown apartment stock.

When Jennie Hill returned home from college last spring, she knew she wanted something different from "my other life," as she puts it, referring to growing up in the suburbs of Memphis. Close proximity to her job as an intern architect with Looney Ricks Kiss Architects was a priority, as was being a part of the hubbub of city life.

"I wanted to be downtown because that's where stuff happens," Hill says. "There's always something going on, with plenty of cool things to do."

Though it took time, she eventually found an apartment on Mud Island she liked. She put down $300 in May as earnest money to hold a place that wasn't even available until September. And her rent, at $725 for a 630-foot studio, is steep. As more young professionals clamor to call downtown home, they may find locating a rental tricky — in a neighborhood that's increasingly tight for apartment space.

Condo conversions have played a significant role in the shrinking of apartment stock downtown. Over the past several years, signature apartment buildings like the Shrine, the Lofts at South Main, Claridge House, RiverTower at South Bluff, and Paperworks (the first warehouse-to-apartment conversion in the South Main district), have all been converted to condominiums. According to figures from the Center City Commission, 593 apartment units have gone condo. And the conversion craze hasn't stopped at downtown's doorstep. 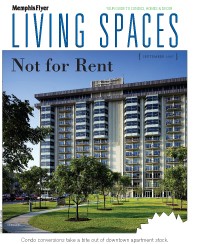 Memphis Is a Good Deal

Investors from across the country have been scooping up older high-rise properties from Midtown to Germantown. For example, the Glenmary at Evergreen (formerly Woodmont Towers) on North Parkway is being developed by the Gintz Group from Tacoma, Washington, and Nashville-based Bristol Development converted the former Park Place apartments in Germantown into a condo development called the Monarch.

Part of Memphis' appeal is its high occupancy rate, coupled with a strong national economy and the relative affordability of properties compared to other urban markets. "Investors are seeing that nationally, Memphis might be the last bastion of condo conversions because it's been overlooked for so long," says LEDIC Management CEO Pierce Ledbetter.

From a development standpoint, conversions have been a good thing for properties that were in need of refurbishing. A case in point is RiverTower at South Bluffs (formerly the Rivermark), a downtown rental property that had languished in an '80s time warp until being purchased and converted to condominiums by McCord Development, Inc., based in Houston, Texas. 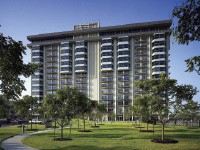 While offering exceptional views of the Mississippi River, the 240-unit complex suffered from "an identity crisis," notes Ledbetter, referring to the building's history as a hotel and later apartment high-rise, which left it with an odd mix of both spacious and cramped apartment units. With its purchase by McCord Development, an assets management and development firm, the building received a complete renovation and is now selling stylish one-, two-, and three-bedroom condo units. McCord has developed similar high-rise communities in Texas, California, and Florida.

"What [investors] like to see is a city with a reduced supply of land, high occupancy rates, and increasing rents," says Ledbetter, whose company is the largest apartment and condominium manager in the city. "That makes it much easier for banks to underwrite the loan for the property. And with so many good things going on downtown, it keeps driving the trend."

According to "The Source: Greater Memphis Area Multifamily Market Statistics for 2006," a survey released by the Apartment Association of Greater Memphis, occupancy rates downtown hover at 94.6 percent, almost five points above the countywide rate of 90 percent. (The Center City Commission — CCC — pegs downtown's rate closer to 91 percent.) Living downtown also costs apartment dwellers more. The survey, which canvassed 50,000 apartment units in 12 submarkets, looked at categories such as amenities, rents per-square-foot, and floor plans. Their findings: The average rent for a 950-square-foot apartment in Shelby County is $685, but downtowners can expect to pay $893 for a slightly smaller space, at 917 square feet. Though rents may be higher downtown, Leslie Gower, director of communications for the CCC, says their market research shows most people prefer to live where their social life is and commute to work. Since downtown's entertainment sector has strengthened, so too has its desirability as a neighborhood.

Are more apartment complexes on the horizon for downtown? Such high occupancy rates would suggest they're needed, particularly with the addition of the University of Memphis' law school soon to call Front Street home. "Downtown is probably ripe for more apartment units," agrees Amy Carkuff, who's been involved as an interior designer with a host of condo projects downtown. "I think there's a market for students and young professionals."

Manny Heckle, president of the Apartment Association of Greater Memphis and HM Heckle, a properties management firm, says, for him, the question is simple: "How many condos are selling and how many will revert back to rentals? I would say too many condos have hit the market in the last few years. I think we're condo-saturated." 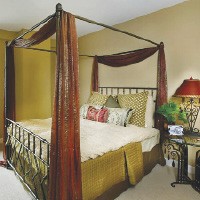 Those thoughts prompted developer Jason Wexler to put his money in the rental market. Wexler's company, Green Hat Partners, already has completed two historic rehabs (Cornerstone and Main Street Flats apartments), and he's now among a handful of developers working on creating additional apartment buildings downtown. Radio Center Flats, a project currently under way at the old WDIA building, is one of Wexler's projects; and according to the CCC, there are 14 other apartment developments in the planning or construction phase for downtown.

"We've been pretty cautious about condos and decided not to go that route because of the number that have come online," Wexler says. "We thought there was a need for more apartments in the downtown core, in part because of the number of projects that were going from rental to condo conversion." The combined buildings will eventually create 587 new apartment units. But when you consider that condo conversions have removed 593 rentals from the market, the likelihood is that the rental market downtown will continue to remain tight.

"We do minimal marketing or advertising, and our occupancy rate is 100 percent most all the time," says Wexler. "We rely on word of mouth or put an ad on apartments.com to find new tenants." 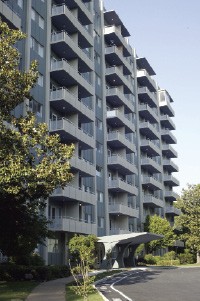 And who knows? That may simply add to the luster of nabbing a downtown address. ■