Not Fade Away: Lawrence Matthews III’s Art at the Dixon

Memphis artist catalogues crumbling infrastructure, nature reclaiming furniture, and abandoned vehicles in “To Disappear Away (Places Soon to Be No More).”

Photographer, painter, and performer Lawrence Matthews III knows how to keep himself busy. Matthews recently completed a mural at Orange Mound Community Center as part of UrbanArt Commission's District Mural Program. And in 2019, under his hip-hop moniker Don Lifted, Matthews took his Sub-Urban Tour to venues across the country. He's an artist who understands the close link between medium and message, and that understanding is borne out in his photography exhibition "To Disappear Away (Places Soon to Be No More)," on view at the Dixon Gallery and Gardens through Sunday, April 5th.

"I went to school for studio arts," says Matthews, who graduated from the University of Memphis. "I did sculpture. I did painting, photography.

"Growing up, we did everything. We skated, we played basketball, we made music, we made art, we filmed the things we were doing," Matthews explains. "I make different types of music, too. I make music under Don Lifted, and I make music under Lawrence Matthews."

For "To Disappear Away," Matthews uses his camera lens to draw attention to African-American spaces in the community. "I have these three or four themes: disappearance, nature, space, and abandonment," Matthews says of his photography. These themes are nothing new to the prolific performer and artist — that hyphen in Don Lifted's Sub-Urban Tour is no accident. "I made a film about gentrification before, but it was very specific and dug into the school systems, whereas this body of work was based around this surreal theme based around gentrification and displacement."

Matthews' work is made all the more compelling because nothing is staged. His photos capture real spaces in the world and force the viewer to ask questions about disparity. What happens when a community's environment works against the people who inhabit it? 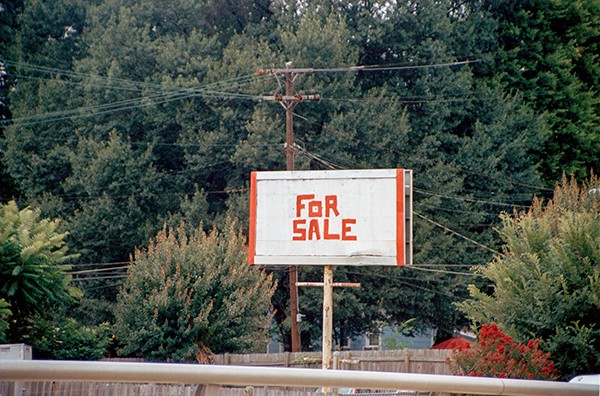 The photos on view in "To Disappear Away" appear surreal — even more so when the World Health Organization has declared the coronavirus COVID-19 an international pandemic. But these mesmerizing photos of crumbling infrastructure, nature reclaiming furniture, and abandoned vehicles were taken months before COVID-19 traveled to American shores. They were simply taken in underserved neighborhoods.

"It became a thing and then became abandoned," Lawrence says, pointing to a photo of the kids on bikes cruising through an empty parking lot. "Now it's this open, sprawling space that people are inhabiting that isn't natural, that doesn't blend in with what they're doing, that doesn't serve them in any kind of way. People don't dig up their parking lots and lay grass back."

So how does Matthews intend to combat gentrification and change the trajectory of generational wealth? "By making beautiful, surreal, and fantastical photos."

Lawrence Matthews' "To Disappear Away (Places Soon to Be No More)" is on view at the Dixon Gallery and Gardens through Sunday, April 5th. As of press time, the Dixon will be closed, beginning Tuesday, March 17th, and through Monday, March 30th, at which time the museum's leadership will re-evaluate the situation.