Peter Schutt of the newly open Curb Market, has a long history of getting his hands dirty.

After earning his degree in psychology from the University of Memphis, he went to work at a halfway house in the Pacific Northwest that, in effect, was a working farm.

"It was a residential facility for mentally ill people where we grew our food, raised chickens and milk goats, and made our own bread. The person behind it was of the philosophy that nature has therapeutic effects," Schutt says. "That was where I learned to garden and take care of animals, and it stuck with me. I have always done something with soil in my hands."

Schutt now has two farms — a 1,600-acre chemical-free, sustainable, free-range livestock farm in Dancyville and a certified organic produce farm in Whiteville, both operating under the name Winchester Farm — and his own philosophy.

"I'm a long-term fan of Wendell Berry, and he says eating is ultimately an agricultural act. That has stuck with me," Schutt says.

Berry's quote reads, "and how we eat determines, in large part, how we use our world."

Schutt has put the action part of the philosophy he shares with Berry into effect by going beyond the elimination of pesticides, herbicides, chemicals, steroids, growth hormones, or antibiotics in his own ventures.

He has created a venue where local growers and makers can get their products out there and consumers can fulfill their commitments to shop locally.

"I'm hoping word will spread that it's good to shop locally not just because it feels good, but also because it's the right thing to do. It's rebuilding the food economy and shifting the paradigm," Schutt says.

Curb Market, at 596 S. Cooper in the old Easy Way space, focuses on locally sourced food and products, with much success.

"It's been pleasantly surprising," Schutt says. 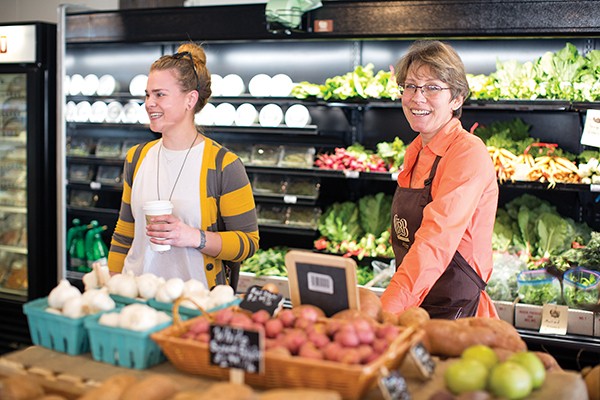 "We almost sold out the first two days," general manager Pamela Rains says. "We were here Sunday ordering all new stuff. The reception by the neighborhood has been so warm and welcoming. The enthusiasm is very touching."

"In one case, it's from three houses down," Rains says.

Even their employees are about as local as they can get.

"We did our hiring straight out of the neighborhood. Most of our employees are able to walk to work," Rains says.

They also carry soaps and other personal care items and serve up grab-and-go and deli food prepared on site with the idea of catching produce before it goes into the trash, and they plan on growing their offerings as more and more producers make themselves known.

"I had no idea the extent to which there are small craft makers. People have been coming out of the woodwork," Schutt says. "It's very gratifying."

Schutt has known the value of a local meat market for local farmers for years.

"I've been trying to develop markets for chemical-free beef and selling to various restaurants, but it's so difficult. The best way to do it is to have your own meat market," he says.

It took his life coming full circle to finally take the leap.

"I was on vacation in the Pacific Northwest [last summer]. I was reading the newspaper online, and I read where the Easy Way on Cooper was for sale. I called my lawyer friend and said to make a really good offer," Schutt says. "We got the deal done while I was 2,500 miles away. It was like it was laid there in front of me."

Schutt, who also owns the Daily News Publishing Co. Inc., sees his endeavor as an opportunity to turn the tables on industrialized agriculture.

"From a food justice aspect, this is also social justice. I know that having a retail outlet for smaller growers to sell their products locally is a way to improve and create a local food economy where all the money stays in the local economy," he says. "Most people don't realize that because they want their food the fastest and cheapest they can get it, that our food system, our soil is being destroyed, and our water is being polluted."

Curb Market's hours are Monday through Saturday 8 a.m. to 7 p.m. For more information, call 453-6880 or visit curbmarket901.com or their Facebook page.