After Brian Thurmond's restaurant 148 N. Main, near the square in Collierville, closed, P.O. Press Public House and Provisions moved in. They ditched about 50 percent of 148's stuff, says Chris Thorn, co-founder of the restaurant with chef Jimmy Gentry. The space is now what Thorn calls "refined but relaxed," with its modern grays, concrete bar top, and high-gloss table tops.

The name is a nod to the building's past as a post office and the site of the Collierville Herald. They were going to go with some hip one-name concept, but they found that all their ideas were already taken. In any case, the name goes with the restaurant's philosophy of local is better.

"Collierville was a purposeful choice," says Thorn, who has lived in Collierville for 25 years. "We serve and support local." He notes that Collierville is closer to the farms that serve as sources for the restaurant.

Among those locally sourced dishes is the rotating Local Beef Cut, featuring beef from Claybrook Farms. It comes with a carrot puree, which Thorn declares is "the best thing we put on a plate." 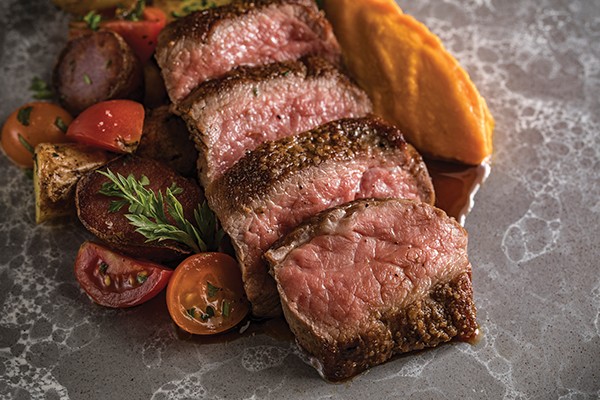 The inventive Fruit Rollup features a housemade fruit rollup, walnut brittle, cheese, fruit, and the restaurant's take on a milano cookie. It serves as a starting course or a dessert course.

The menu also offers black grouper, venison, clams, and duck. But vegetarians can feel welcomed at P.O. Press. "It's very easy to convert our menu," Thorn says. "The majority of our menu is produce-based."

One point of pride for Thorn and Gentry is the bar offerings, what they are calling a "Call to Arms." The bar is headed up by Mitchell Marable and Nick Manlavi. The bar menu is divided into three categories: "Hot Off the Press," cocktails concocted for the restaurant. They include the Me vs. Me with rum, sherry, and mezcal and the Naked Ray Gun with brandy, Cappelletti, and Fernet-Branca. "Archetypes" are the classic drinks like the old fashioned, a dry martini, sidecar, and daiquiri. "Thoughtful Revisits" are those drinks you've somehow forgotten about like the Rob Roy, Negroni, and Final Word.

Thorn says that while Collierville has plenty of burger and pizza joints, there's not so many cocktail-wine-and-food-under-one-roof places. And so far, folks seem to like it and the press has been good. But, Thorn says they don't plan to rest on their laurels. "We believe in hospitality first," he says. "The restaurant is second."

Like P.O. Press, Raven & Lily took over a defunct restaurant space in Collierville. In this case, it was Brooks Pharm2Fork on the square.

"It was an unexpected opportunity," says Amy Young, who owns the restaurant with her husband Justin, who is the chef. They decided to jump on it and not look back.

It's a bright, tidy space, seating about 80, with a picture of a raven on the wall. It reads, "Consider the raven."

Raven & Lily was born in Oakland, Tennessee, and was celebrated for its innovative dishes. The move to Collierville came in August.

Justin, who worked with Erling Jensen as far back as La Tourelle, calls his food "modern Southern comfort." He says that the food is accessible and the place is not the sort that has to be saved for a special occasion. "It's nothing over the top," he says.

The restaurant serves breakfast on the weekends, and among its offerings for lunch are the Hot Mess burger with cabbage and bacon jam; a chicken patty melt (!); and fried green tomatoes. Dinner includes shrimp & grits; fried chicken; hamburger steak with mushroom gravy; and seafood mac and cheese.

As Justin notes, all these dishes are recognizable. He says he makes everything in-house, except for the ketchup.

The Youngs say the Collierville spot is perfect for them. They like the relaxed vibe of the square. And the 80 seats is a manageable size, good for Justin who considers himself a control freak.

The name Raven & Lily comes from the Bible. "It's personal to us," says Amy, explaining, "God takes care of us."