Bailey Biggers and David Pender of Low Fi Coffee met while working at a coffee shop in California. Both had been hired for their love of the brew and their decided lack of training. The pair eventually moved to Fort Worth, Texas. Then, Pender took a gig in North Carolina. Biggers and Pender would meet in Memphis, the half-way point, to spend time together. (Aw!)

Something about Memphis felt right to them. Pender recalls asking Biggers, "You feel that?" of the city. She did. They decided to move here. "It picked us," says Biggers.

They then launched Low Fi through a series of pop-ups, first at Bozwell & Lily and then at the Brooks Museum. They've since set up shop at Stock & Belle, the South Main clothing/art/furniture store Downtown on South Main. They are currently transitioning from pop-up to permanent within the store. 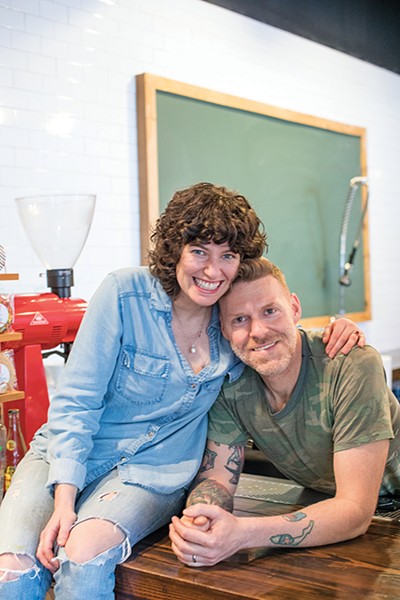 Low Fi's approach is in their name. "It's our philosophy," says Pender, "simple instruments and ingredients." What that means is that they take care to source their beans and they eschew sweeteners. They both feel that sugars and milks are used to make bad coffee taste good. A well-brewed cup of coffee doesn't need it. They also let the bean dictate the brew method. Sometimes that's a machine; other times, it's pour-over.

Low Fi offers three black coffees (espresso, pour over, and cold brew); three coffees with milk (latte, cappuccino, gibraltar); a number of teas; and novelty drinks, including a matcha cappuccino and a cold brew iced coffee. They are currently selling Hi Fi cookies, a business out of Nashville, run by a couple just like themselves.

Biggers and Pender are planning to restructure and remodel the space to make it more of an actual coffee shop. They want to expand their retail offerings — more branded stuff as well as grab-and-go items.

Pender says they've gathered a few regulars so far. Some have kept a habit from when Stock & Belle served coffee. They say, "Dealer's choice," and then they try to guess what they've been served.

Jamila Cooper says that she never drank tea, but one day, it occurred to her that peace and serenity would make a pretty great name for a tea house. So, she opened Cafe SereniTea in a cozy little house at 3545 South Third last November.

There's not much to it. A small counter space and some seating in a front room. This is all about the teas. She offers hot teas such as zesty lemon ginger, invigorating peppermint, relaxing chamomile, and classic green teas. Her iced teas are honey mint green, jasmine ginger, and strawberry lime black.

SereniTea also offers a small selection of vegetarian sandwiches, pastries, and brunch items on the weekend. They also have coffee.

Cooper cops to having a Pepsi addiction, which naturally led to harder stuff — Doritos. She kicked the habit by drinking detox teas. "It took away the cravings," she says. The tea, with tumeric, anise, fennel, and ginger, helped her lose 27 pounds, she says.

You can buy teas at the cafe to take home to brew for yourself, or you can buy them online at cafeserenitea.com.

Cooper says that, while she didn't drink much tea before, she used her background as a teacher and a mathematician to figure out the blends.

She says Cafe SereniTea is a nice place to hang out, where no one is in a hurry. "Every day, someone new comes in," Cooper says.