I've always liked sweets," says Sharon Cohn, owner of the newly open Milk Dessert Bar in Germantown. She's particularly fanatic about ice cream, she says, often making time during her travels to taste that city's local offerings. And, yes, she's been to Milk Bar in New York, the famed bakery operated under the Momofuku umbrella and headed by Christina Tosi. But, Cohn insists, the two places aren't so similar. "I admire Christina Tosi," she says. "She's a pastry chef; I don't claim to be."

Instead, she describes her style as "down-home." Her lace cookies have always been crowd-pleasers, and she's also known for her lemon squares. But, it's when this former hairdresser lets her imagination go wild that things at the Milk Dessert Bar go over-the-top. 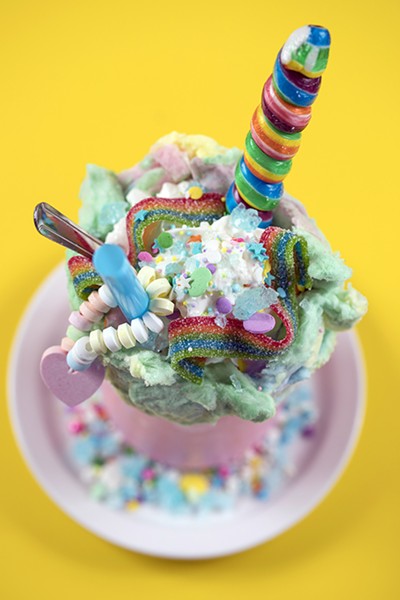 Let's start with the Unicorn Colossal. It's a milkshake made with seven scoops of pink-dyed vanilla ice cream and dressed with cotton candy, rock candy, and sprinkles. "It's not as complicated as it looks," we're told.

Shall we move on to the Milk Vortex, a combo of cereal and vanilla ice cream? Next up is the flight of cookie doughs, which may include dark chocolate pretzel, confetti, peanut butter, and s'mores.

There's banana cream pie and chocolate coconut cake, blue cakes with wave patterns, cereal milk (it is what it sounds like), and cereal by the bowl. Two cookies and a carton of milk can be had for $4.50. And you can get a plain old scoop of vanilla, if you feel like it.

Milk Dessert Bar is off Kirby Parkway near the Kroger and Sekisui. Cohn says she's had her eye on the space for a while. What she pictured was a place to hang out, where phones would be off and conversations would be had. There are board games (Candy Land, among them, naturally) and magazines and books. The decor consists of cool old funky pieces set against pretty blue-and-white tile.

Cohn says her approach is "Let's dream of something." She recently is putting that mantra into action by signing up for a master's degree in sculpting. "If I can do this," she says, "I can do anything."

Corey Smith is a lifelong Memphian whose first job was selling Icees at Libertyland, so he knows a thing or two about offering up just the thing to counter a boiling hot day.

Liquid nitrogen is added to an ice cream base and freezes at -320 degrees. This method keeps the ice crystals small, which makes for a creamier ice cream. Plus, it's pretty cool to watch it being made.

Smith recently retired from the Memphis Police Department. He opened S&B for his daughters, Serenity and Brook, the "S" and the "B."

S&B is mainly a build-your-own place. Begin with a base of either vanilla or chocolate and select two toppings — Butterfingers, pretzels, Fruit Loops, Vanilla Wafers, peaches, apples, and on and on.

Also on the menu is Philadelphia water ice, candy apples, and cupcakes.

Smith says of his time at Libertyland's Revolution Icee, "There was no better training." Likewise, he hopes to pay it forward by hiring his staff from area high schools. "They're picking things up. It teaches them a craft," he says.

Jerry's Sno Cones owner David Acklin says he's seen some familiar faces at the new space in Cordova. But maybe not as many. He's taken to standing on Germantown Parkway with a sign.

But much is familiar at the new store. The shouting pink paint on the boxy building, the garage doors, the wall to write down your greatest hopes, the Wedding Supreme, of course.

The spotted polar bear is MIA, though Acklin says he tracked one down. It was too pricey.

The menu's just about the same, though there are some additions, like Ghost Busters (marshmallow mixed with Toxic Waste) and Mystery (all the top vanilla flavors mixed together).