Sabrosura claims to serve Mexican and Cuban food; in fact, its scope is even broader. I spotted Peruvian and Ecuadorian dishes on the menu. But don't let that scare you. The different strands are brought together in the person of Sabrosura's owner, Karen Otero.

Originally from Ecuador, Otero married a Cuban man and moved to Memphis, where she has worked in Mexican restaurants for the past 12 years. She says she decided to step out on her own because she knows the business and because you can't get good Latin food in the Medical District. About the second point, at least, she's right.

"I like Cuban food the best," Otero confesses. "The way they cook is like the way we cook in Ecuador. Lots of bold flavors." 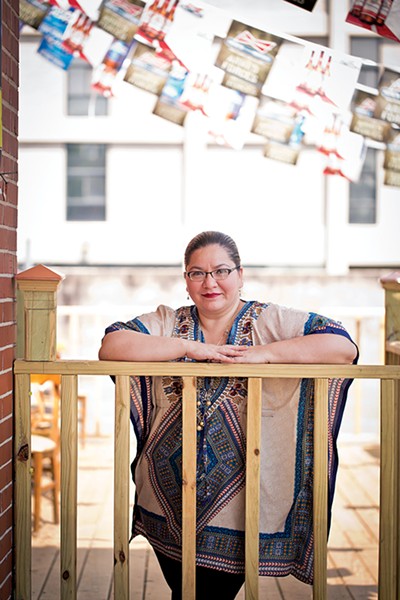 Despite having been open for just a month, Sabrosura seems to be hitting its stride. When I visited for lunch, there was a decent-size crowd of doctors and nurses from Le Bonheur, as well as construction workers and elevator mechanics from a site down the street.

When it comes to Tex-Mex, Otero has her bases covered. Want nachos? She'll make you nachos. But if you're interested in what sets Sabrosura apart, venture into the menu's less-frequented quarters, especially the section marked "Specialty of the House."

There you'll find the Arroz Tapada de Pollo ($11.99), a fragrant rice dish of grilled chicken, mushrooms, onions, and poblano peppers. I should note that, like Peter Piper, I'm picky about peppers. Add too many and they take over, overwhelming other flavors with a sharp bitterness. But Otero's Arroz Tapado is just right: piquant and sizzling and seasoned to perfection.

Or hey, why not order a steak?

Yeah, you read that right. Otero's Steak Mexicano ($13.25) is one of the better things I've eaten this month. A skirt steak that's been marinated in Mexican mojo criollo, it's grilled à la ranchera and served with pickled onions and avocado. Squeeze a little lime over it, and remember to thank God — or your lucky stars, or whatever — for the geopolitical forces that bring talented cooks from Latin America to Memphis.

You could definitely do worse than Burrito Blues. After the fashion of a Chipotle or a Qdoba, this fast-casual Mexican joint offers build-your-own burritos and bowls. The food is fresh; it's made from scratch daily; and for Beale, it's distinctly affordable. There's even a local product on the menu — the rice is from Windmill in Jonesboro, Arkansas).

You know the drill. White or brown rice? Black or pinto beans? To top your burrito, you can choose from a variety of proteins — beef, chicken, sautéed veggies — but I liked the beef options best. The steak is salty and satisfying. And the brisket — seasoned with peppadew peppers and house-smoked — is actually kind of special.

The restaurant occupies the former site of Johnny G's Creole Kitchen. With its earth tones, exposed brick walls, and relaxed blues music, Burrito Blues is a little oasis in the neon desert. Along Beale, the pace is frantic, but in here, the vibe is chill.

Burrito Blues is open for lunch during the week, and manager Richard Magevney says he's already seeing crowds from AutoZone Park and FedExForum. On weekends, the dining room stays open till midnight. After that, they'll serve burritos and margaritas to drunken stumblers through a service window until 3 a.m.

Because on Beale Street, that's how it is. You have to do high-volume; you have to do sweet drinks. Considering the framework within which they're operating, Burrito Blues has come up with a fresh, tasty, affordable option.