Howard Bell and Anthony Latiker are childhood friends who grew up across the way from each other. They rode bikes. They played in the band together at TSU. Bell played the trumpet, Latiker the saxophone. They are Westwood proud.

This is reflected in the Westwood Whole Wings, an item on the menu at Slice of Soul Pizza Lounge, the pair's new restaurant on Madison near Cleveland in Midtown.

"We didn't have a place like this when we both came up," says Bell. And by like this, he means terrifically old school — paintings of Isaac Hayes, old Bee Gees albums, Soul Train on the TV. A place to hang out and have pizza. 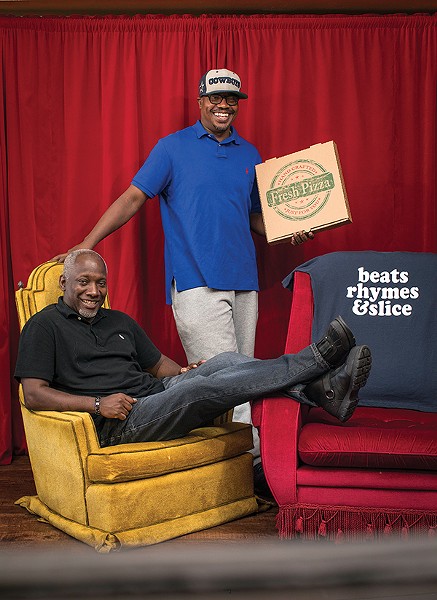 Slice of Soul's bread and butter is the flatbread pizza. The menu includes the Memphis Meat Mafia with sausage, beef, pepperoni, and bacon; the Cooper-Young Cheese; and the barbecue pizza Bar-BQ-Kays. A stand-out among the pizzas is the Al B. Green, which is dense with fresh veggies like spinach, olive, and mushrooms.

The pizzas are cut into square slices, so that will bring you back to your school days (daze?).

These guys love their neighborhood, their city. It's reflected all over the menu in the names of the dishes.

Slice of Soul also serves gumbo and salads and a nice selection of wings. The wings were Latiker's idea. Bell needed convincing. Latiker had cooked the wings for large crowds and knew Memphis as a wing city. "If you think wings are going to hit ... " Bell remembers saying. Bell has since become a convert to the wings. In fact, he says, "They're the best wings in the South. I put our wings up against anyone else."

Neither Bell nor Latiker have any restaurant experience; they are running Slice of Soul on common sense. Like serving pizza, which is relatively easy to put together (the flat breads are bought) and most everybody likes.

The plan is to have music, comedy, and open mic, and to continue to represent the city. Each has had issues with the city over the years, but they say, "Memphis is still No. 1 to us."

1299 Madison, 509-2087, sospizzalounge.com "They hear so much about it. They're so impressed with this type of food from a little spot," says Kevin Jamerson, owner of Smackers, along with Jerry Luellen. Enthusiasm for this drive-thru spot on Airways is evidenced by the line of cars around the building. There's a menu signed by Anfernee Hardaway tacked to the wall. A few weeks ago, gubernatorial candidate Karl Dean stopped by for a community event.

The menu includes the classics: hamburgers, chicken tenders, nachos, sandwiches, slushes, and milkshakes. Jamerson is particularly proud of his grilled salmon club sandwich with its house-made remoulade. The burgers, he says, "are amazing, cooked to perfection." The signature Smackers burger comes with grilled onion, bacon, and a fried egg topped with smack sauce, a chipotle/Thousand Island combo.

The salad, they say, is tasty too, and pretty much the only one around. "It's some of the freshest in the area, if you can find one in this area," Jamerson says.

The restaurant's origin story starts with a food truck, Lick the Plate. Jamerson liked the name, but settled on Smackers, as in "smack your lips."

They bought the building in September. It was a complete mess, and they had to gut it. The plan, they say, is to open a second sit-down place sometime in 2019, ideally in Midtown.

For now, it's about perfecting the craft, according to Jamerson. "We try to be different. With our freshness and quality, there's none that can compare."