Monroe has long had a wealth of restaurants and bars — McEwen's on Monroe, Felicia Suzanne's, Little Tea Shop, Bardog, Kudzu's, and Bon Ton Cafe. Now there's even a night club — although you may have a bit of trouble finding it.

Here's a hint: Follow the sound of Larry Springfield's house band — the funky grooves, the smoky vocals — and it will lead you to the corner of Monroe and Third. There, at the bottom of an unmarked staircase, in a brick basement below Bon Ton, you'll find one of the best places to hear live music in Memphis — the Suga Shack.

"We like to say we're keeping it in the cut," says co-owner Springfield. "That means it's your own private little situation — something only you and a few friends know about, and you wanna keep it that way."

Springfield is an R&B singer who has toured with Al Green, Barry White, and BB King. His songs "All the Way to Love" and "Stand by My Woman" climbed the R&B charts in the early 1990s. Today, Springfield fronts the house band at Suga Shack, where, in addition to his own songs, he sings soul standards by the likes of Marvin Gaye and Frankie Maze.

And the crowd eats it up. On a recent Saturday night, they sang along to Luther Ingram's "If Loving You is Wrong." And when it came time for Marvin Gaye's "Let's Get it On," people couldn't stay in their seats.

In between sets, DJ Len Williamson keeps the crowd moving with a series of line dances to R&B hits, songs like "Step and Stomp" by J Dallas and "Zydeco Bounce" by TK Soul. There's even a line dance for Robyn Thicke's 2013 hit, "Blurred Lines." I actually tried to learn this dance, with mixed results.

As far as refreshments, Suga Shack serves a selection of comfort food from the menu at Bon Ton — like fried dill pickles ($4.99) and chicken and waffles ($9.99). There's also an impressive array of house cocktails. Try the Sno Cone ($8), a dangerously drinkable concoction of vodka and watermelon liqueur drizzled with Blue Curacao. Open Friday and Saturday night.

Suga Shack isn't the only big news on Monroe these days. Farther up the street, on the far side of AutoZone Park, craft brewers Brice Timmons and Ryan Staggs have added a chic taproom to the front of High Cotton Brewing Company.

It seems like a funny place to put a brew pub. Fifty years ago, this neighborhood — called "The Edge" for its location between Downtown and the Medical District — was a bustling music hub, home to record labels such as Sun Studios and Phillips Recording. But these days, it's fallen into disrepair, full of empty lots and abandoned warehouses.

Timmons says that's precisely the point. When choosing a location for its taproom, High Cotton could have gone with established dining corridors like South Main or Cooper-Young. Instead, they chose The Edge with the intention of bringing some life back to this struggling neighborhood.

"Historically," says Timmons, "craft breweries have always been a source of economic revitalization. By opening a bar here, we actually thought we could do some good." 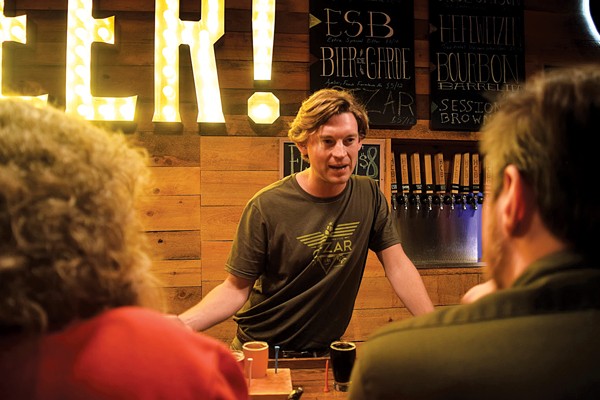 So far, it seems to be working. Since it opened on June 14th, the taproom — a spare, post-industrial space by Memphis designer Graham Reese — has consistently been crowded, and Timmons says High Cotton's biggest challenge has been keeping up with demand.

"Which, when you think about it," he continues, "really isn't a bad problem to have."

High Cotton currently serves nine craft brews, and they plan to debut a 10th — the High Cotton Pilsner — this week. The Scottish Ale ($5) is rich and chocolatey, with a beautiful, tan-coloured head. By contrast, the Biere de Garde ($5) is bright and aromatic — "a sipper, not a guzzler," in the words of one friendly bar patron.

Want a little curried goat ($8) with your beer? Come on Thursday night, when Paul's Cariflavor Caribbean Cuisine food truck is parked outside on Monroe. True to its startup ethos, High Cotton is focusing on what it does well — the beer — and leaving the food to someone else.

To that end, they have enlisted a rotating cast of food trucks to park outside the taproom on weekend nights. Other food trucks include Fresh Gulf Shrimp, Stickem, and Rock 'n' Dough Pizza Company. Open Thursday through Saturday.