In an emotional commencement address, the president honors both a school and a city.

Barack Obama came to Memphis on Monday bearing the gift of recognition that a high school, Booker T. Washington, and a city each needed to receive. While the president was here, he took aboard Air Force One some choice Memphis barbecue, courtesy of the Rendezvous restaurant and Interstate Barbecue — Memphis congressman Steve Cohen having midwifed the menu.

For one day, anyhow, it was a bona fide love match.

Giving each one of the 155 graduates of Booker T. Washington a handshake and a send-off into the post-graduate world that, surely, none of them will ever forget, President Obama delivered, as promised, the school's commencement address Monday at the Cook Convention Center.

Obama was formally introduced by Christopher Dean, the student who was featured in BTW's prize-winning video that won out over other schools' entries in the 2011 Race to the Top Commencement Challenge — the prize for which was the president's appearance at graduation.

Young Dean had been shown in the video in a state of anguish some years ago as his housing project was being demolished, a fact which would alter his place of residence and which he had then feared would make him ineligible to continue his studies at BTW, the historic predominantly African-American high school on the seam between downtown and South Memphis. 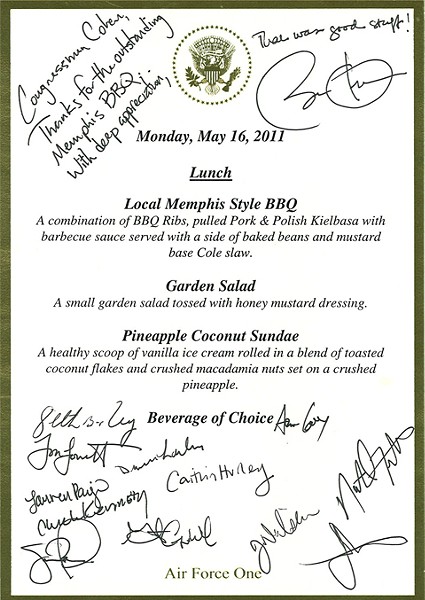 But Dean had, as the president himself would note, persevered at BTW through the medium of "two bus rides each morning," and he was onstage with cap and gown Monday to give some tongue-in-cheek details about this year's commencement speaker. Usually, Dean noted, one would explain who the speaker was (chuckle from audience), what his job was (larger chuckle) and where he lived (still larger chuckle). And also, Dean said with perfect timing, "where he was born."

"We are here today because every single one of you stood tall and said, 'Yes, we can.'"

Obama then went on to note the accomplishments that, along with the video, allowed BTW to prevail over other entries in the Commencement Challenge. They included a rising graduation rate which has led to four out of five students getting their diplomas and the fact that 70 percent of BTW's graduates had resolved to go on to pursue further studies. He reviewed several curriculum changes at BTW — special 9th-grade academies, AP classes, participation in robotics competitions. "And you didn't just create a new curriculum, you created a new culture — a culture that prizes hard work and discipline."

The president recalled for the audience some facts of his own upbringing, including the fact that he, like many of the Booker T. Washington students, had been raised through difficult times by a single mother but that his mother and grandparents had "refused to permit me to make excuses," encouraging him to pursue the education which had led to his current status in life.

"Not a single one of you has had anything handed to you on a silver platter," Obama said, and he went on to recount as examples some significant travails in the lives of Dean and another Booker T. Washington student, Eron Jackson.

Congratulating the graduates, the president concluded, "Thanks for inspiring me, and God bless you!" He then took his place in line as each student's name was called to receive a diploma, giving each of them a handshake and often a hug as they crossed the stage.

Before taking part in the commencement exercises, Obama had a private reception in a nearby ballroom with Mayor Wharton, members of the congressional delegation, and victims of the ongoing flood.

• A section of President Obama's commencement remarks to the Booker T. Washington High School graduates concerned the titanic figure for whom their institution was named — Booker T. Washington himself, African-American educational pioneer and founder of Tuskegee Institute in Alabama.

Said the president: "Booker T. Washington ran a tight ship. He'd ride the train to Tuskegee and scare some of the new students. This is before YouTube and TMZ, so the kids didn't recognize him. He'd walk up to them and say, 'Oh, you're heading to Tuskegee. I heard the work there is hard. I heard they give the students too much to do. I hear the food is terrible. You probably won't last three months.' But the students would reply they weren't afraid of hard work. They were going to complete their studies no matter what Booker T. Washington threw at them. And in that way, he prepared them — because life will throw some things at you."

Appropriately enough, perhaps, Washington's tough-love tactics reminded several former BTW graduates of the disciplinarians who had run that Memphis institution — perhaps on the example of the school's namesake.

Kenneth Whalum Jr., the Mt. Olivet Baptist Church pastor who doubles as an outspoken member of the Memphis City Schools board, was on hand for the graduation ceremony and recalled things his father, the late Rev. Kenneth Whalum Sr., a Booker T. Washington grad, told him about a legendary BTW principal, who had his own way of throwing things at laggard students:

"Blair T. Hunt, who was also the founder of Mississippi Boulevard Christian Church, gave my father the inspiration of being a pastor and being involved in politics, which was passed on to me. He would ring the school bell when it was time to go to class. If a kid was misbehaving in the hallway, he would literally throw the school bell and hit whatever child was misbehaving. As you can imagine, there wasn't much misbehaving."

That's context, no doubt, for Whalum Jr.'s consistent advocacy of returning corporal punishment to the classroom.

BTW alumnus Stevie Moore, well known as an anti-violence activist, recalled the hands-on attitude of a more recent Booker T. Washington principal, Mose Walker, who would physically track down truants who wandered into nearby retail establishments. "He'd come over to the store and come get you and bring you back to school. You don't see a lot of that now. And the principal lived right down the street."

Sondra Becton, a former administrator in the Probate Court Clerk's office and a 1968 graduate of Booker T. Washington, remembered Principal J.D. Springer, who filled the gap between principals Hunt and Walker, as being cut from the same cloth:

"He was very tough. He was a very immaculate, distinguished-looking man, but, darn it, you were going to get an education, and that was that."

Like Walker, Springer would go off campus to bring hookey-playing students back from the nearby Harlem House. And, like Hunt, he would use a cowbell as an instrument of coercion. "That was when people called that discipline," Becton said. "Now people call it abusive. But we always felt it was a great school."

Becton had words of praise, too, for current principal Alisha Kiner, who supervised BTW's efforts to win the Commencement Challenge and who has apparently achieved dramatic academic results. "That young principal has really motivated those children. It's phenomenal," Becton said.

One of the cynosures at the graduation event was former Memphis mayor Willie Herenton, also a Booker T. Washington graduate. He, too, regarded principal Hunt as having been an awesome presence, and he saw the school itself as being something of a foundry:

"Mr. Hunt was a strong authoritarian leader who inspired us to believe that we lead and others follow. He made an indelible imprint on the fabric of us Washingtonians. You know, they call us thugs. South Memphis Washingtonians have a certain set of characteristics. A lot of my behavior came from South Memphis. That high school made an indelible imprint, whether it's good or bad."

Before Obama spoke, Herenton uncannily anticipated some of the major themes of the president's graduation address. "I think when the president saw that video he saw a reflection of himself. That's the message: 'Yes, I can.' Because of teenage pregnancy many of these people are first-generation high school graduates. The message we should send to them is, they cannot stop here." 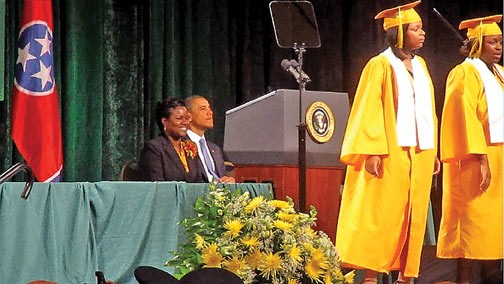 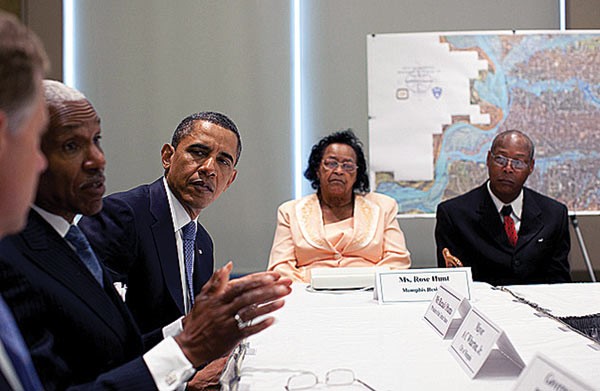