Second Line, Kelly English's latest venture and neighbor to his signature Restaurant Iris, is set to open later this month. The new place will allow English to expand on his Louisiana-inspired offerings.

"Second Line is going to be a place that speaks truly to what I would eat every day in New Orleans. We wouldn't eat crawfish étouffée or stuff like that. What we're going to serve is indicative of 'It's lunchtime. I'm going to grab a sandwich.' Or 'I'm in a bar, and I'm wasted. I want to eat these things,'" he says.

Although the dishes and the atmosphere will be more casual than Restaurant Iris, English will still have his high standards in place.

"There's a common thread of sourcing and locality and quality. But we're going to present it in very different ways. We're going to work really hard on that part of what we do," he says.

English will also be able to explore the breadth of Louisiana cuisine.

New Orleans history and tradition also provided the name for the new restaurant.

"Historically, a 'second line' was the second line of a parade. Most of the people in the second line of a parade, whether it be for racial or socioeconomic reasons, weren't allowed in the beginning of the parade. They would follow this very organized parade. So, basically, what we have at Second Line is a more casual, rowdy parade that's following this more organized parade that we have [at Iris]," he says.

English is making changes elsewhere to devote his time and energy to Memphis. Chiefly, that means he's moving on from the Kelly English Steakhouse in the Hollywood Casino in St. Louis, Missouri.

"We are pulling out of St. Louis, so we can focus on these two places. That's been a great venture, but we've got a lot going on here. They've got a whole new brand that they're putting in up there, and so it is the right time for both of us to end the relationship. I'm proud of everything we did up there," he says.

It is clear from English's attitude that there will be nothing second about Second Line. 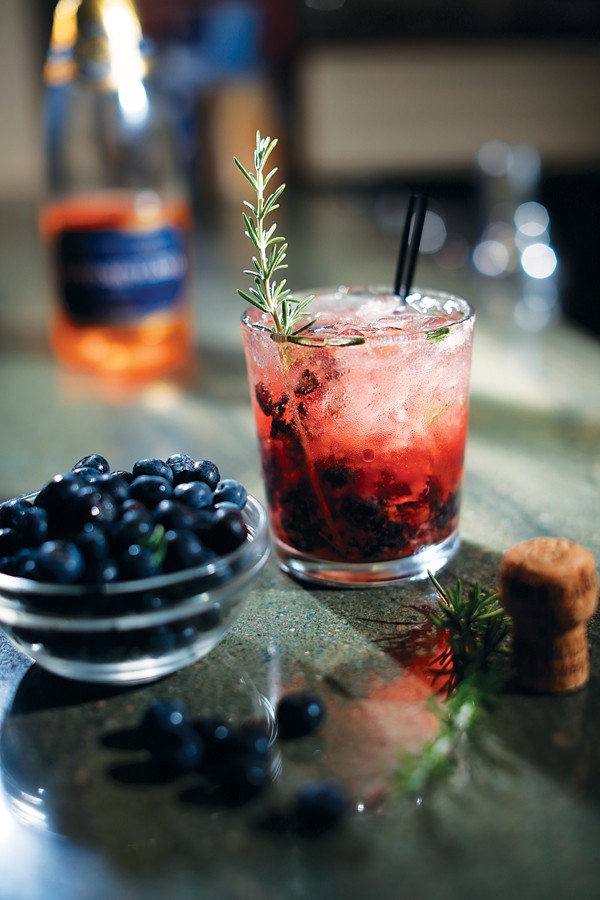 "I am as excited about Second Line as I was about opening Iris. It's the same team that opened over here. It's everything that we don't have over here. It's an open space with a big bar, and it's going to be great. I can't wait for it," English says.

While he is working to open Second Line, English will also be hosting the already sold-out James Beard Foundation's Celebrity Chef Tour at Restaurant Iris on Wednesday, October 23rd.

"The Celebrity Chef Tour is the traveling arm of the James Beard Foundation. I'm really excited, because we get to cook with people I love," English says.

English eagerly recites the lineup, which includes Andrew Ticer and Michael Hudman of Andrew Michael Italian Kitchen and Hog & Hominy as well as John Currence of City Grocery and other restaurants in Oxford, Mississippi, and Linton Hopkins of Restaurant Eugene in Atlanta.

Gerard Craft of Niche and Kevin Nashan of Sidney Street Cafe, both in St. Louis, will also be cooking.

"I think we should annex St. Louis into the South. The food they're cooking in the Midwest right now is incredible. They're really doing well. And Kevin Nashan? I hope there's someone like Kevin in every industry out there, I really do, because he's just the greatest guy that anyone could ever meet," English says.

English's culinary school classmate Eli Kirshtein from Atlanta will also be on hand. Kirshtein, who competed on Top Chef, is opening the Luminary in Atlanta in March. This trip will serve as his honeymoon.

"We don't have time for a honeymoon now. We're going to do it next year, so Memphis and Oxford have become our de facto honeymoon. For us, being able to go somewhere like Memphis and hang out with our friends seems a little more special," Kirshtein says.

"She's one of my favorite people on earth, and she helped design our pastry menu here," English says.

English, who has done a lot of traveling to wave Memphis' culinary flag, is particularly pumped to host this dinner on his home turf.

"We're really excited to have all those people here in this restaurant. It's fun to take Memphis outside of Memphis and show people what we do, but it's also fun to bring people in from outside to show Memphis some of the great friends we have and the great food that's out there," he says.