City officials look for a developer to re-shape the Fairgrounds.

The city wants to redevelop the northern part of the Fairgrounds into a private mixed-use space with retail stores and a hotel, and it's looking for someone who can pull that off.

City officials issued a request for qualification (RFQ) last week, seeking a developer who can transform the 19 grassy acres that front Central.

Near the hotel and retail spaces, the city intends to construct a 500-spot parking garage that would be available for game day parking and could house a small bus transfer station for Memphis Area Transit Authority (MATA) passengers. 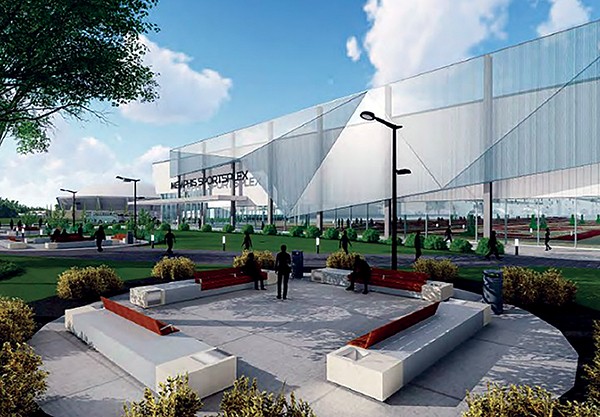 Through the RFQ, the city is also accepting concepts for reactivating the Mid-South Coliseum, which has been vacant for close to a decade.

As the city previously announced, the centerpiece of the Fairgrounds redevelopment is a 22-acre youth sports and event complex slated for the southwest corner of the site, which the city is currently designing. Proposed to be a"first-class competition facility," costing between $60 and $80 million, the complex would house indoor playing courts and a track, as well as space for trade shows and other special events.

Youth sports competitions can bring up to 1 million people annually to a city, according to Paul Young, director of the city's Housing and Community Development (HCD) division.

Based on a preliminary analysis done by Sports Facilities Advisory, the new complex would likely have 77 events in its first year resulting in about 66,000 hotel stays, and an economic impact of close to $27 million.

The city also plans to renovate the Creative Arts building that sits directly north from the proposed sports complex. The building will be turned into a museum similar to St. Louis' City Museum featuring "an eclectic mix of found objects transformed into climbable structures."

To fund the redevelopment, the city is in the process of pursuing a Tourism Development Zone (TDZ) so that tax revenue collected in the three-square-mile zone around the Fairgrounds can be allocated toward the project. The city plans to submit an application for TDZ approval to the State Building Commission by June, and officials expect to receive approval before the end of September.

Construction on the sports complex could begin as early as April 2019. Other components of the redevelopment will be completed within 10 years after the initial construction begins.

According to the RFQ, the goal of the redevelopment is to "build on the legacy and existing attributes of this historic site," while creating jobs, attracting tourists, and filling a retail deficit in the area.

"Often times we forget about the fact that when we're able to draw large numbers of people to spend time in our community, to lay eyes on our community, that helps with economic development," Young said.

Developers have until Friday, March 23rd to respond to the RFQ. The responses should note relevant project experience, preliminary concepts, and financial capacity. From there, those selected will be able to participate in the city's Request for Proposals early this summer, in order to further develop their initial ideas.