Once & Future: Tennessee Shakespeare Returns to the Forest of Arden

"Also I know what thou arte, and who was thy fadir, and of whom thou were begotyn." — Le Morte D'Arthur

I swear, this review is all about Shakespeare and sheep, but it may take me a minute to get there.

See, last night one of my teenage twins randomly started talking about King Arthur. It was a fun, speculative monologue about how different, sometimes contradictory pieces of the legend appear at different points in British history, and how all these shifts in emphasis are difficult reconcile into a cohesive story.

"Maybe this is what's really meant by Arthur living in a kind of suspended animation on the Isle of Avalon," I suggested, when it was my turn to talk again. "Maybe we resurrect him — and change the story — whenever 'England' is questioning or needing to affirm certain core values."

I share this super nerdy anecdote about my family's weird dinner conversations, because the stories we tell over and over again always serve this rhetorical need, whether they're fact or fantasy. We're always refining our past and measuring new values against convention and, for better or worse, nothing's more persuasive than old blades that cut true. Except for an old, rusty blade wielded by a wild-eyed nut who thinks it's Excalibur. Either way, the metaphor holds up well enough when applied to Shakespeare's pliable, popular, gender-wise comedy, As You Like It.

As You Like It almost always lives up to its name. Memphians have often followed the misadventures of Rosalind, Orlando, and the exiled Duke, as well as various clowns, poets, farmers and professional wrestlers as they've journeyed from urban to rural environments looking for sanctuary or satisfaction only to discover love in its infinite variety. In recent decades we've been treated to a folksy version of the story set in the Old West and accompanied by melancholy string bands. We've seen it in a few surreal dreamscapes with accordions and jug bands. We've even seen it outdoors in suburban Shelby County.

Tennessee Shakespeare Company's (TSC) revival is a charming affair with period music and costumes, and a lively atmosphere designed to conjure a romantic Elizabethan spirit. What it might lack in a unique point of view, it makes up in in clarity and accomplishment.

Tennessee Shakespeare is still settling into its new Trinity-Road home — a custom-built hall of glass and steel that wasn't custom built for them. It previously housed Ballet Memphis before the dance company packed up camp and moved to Overton Square. The building was, as TSC's founder Dan McCleary noted in a teary curtain speech, designed for bodies, not for the voice. But that's all one. TSC is completely at home and comfortable in its identity as a classically oriented company doing the classics classically. The converted dance studio, a modest and intimate echo of Shakespeare's Rose Theatre, provides this long peripatetic group, with a sense of stability and ownership it's only occasionally found performing in borrowed spaces.

As You Like It doesn't need a unique point of view to say its piece about attraction, gender identity/politics, other kinds of politics, religion, pedantry, or the urban/rural divide. It does those things on its own, if you let it. A bit of non-traditional casting only reenforces what's already there without calling too much attention to itself.

For all of its wise fooling, and keen commentary on urban affairs, it's often noted that As You Like It is also the closest Shakespeare ever came to writing a musical. The structure is all star-crossed love stories, melodrama, comedy routines, sports entertainment, and song.  Tennessee Shakespeare's never hesitated to stop any of its shows with an ancient melody or jig, and if the inescapable sounds of Christmas haven't already worn you out on "Greensleeves," the song and dance aspect's covered well enough.

Sara Malinowski and Nicolas Durreaux Picou lead the tight and versatile ensemble and make a fine couple both as Orlando and Rosalind and Orlando and Ganymede. They are strongly supported by Stuart Heyman, Merit Koch, Marlon Finnie, Claire Hayner, Caley Milliken, Gabriel Vaughn, and a large ensemble of seasoned Shakespeareans.

Of all the great clowns, Touchstone's probably my favorite. He shifts fluidly between so many classic comic types — the lawyer, the minister, the lover, the pedant, the poet, the brawler, and he's an ever attentive servant to none but his own appetites. Paul Kiernan's improvisations are forced, sometimes, but he's keen to the funnyman's word games and quick with a bit of classic fooling, and even a bit of sleight of hand. Touchstone's misguided love affair with Audrey, the shepherdess, is an especially fun lampoon of the central story that speaks many silly, sad truths about affairs of the heart and affairs of the pants.

I haven't forgotten the promise of sheep. Though, it seldom appears in any serious commentary about the text, subtext, metatext etc., there can be little doubt that an As You Like It without sheep jokes isn't an As You Like It worth sitting through. Whether one chooses to go blue and bawdy or green and wholesome, the opportunities presented by a pastoral (read "poop-mined") environment are too good to pass up, though a surprising number of productions do just that. TSC's given us a free-range affair where the wooly critters sometimes populate the entire stage, bleating, chewing their cud, and staring down the audience as only sheep can — Delivering an entire monologue's worth of editorial content with a well placed "baa." It's the most lighthearted piece in a tightly wound show made of air and imagination.

Tennessee Shakespeare's newest As You Like It may not be one for the ages. Though set in the present on a makeshift stage full of actors wearing antique and anachronistic fashion, it's certainly not one for the moment. But it is both literally and figuratively one for all seasons, and for each of the seven ages of man — suitable for all weather and ACA compliant to boot. What's not to like? 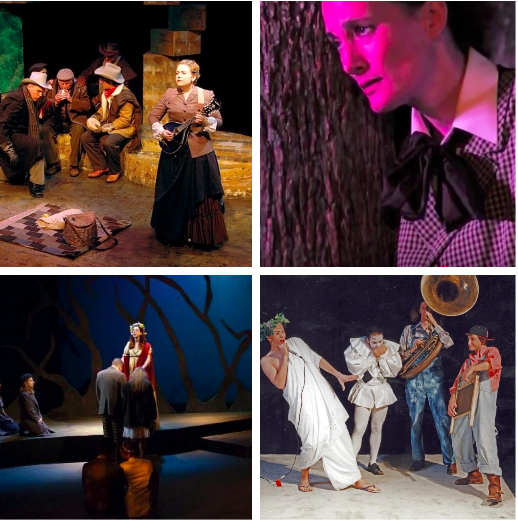 Theater Feature Review Tennessee Shakespeare Company As You Like It