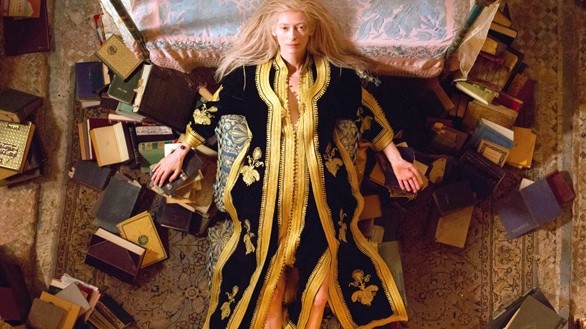 "Self-obsession is a waste of living," says the suicidally beautiful vampire wife to her suicidally beautiful vampire husband. She knows what she's talking about; she's obviously seen her man this way before. She's come to his house to rescue him. He has crawled too far into his own head for his own good, and he's even gotten someone to make him a wooden bullet for those dark nights of the soulless when he can't take it any more. But she won't let him pull the trigger. She loves him. And she's going to try to revive him by reintroducing him to the manifold miracles of the cosmos he may have forgotten: classic soul songs, mushrooms growing in mysterious places, diamonds as big as planets.

Jim Jarmusch's Only Lovers Left Alive is the best film of the year so far in part because it is so wondrously strange. How odd that something from the horror genre says more about everlasting love than most romances. How odd that a film about the undead has so much to say about what it means to be alive.

The film begins dizzyingly, as vampire couple Adam (Tom Hiddleston) and Eve (Tilda Swinton) are introduced and linked through a series of slowly rotating overhead shots that resemble the movement of a 45 spinning around on a turntable platter. This lovely, disorienting opening also foreshadows the characters' interests in ritual and transcendence. But something has gone wrong along the way; the old repetitions don't pack the same punch. As a result, Adam spends his long, long and lonely nights in beaten-down Detroit. Halfway across the globe, Eve and her friend Christopher Marlowe (John Hurt), who hid behind the name "Shakespeare" to get his writing out into the open, lurk in the streets of Tangier.

Adam and Eve are linked by their deep affection for the arts. You can't blame them: After centuries on earth, wouldn't you turn to aesthetic appreciation, too? There's a rapturous montage of Eve packing books for her trip and stopping frequently, hands gliding up and down pages written in every language, to speed-reread the ones that interest her. Adam prefers to stay indoors, crafting guitar-heavy drones that combine Tuareg desert blues with late-psychedelic noise-rock. Music fascinates them both because they've been alive forever, and as Robert Christgau once wrote, the illusion of eternity has been music's sacred mission for a good long time.

Into their relatively tranquil lives comes Ava (Mia Wasikowska), Eve's self-destructive sister. Ava is a badly scratched-up vintage single of a girl who's always playing at the wrong speed. Her impulse control is poor, her love of blood is strong, and her talent for irritating Adam is limitless. She causes problems.

That's the plot. There's more in the margins, of course, about American ruins and the sacrament of blood and the reinvigorating powers of culture. Trust me, the movie is a masterpiece. Yet these days, Jarmusch is not as famous as indie heroes like Wes Anderson or the Coens. Which is fine; he's too good for that.

Studio on the Square