Opera Memphis General Director Ned Canty hates to say no to anybody. But September's now-annual 30 Days of Opera event has grown to near capacity since it launched four years ago. And every year there are more fall festivals and events to choose from. He can't take live opera to all of them, can he?

"What we really need to figure out before next year is a way to get more access to more singers," Canty says of an event that was originally conceived as a profile-raising campaign involving one location-specific opera event per day for an entire month. Now, most days in September, the company does at least two, and often three, off-site performances. 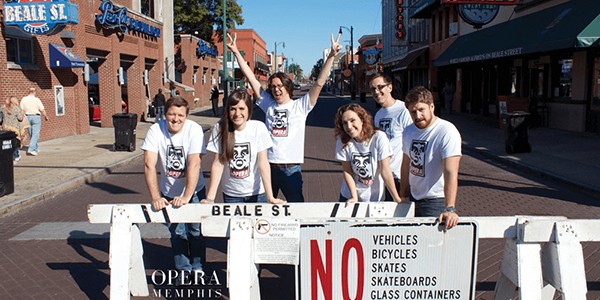 This week's 30 Days performance schedule includes a Friday-night concert at the Levitt Shell. "That's a show where we know the audience is proportionately least likely to have attended an opera," says Canty, who's always eager to get his singers in front of fresh eyes and ears. "So what we have is an open-minded audience that enjoys a lot of different types of musical experiences but are not necessarily coming to our events." He sees it as an opportunity to preview Opera Memphis' upcoming season, share some of opera's greatest hits, sing some show tunes (maybe), and engage in some derring-do. This year, Canty is pairing individual singers with Memphis street-style dancers from New Ballet Ensemble. The duos will then square off against one another in an opera-enhanced version of a jookin' dance battle.

"The concert at the Shell really kicks off our season in a way that's ecstatic and kind of, 'hell yeah,'" Canty says. "We will end with 'Bohemian Rhapsody,' which is just a lot of fun for all of us."

The concert is free, but those interested in adding dinner and drinks to the evening may want to consider paying $25 to attend ArtsMemphis' Shell Out for the Arts pre-concert event, which includes a meal by the Brushmark and chef Abby Jestis and beverages courtesy of Buster's Liquors.